USDA
24-hour: 126k soybeans for China.  USDA export sales were the best we have seen for most of the commodities in a while.

The
general weather theme for the United States has not changed much today relative to that of earlier this week. An erratic rainfall distribution is expected over the next ten days with some areas getting better rainfall than others. The next period of active
tropical weather is expected in ten days to two weeks and that is the earliest that weather in the U.S. can change again. In the meantime, higher heights aloft will bring back warmer temperatures and it will be difficult for many crop areas to get enough rain
to counter evaporation even though the GFS model continues to generate frequent precipitation.

Relief
from dryness in France and neighboring areas is still being advertised for next week. The situation will be debated for a while over how significant the relief will be, but the nation is critically dry and needs rain. A notable warm up is expected to precede
the rain adding more stress to crops and making the already stressful situation worse.

Relief
expected in France and the U.K. next week may get as far east as Belgium and a few far western Germany locations, but not much farther than that. The moisture will provide some relief from the very warm to hot weather and limited rain that is expected today
into the weekend. All of the rain will be welcome, but it will come a little too late in the summer to have a big impact on production and the greatest moisture may be a little more sporadic than desired.

Model
consistency today remains for abundant rain to fall near and immediately east of the Ural Mountains in the central New Lands over the coming ten days. Some areas may receive 2.00 to more than 5.00 inches of rain by the end of next week. Some of that same region
is already saturated or nearly saturated and that may raise some potential for flooding.

Overall,
the weather change advertised for next week will be mostly good, although concern over crop quality in the central New Lands will rise because of the wetter bias in that region.

Overall,
no significant changes were noted or expected in eastern China’s key crop areas during the next ten days to two weeks.

The
bottom line remains very good for future winter wheat, barley and canola development.  Most crop areas get rain at one time or another during the next two weeks favoring a good start to the growing season when season warming evolves soon.

The
bottom line remains one of ongoing concern for western Argentina wheat and barley in where drought remains and is not likely to change. Improving Southern Brazil rainfall next week and out through Aug. 21 will improve wheat conditions and early corn planting
conditions, but it is still questionable how heavy that rainfall will be and how far to the north it might extend. A little too much rain may impact a few wheat areas and local flooding will be possible 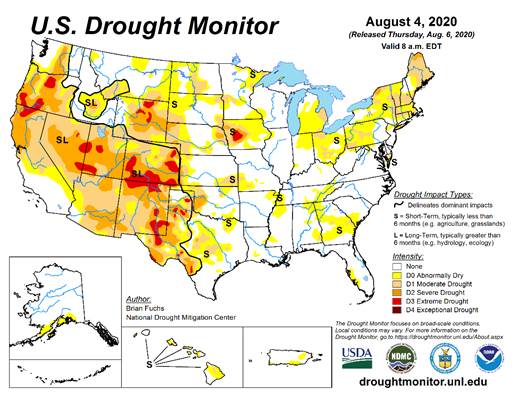 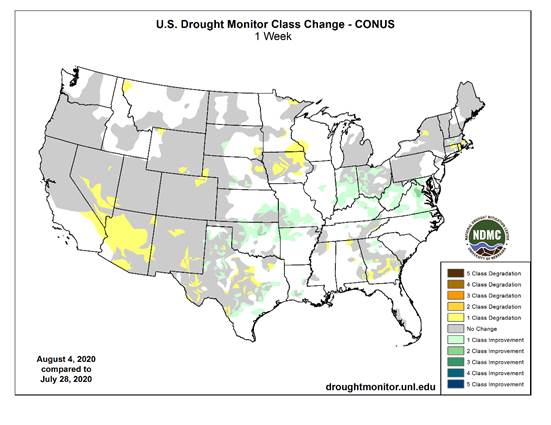 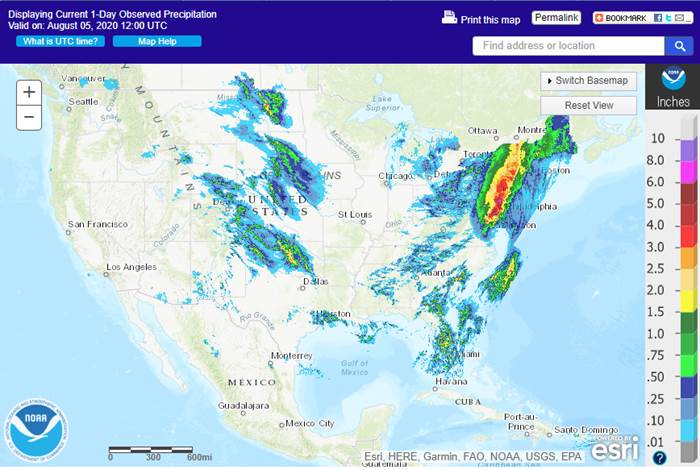 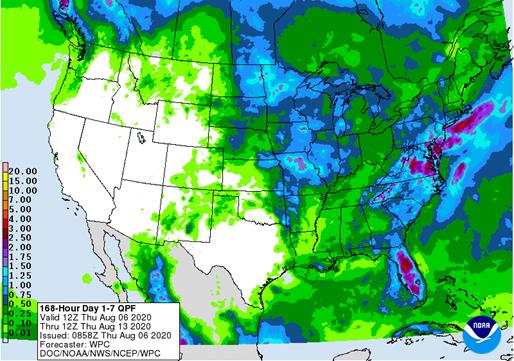 Very
good all around…

Old
crop and new-crop combined for US soybean meal export sales were impressive at over 525,000 short tons. New crop corn export sales were withing expectations at 2.6 million tons.  Old crop soybeans were withing expectations but new crop was larger than expected.
Soybean oil sales were good for old and new crop.  All wheat sales topped 600,000 tons, and total commitments are highest since 2014-15.  US pork sales were 30,300 tons.  Old crop sorghum sales showed a net reduction of 13,300 tons but new crop added 211,600
tons, including 75,600 tons for China. 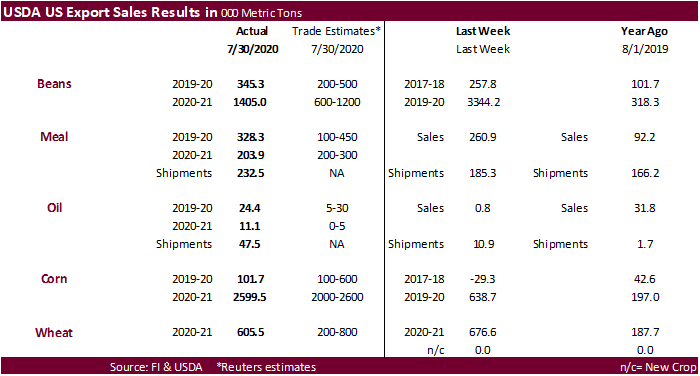 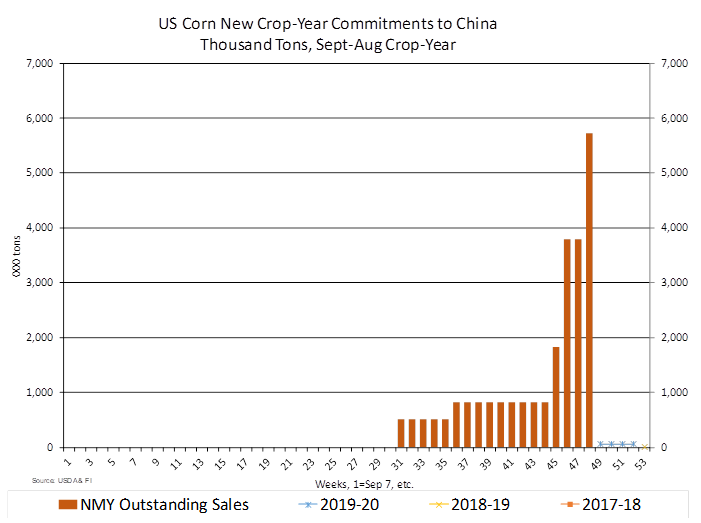 This summary is based on reports from exporters for the period July 24-30, 2020.