As Chinese refiners slowly ramp up runs toward pre-coronavirus levels, crude producers are angling for market share amid a shrinking demand scenario, an analysis from S&P Global Platts showed Monday.  Crude production cuts agreed upon over the weekend by OPEC and its allies are expected to take 9.7 million b/d of crude off a market where demand has fallen drastically and supplies continue to build.  On Monday, Saudi Arabia slashed the official selling price for all Asia for a second month in a row to entice buyers in a buyers’ market.

However, Asian crude market sources said buyers were holding out to see what other producers in the OPEC+ agreement would offer in the way of official selling prices before committing to June barrels.

As the curve for new coronavirus cases in China began to flatten in mid-February, travel and other restrictions were lifted in Wuhan, seen as the center of the pandemic, and regional power generation and transport demand have been rising, supporting a slight tick up for some refining margins.  Last Thursday, Chinese cracking margins for Saudi Arabia’s Arab Light were 90 cents/b, up from the minus $1.06/b at the beginning of the week, while Chinese cracking margins for Russia’s ESPO stood at minus $4.91/b, compared with minus $5.55/b on Monday, according to S&P Global Platts Analytics.  Russia and Saudi Arabia are two of the largest crude suppliers to China, and as run rates rise, the producers are vying to capture share of a much smaller market than before the coronavirus pandemic.  Platts Analytics saw China’s February crude runs drop to 10.24 million b/d, a 20.7%, or 2.7 million b/d, decline from February 2019.  China’s March refinery runs are estimated at 11.17 million b/d, a 13.2%, or 1.7 million b/d, loss compared with March 2019.  Platts Analytics said China’s independent refineries "which did shut down their CDU during the coronavirus outbreak, planned to recover sooner than our expectations," with 12 of the 13 independent refineries that had unplanned CDU outages restarting units by March.

Global crude supplies around the world are rising as refiners everywhere are cutting runs to meet the drastic demand fall-off caused by the coronavirus pandemic.  Over the past six months, global crude inventories have risen by 250 million barrels, with about 132 million barrels added in the past month.  This rise in supply dwarfs demand even with Chinese refineries raising run rates.  The average run rate at China’s independent refineries in eastern Shandong province reached about 58.9% in March, up from a four-year low of around 44% in February, Platts Analytics said.  March crude imports into China’s independent refineries rose to 2.88 million b/d from the 2.18 million b/d in February, including cargoes of both Saudi Arabian and Russian crude.  State-run refiners were also seen slowly increasing their runs despite the mismatch between plentiful crude supplies and weak product demand weighing on margins.  Platts Analytics does not expect China’s monthly crude runs to exceed December 2019 levels until August 2020, "given the global pandemic demand loss scenario case."  China’s annual oil demand growth for 2020 was revised down to 14.41 million b/d, or 2% lower than that of 2019, Platts Analytics said.  First-quarter Chinese oil demand is expected to be 12% lower year on year, with second-quarter demand down 7.2% year on year before moving back into positive territory in the third quarter with a 3% rise.  China’s second-quarter gasoline demand will fall by 8.8% year on year to 3.19 million b/d "on limited travel ranges due to local government policy restrictions," Platts Analytics said. 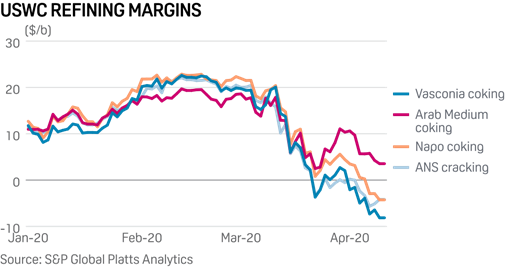 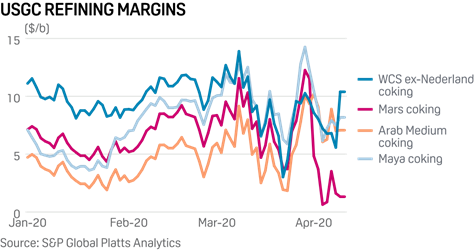 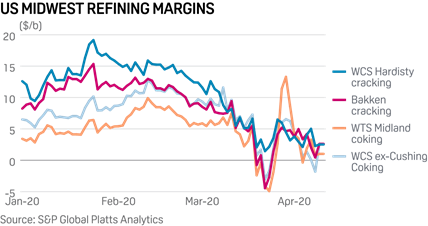 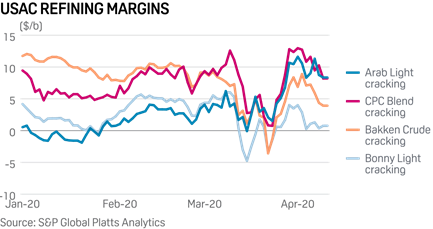 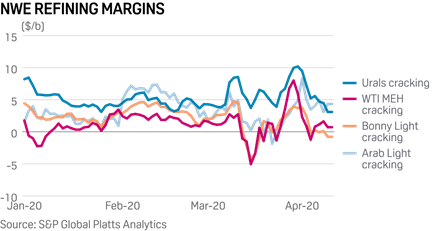