・         6-10 day was wetter in the central and southwestern Midwest, and drier in the southern Delta. For 11-day, the precipitation outlook is drier in the Midwest and north central Plains.

・         Note critical rain will fall through Tuesday across southern IA before a week of dry weather sets in. Next critical rain even will be during the August 15-17 period. 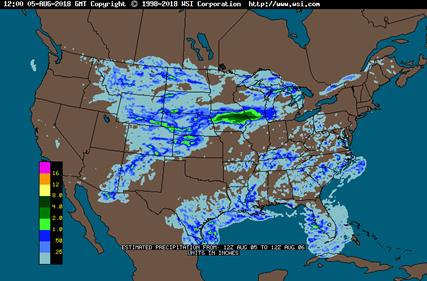 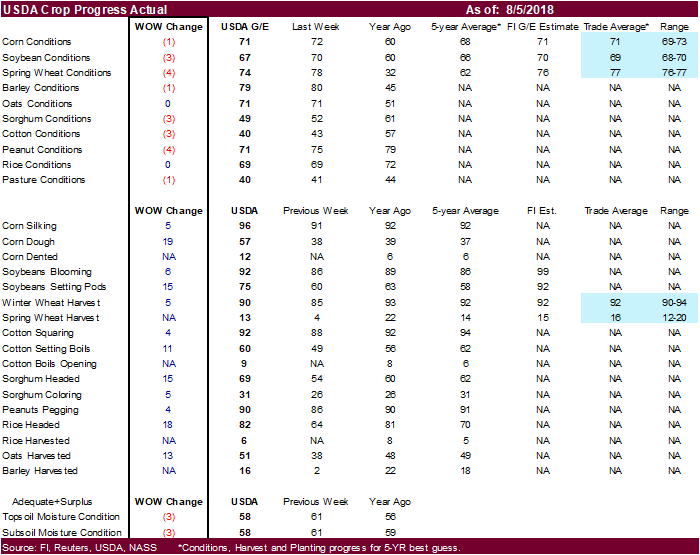 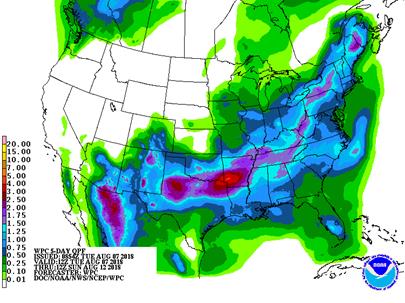 ・         US stocks are higher, USD lower, WTI crude higher, and gold higher, at the time this was written.

・         US crop conditions declined one in corn for the G/E categories from the previous week, in line with our estimate and a Reuters trade average. G/E conditions for PA fell 10, ND was down 5, SD down 5, Missouri off 7, and IA fell 3.

・         The Bloomberg poll shows a US corn production low/high of 14.210-14.740 billion, or 530 million bushel spread, with an average of 14.416 billion, 186 million above USDA. FI is using 14.543 billion, 127 million above the Bloomberg corn production average. If we are correct on our corn supply and ending stocks estimates for US corn, and are right on our soybean estimates, we look for soybean/corn spreading post USDA report on Friday.

–Optional origin sales of 179,000 metric tons of corn for delivery to unknown destinations during the 2018/2019 marketing year.  An optional origin contract provides that the origin of the commodity may be the U.S. or one or more other exporting countries.

・         Soybeans are higher on a drop in US crop conditions and a weather forecast calling for dry weather during the last half of this week for the Midwest during the critical pod filling stage.

・         The CNGOIC lowered its outlook for 2018-19 China soybean imports to 94 million tons from 95 million, and sees 2017-18 imports at 95 million tons, also down 1MMT from previous. They see July-Sept. soybean arrivals at 26MMT and noted Chinese soybean crushers are intentionally delaying inbound shipments as supplies of the oilseed from state reserves are ample. China 2018-19 soybean meal consumption est. at 74.48MMT.  (Bloomberg)

・         Traders look for Malaysian palm oil stocks to hit a 5-month high. We expect a gradual draw over the next several months.

・         US soybean crop conditions dropped 3 points in the combined G/E categories. We were looking for unchanged after the ECB saw good rain over the past week, while the trade estimated at 1 point decrease. Missouri fell 6 points in the G/E, ND down 9, SD down 4, and IA was down 3. IN was up 1 and IL was unchanged. 75 percent of the soybean crop is setting pods so weather now across the US is critical. Note the US WCB will see another long period of net drying starting Wednesday.

・         A Bloomberg poll calls for U.S. soybean ending stocks to come in at about 648 million bushels versus USDA’s estimate of 580 million in July, and the soybean yield to be initially surveyed by NASS at 49.8 bu/ac versus their working estimate of 48.5 bu/ac. FI is looking for 49.0 yield and US ending stocks to increase to 616 million bushels. If we are correct, soybeans could be friendly after the release of the report on Friday.

–Export sales of 145,000 metric tons of soybeans for delivery to unknown destinations during the 2018/2019 marketing year.

・         The US wheat/corn ratio hit a three-year high and should continue to climb higher over the coming weeks.

・         US spring wheat ratings declined 4 points in the combined good/excellent categories, much larger than the 2 point drop we were looking for, and one point decrease estimated by the trade.

・         US winter wheat harvest progress increased 5 points to 90 percent. The trade was looking for a 7 point increase.

・         US spring wheat harvest progress increased 9 points to 13 percent. The trade was looking for a 12 points increase.