Today is a US holiday so government reports are delayed until Tuesday.

·         Heavy rain fell over the weekend from West Texas through a part of Oklahoma and Kansas to southeastern Iowa southern Wisconsin, southern Michigan and northern Ohio.

·         Tropical storm Michael and Hurricane Sergio will bring additional rain into the southwestern states and southeast this week. For the rest of the Midwest look for heavy rain to continue to fall bias WCB through Wednesday with 1-3”, locally 3-5”, similar to what we saw over the weekend.

·         US weather next week will yield limited precipitation and cooler temperatures. Fieldwork progress will be most beneficial bias the ECB.

·         The Canadian Prairies will see drier weather over the next week, but cool temperatures are expected to slow fieldwork progress. Alberta could see snow this week.

·         Brazil weather over the next two weeks will include precipitation for most areas except for the northeast.

·         Argentina will see a drier bias for the west-central and northeast. 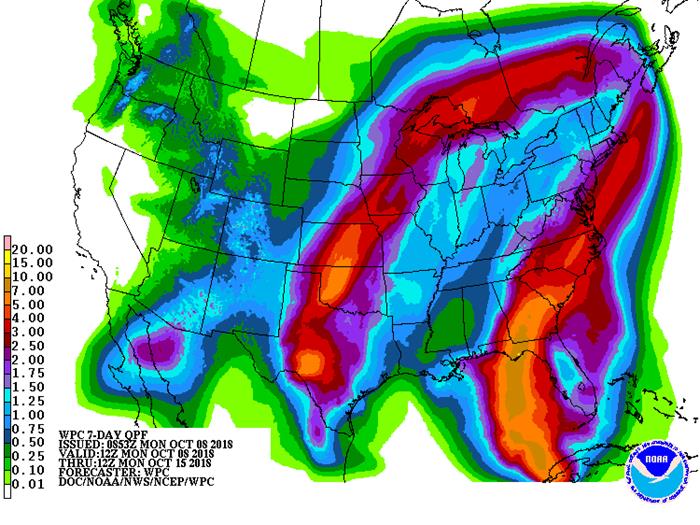 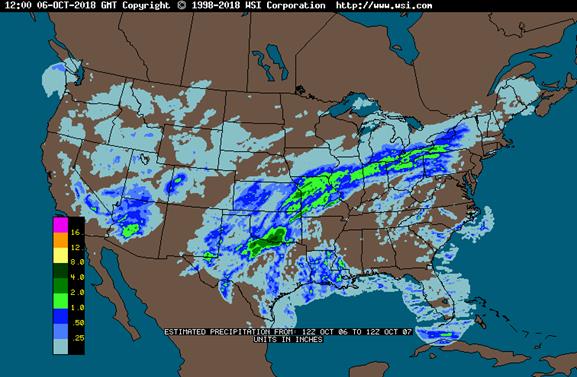 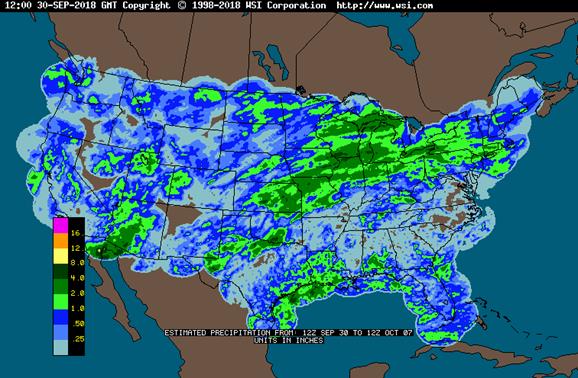 ·         Soybeans are lower as weekend weather was about as expected.

·         Brazil’s Sunday election narrowed the candidates to two leaders and will head to a second round of voting October 28 between right-wing Congressman Jair Bolsonaro and leftist rival Fernando Haddad. The Right-wing Brazilian presidential candidate promised to shrink the government, reduce payroll taxes and privatize many state companies.

·         Soybean oil is lower on sharply lower crude oil. Soybean meal is off but don’t discount a two-sided trade.

·         MPOB will release September trade data on October 10. A Reuters survey on palm oil production calls for a 14.7 percent in September from August.

·         Rotterdam oils were lower and SA soybean meal when imported into Rotterdam higher.

·         AgRural estimated Brazil planted 10 percent of their soybean crop, double than that of last year.

·         Safras & Mercado reported new-crop brazil soybean sales as of October 1 at 27.3 percent, up from 14.1 percent at this time last year, and compares to an average 30.2 percent. Safras is using 121 million tons for 2019 production. Conab is due out soon with their estimate.

·         Wheat is lower (US markets) on lack of direction and upward revision to the Russia wheat production by IAKR from 69.3 million tons to 69.8 million tons.