·         Additional cold weather could occur across eastern Australia this week. 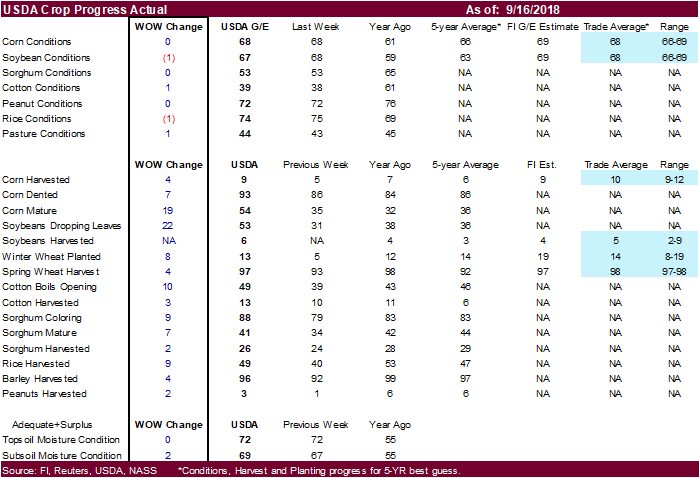 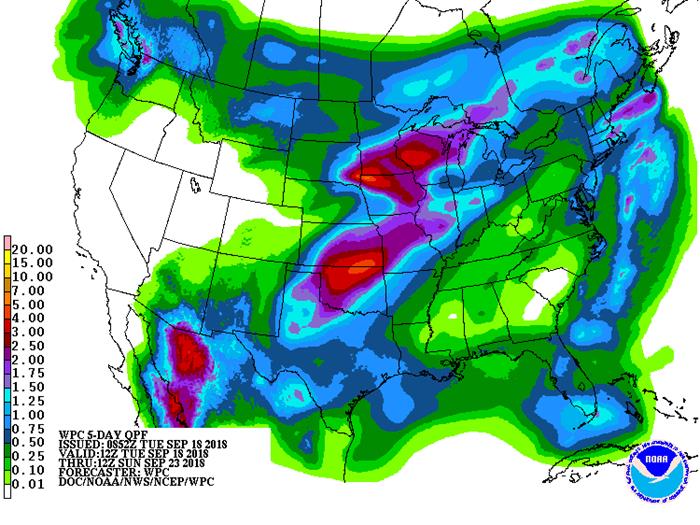 ·         President Trump will impose new tariffs on about $200 billion in Chinese products and threatened to add more. 10% was set to take affect September 24 and will rise to 25% at the end of the year

·         Chinese Filed Complaint To WTO On Latest US Tariff Measures

·         USDA reported US corn harvesting progress at 9 percent, one point below a Reuters trade guess, up 4 points from the previous week and compares to 7 last year and 6 average.

·         USDA reported US corn crop conditions at 68 percent, unchanged from the previous week (trade was looking for unchanged) and compares to 61 last year and 66 average.

·         The soybean complex is lower with November soybeans at a contract low. US harvesting pressure and China/US trade concerns are the largest fundamentals noted. Soybean meal broke below $300/short ton. This might attract end user buying. Higher crude oil is limiting losses in soybean oil.

·         China is now sending a low-level aid to Washington. There is talk China may increase the US soybean import tariff. A move like this would stop ideas of China importing US soybeans anytime soon.

·         Rotterdam oils were mixed and SA soybean meal when imported into Rotterdam mixed.

·         Brazil’s Parana AgMin, Deral, estimated soybean plantings at 9 percent, above only 1 percent a year ago.  Weather in Brazil and Argentina is favorable for early fieldwork progress.

·         NOPA reported the August crush at 158.9 million bushels, 5.0 bushels below a Reuters trade guess, down 8 million from the previous month and up 16.5 million from the previous year. US September 1 NOPA soybean oil stocks came in at 1.623 billion pounds, 139 million below an average trade guess, 140 million below the end of August and 206 million above August 2017. US soybean meal exports reported by NOPA were very good at 762,000 short tons, 24,000 above the previous month and 335,000 above the previous period year ago. August meal exports were a record for the month.

·         USDA reported US soybean harvesting progress at 6 percent, 1 point above a Reuters trade guess, and compares to 4 last year and 3 average.

·         USDA reported US soybean crop conditions at 67 percent, down one point from the previous week (trade was looking for unchanged) and compares to 59 last year and 63 average.

·         Our weighted crop index for US soybean crop conditions is running at 82.2 percent (82.2/100), above 80.3 a year ago and 81.4 average. Using this index against a 15-year trend yield history against FI crop conditions as of or near October 1, the US yield could end up near 53.1 bushels per acres (3.4/bu above the 49.7 fifteen-year trend yield), 0.3 bushel above USDA and compares to 49.1 bushels a year ago.  Using 88.733 million acre soybean harvested area, production could end up near 4.712 billion bushels, if ratings remain unchanged from now until October 1. Our production estimate is 19 bushels above USDA.

·         US wheat is higher on Australian production woes and speculation export demand could increase out of the Northern Hemisphere.

·         There are rumors Russia may limit wheat exports, which are unfounded. Another rumor is that Russia asked one or some of their customers (major importing countries) to lower wheat import tariffs. Details were lacking.

·         USDA reported US winter wheat planting at 13 percent, up 8 points from the previous week, 6 points below a trade average and compares to 12 last year and 14 average.

·         USDA reported US spring wheat harvesting progress at 97 percent, one point below a Reuters trade guess, up 4 from the previous week and compares to 98 last year and 92 average.