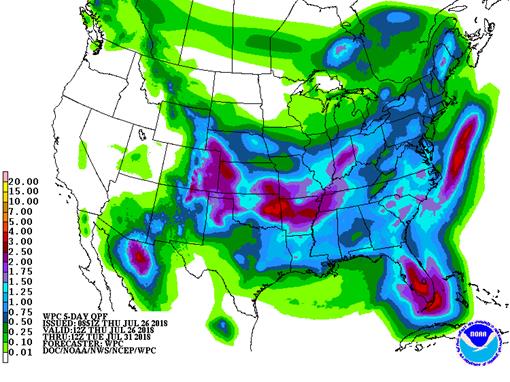 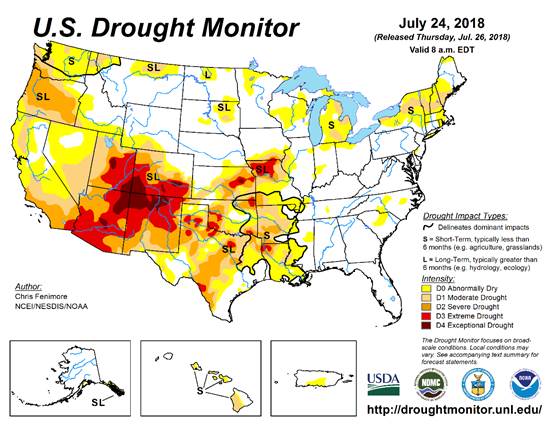 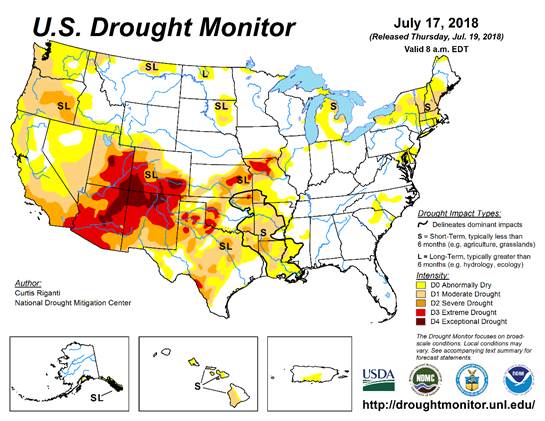 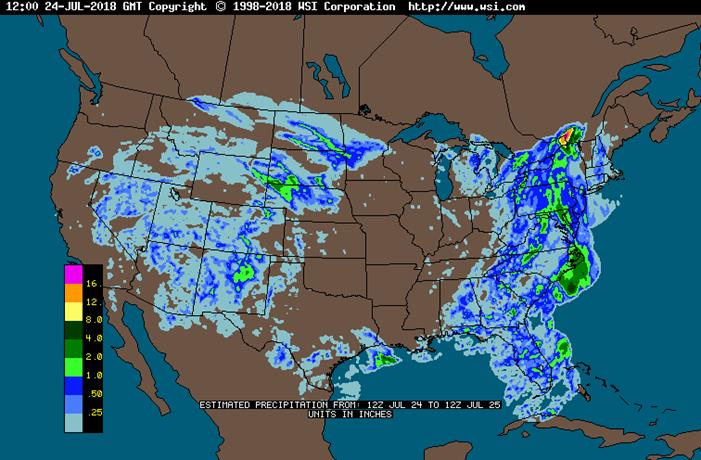 ·         Tropical Storm Jongdari is expected to reach Honshu, Japan late in the weekend and could bring some relief to the recent hot, dry, weather, but might also bring some damaging wind and flooding rain to the region

·         Eastern Europe and the western CIS will see frequent rain maintaining concern over unharvested small grain quality for a few more days, but much less rain is expected in western Russia by the weekend and improving conditions will occur next week; Belarus, western Ukraine and eastern Poland will stay wet into next week

·         India’s Monsoon will take a short-term break from mid-week this week into the end of next week, but sufficient moisture is present in most of the nation to support crops favorably as long as rain resumes in August

·         Temporary improvement is possible for some crops in the state

·         Southern U.S. Plains livestock and crops are seeing some relief from excessive heat and some showers are expected

·         Key Texas crop areas will stay dry this week, but some rain will fall in West Texas Thursday into Friday and again Sunday into Monday 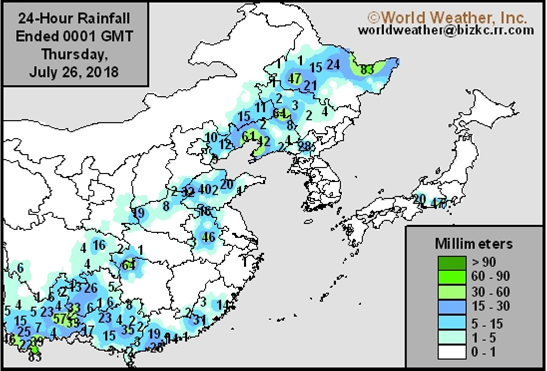 From the US CFTC

July 25, 2018: Effective with last week’s Commitments of Traders report, Commission staff had reclassified some traders, removing some from the index classification while adding others. These positions were fairly small but in the aggregate they were noticeable. Only the Supplemental Commodity Index report was affected by these revisions. Commission staff periodically evaluates these classifications and will change a classification in light of new or additional information.

·         US stocks are mixed, USD higher, WTI crude nearly unchanged, and gold lower, at the time this was written.

·         USDA US corn export sales were within expectations.

·         China could see net drying and warm temperatures that may stress the crop.

·         The soybean complex is higher on an apparent US/EU trade deal to allow an easier way for the EU to import US soybeans. The EU is already buying North American soybeans. President Trump and EU’s President Jean-Claude Juncker were in talks to suspend new tariffs. https://www.bloomberg.com/news/articles/2018-07-25/why-the-eu-was-already-likely-to-import-more-u-s-soybeans

·         USDA US soybean export sales exceeded expectations. Shipments of the products were good. There were 406,200 tons of new-crop soybeans reported from the 963,800 tons total.

·         The market this week already saw a surge in recent US/Canadian soybean exports to the EU. If they take it to the next level by buying a large amount of soybean meal, then you might be able to add to a bullish case.

·         Brazil exported 1.7 million tons of soybean last week, down from 2 million previous week. One analyst noted commitments rose to nearly 62 million tons. The lineup for Brazil is still hefty for this time of year.

·         Indonesia palm oil stocks could decline in June according to a survey to 4.7 million tons. Stocks were at a two-year high at the end of May at 4.76 million tons.

·         Indonesia will leave its CPO export tax unchanged for August at zero.

·         The National Development and Reform Commission (NDRC) is meeting to discuss how to change feed proportions for end users.

·         China soybean meal is up for the 6th consecutive day before ending slightly lower.

·         September China cash crush margins were last running at 50 cents/bu, up from 45 previous session, and compares to 46 cents last week and 71 cents a year ago.

·         US wheat futures are higher on follow through buying amid global weather problems propping up cash prices in the EU and Black Sea.

·         USDA US all-wheat export sales improved from the previous week.

·         There are rumors of a Russian wheat embargo but with Russia production and stocks at high levels, we think this would be premature. CRM AgriCommodities reported it and the news was picked up by Bloomberg. Russian wheat exports are off to a great start but high stocks carried into the 2018-19 season should allow Russia to comfortably export wheat through first half of the crop-year, in our opinion.

·         Bulgaria harvested 4.1 million tons of wheat as of July 19, 8 percent below a year ago. About three-fourths of the crop had been harvested. 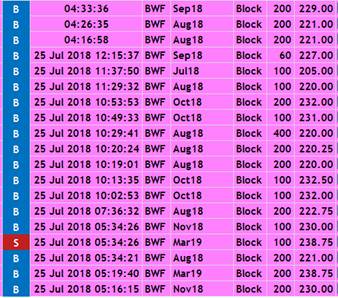 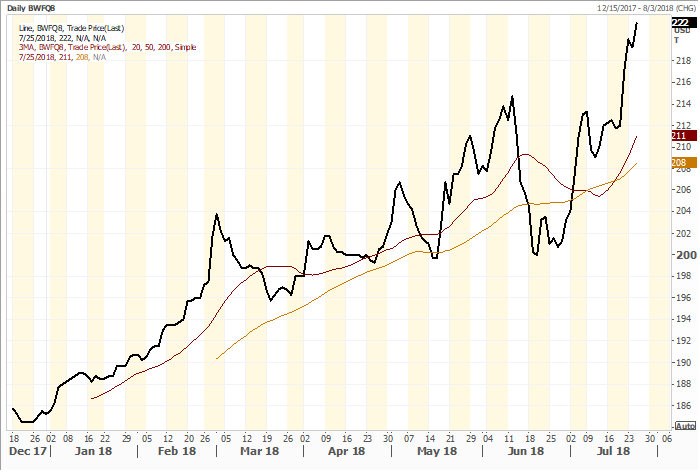