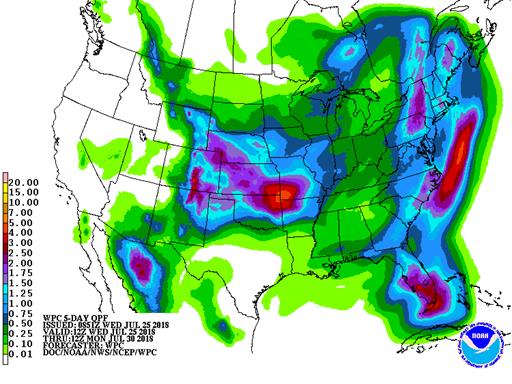 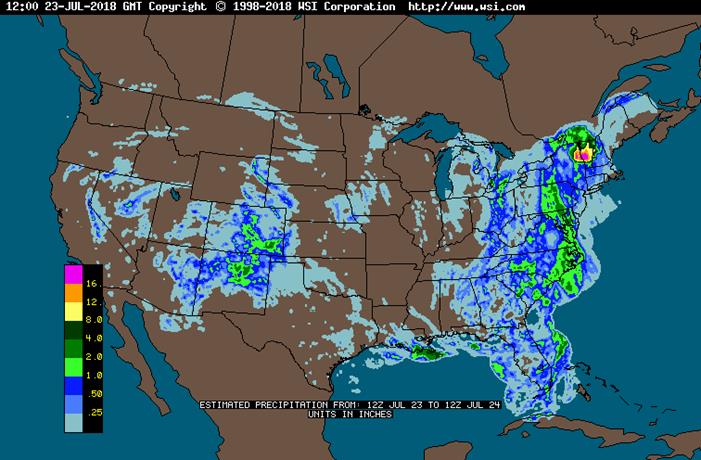 ·         Western Luzon Island, Philippines rainfall eased up Monday after a couple of weeks of frequent heavy to torrential rainfall

·         India’s Monsoon will take a short-term break from mid-week this week into the end of next week, but sufficient moisture is present in most of the nation to support crops favorably as long as rain resumes in August

·         Northern Europe dryness is not likely to change much the remainder of this week, but some showers will begin to increase late in the week through early next week with Germany and Scandinavia seeing some relief

·         Eastern Europe and the western CIS will see frequent rain maintaining concern over unharvested small grain quality for a few more days, but much less rain is expected by the weekend and improving conditions will occur next week

·         U.S. Midwest weather will be mild to cool, but net drying is still expected in the central and southwestern Corn Belt through the end of this week. Rain this weekend is expected to bring some needed relief to dryness in the southwest

·         Southern U.S. Plains livestock and crops will get relief from excessive heat the remainder of this week

·         Key Texas crop areas will stay dry this week, but some rain will fall in West Texas Thursday into Friday and again Sunday into Monday

·         SW Canada Prairies, northwestern U.S. Plains and U.S. Pacific Northwest will stay drier and warmer biased through the next week. 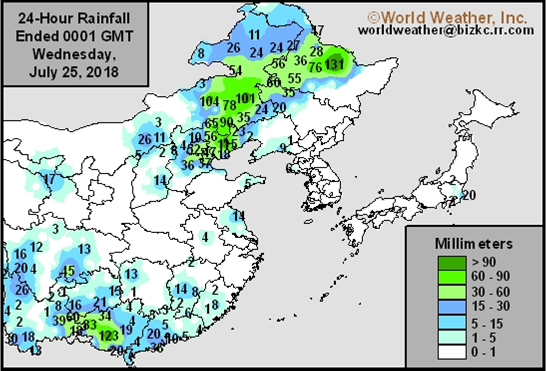 ·         Private analysts in Argentina said today that the Argentina 2018/19 corn harvest may reach 44 MLN tons on favorable prices and weather.

·         Brazil is sending a delegation to Mexico to look into importing agriculture commodities, such as corn.

·         Flooding across China prompted the government to notify local agencies to ensure current supplies are protected and report prices on a daily basis.

·         The soybean complex is mixed with the product near unchanged on lack of direction. Good demand for US domestic end users and surge in exports to countries other than China continue to underpin prices, even as the US crop is expected to be reported larger by USDA in August from their early summer estimate.

·         Argentina economic woes are renewing. The economy shrank 5.8 percent in May from a year ago, second consecutive monthly decline. This was largest decline since July 2009. Farming activity shrank 35 percent year-over-year.

·         Delays to unload soybeans in China are holding up the unloading of two US soybean cargos near Dalian.

·         September China cash crush margins were last running at 45 cents/bu, up from 41 previous session, and compares to 46 cents last week and 71 cents a year ago.

·         Rotterdam vegetable oils were unchanged to higher and SA soybean meal unchanged to lower, as of early morning CT time.

·         Indonesia is close to finalizing a plan to increase domestic biodiesel use.

·         The fact that the US will provide producer aid of $12 billion paid through direct assistance, a food purchase and distribution program, and a trade promotion program, was seen as supportive yesterday for soybeans. As it should have.  Details of the programs will be released over the next two weeks.

·         The Chinese are not happy with the announcement, calling it “vicious”. 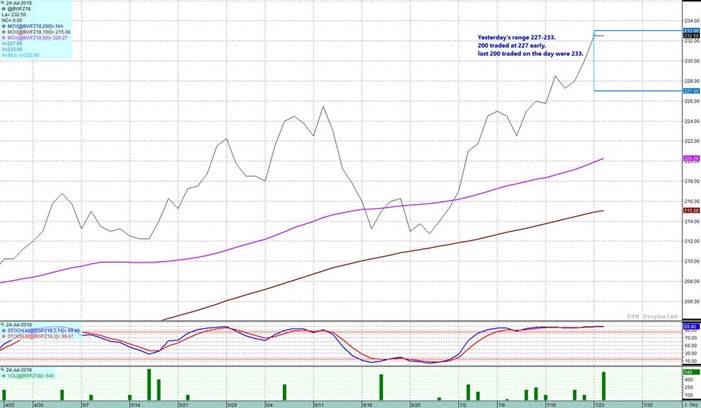