·         This week’s crop progress has no implications on our winter and spring wheat crop production forecasts for the upcoming July USDA S&D supply side estimates.

·         37 percent of the US corn crop reached the silking stage as of Sunday. With one-third of it pollinating, US corn is in good shape after milder temperatures over the weekend slowed evaporation rates. Dry weather this week appears to be less threatening for the US crop. Note the US Midwest will see 70-75 percent coverage Wed into Sat and 80 percent Sat into Tue of next week. More rain is expected July 17-20th. US G/E corn conditions decline one point, as expected. 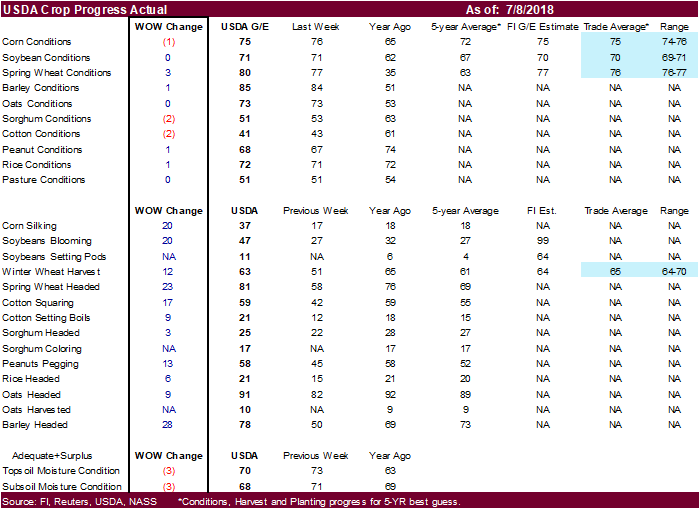 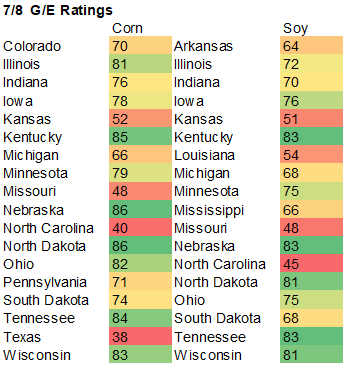 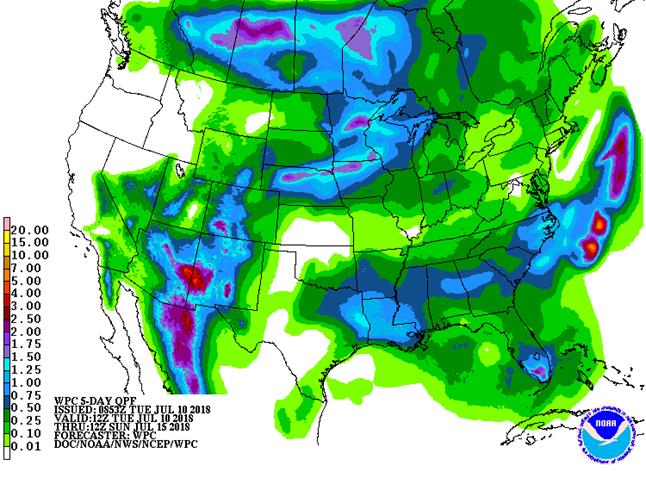 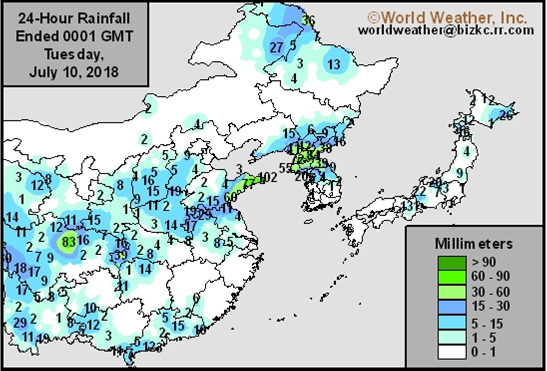 ·         Funds and money managers were good sellers of corn for the week ending July 3. They sold beans, meal and KC wheat, and bought Chicago wheat.  Weekly changes were much smaller than the previous two weeks.

·         We estimate the traditional funds now hold a net short position in soybeans.

·         US stocks are higher, USD is higher, WTI crude higher, and gold lower, at the time this was written

·         37 percent of the US corn crop reached the silking stage as of Sunday. With one-third of it pollinating, US corn is in good shape after milder temperatures over the weekend slowed evaporation rates. Dry weather this week appears to be less threatening for the US crop. Note the US Midwest will see 70-75 percent coverage Wed into Sat and 80 percent Sat into Tue of next week. More rain is expected July 17-20th. US G/E corn conditions decline one point, as expected.

·         The US soybean complex was higher this morning but gains limited as the Dalian products fell hard overnight amid a CNGOIC report on low use of soybean meal use, and US weather remains non-threatening. Above normal temperatures for the US this week are keeping some bulls in the market.

·         Soybeans could trade two-sided if meal price come off their overnight close. Soybean oil is mixed but losses, if any, can be limited from higher crude oil.

·         The CNGOIC sees ample China soybean supplies through August as animal feed mills are reducing the soybean meal use due to low domestic pork prices.

·         September China cash crush margins were last running at 64 cents, up a penny from the previous session, and compares to 56 cents last week and 84 a year ago.

·         Rotterdam vegetable oils were lower and SA soybean meal when delivered into Rotterdam were 4-10 euros lower as of early morning CT time.

·         The US soybean crop is well advanced and US weather is non-threatening.

·         Soybean and Corn Advisor left his US soybean yield estimate unchanged at 51.0 bushels per acre.

·         US wheat futures are on the defensive from lower Paris wheat futures and US spring wheat conditions unexpectedly improving from the previous week.