·         Biggest surprise in USDA crop conditions this week was in spring wheat ratings were the combined good/excellent categories jumped 8 points to 78 percent.  Trade was looking for unchanged. Last year SW was 41 and 5-year is 65. Keep in mind spring wheat emerged increased 3 points to 97 percent, so it appears recent good crop weather really had a positive impact on the crop.

·         Soybean conditions were down one. Trade was looking for unchanged. Despite the decline this week, we decided to reevaluate our yield and determined we are still low relative to current conditions. We took the FI soybean yield up 0.5 bu/ac to 49.6. USDA is at 48.5. That added 100 million bushels to our forecast from the previous week. Note we are now looking for USDA to report the June soybean planted area 225 million acres above USDA March. 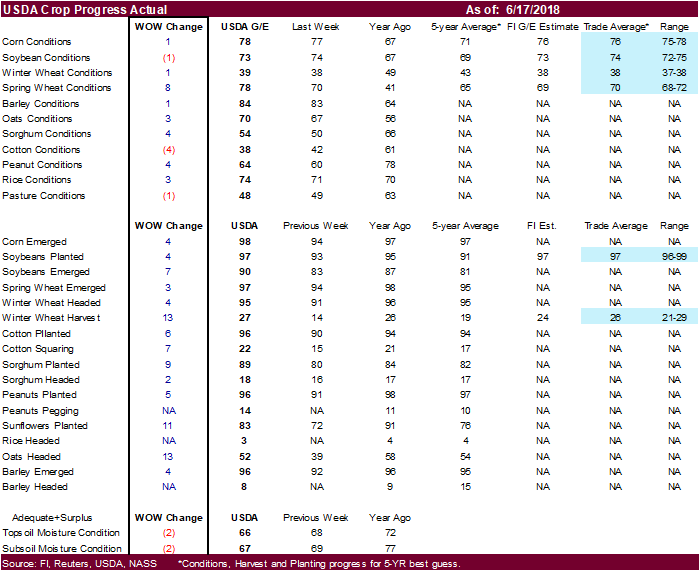 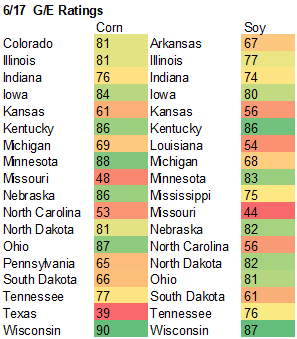 ·         The US Midwest weather outlook appears to be wetter than that of last week. Good coverage is expected to fall across the Midwest through June 28. The Delta and southeastern states will also receive good rain through late June.  What will bring the rain is two upper level low pressure systems moving across the US. 1.00-3.00” will fall, locally more from Nebraska and South Dakota to Ohio. NE and IA should be wettest.

·         In late June through early July, a higher-pressure ridge will return across the middle of the United States, resulting in drier and warmer conditions.

·         The Canada’s Prairies will dry down this week with above normal temperatures.

bands; wettest in and

around east Neb. to

bands in central and 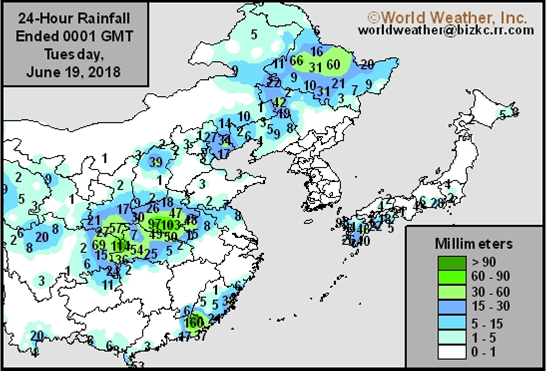 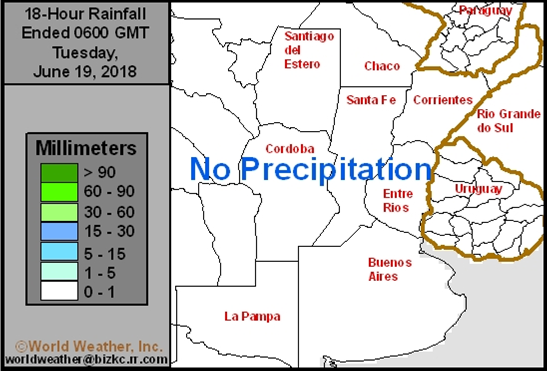 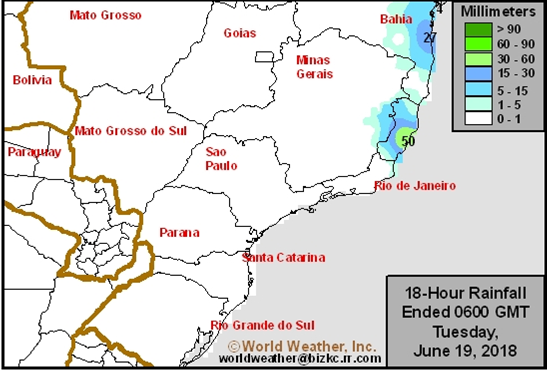 ·         Soybeans are on the defensive again amid escalating China/US trade war fears after president Trump threatened to add 10% tariff on $200 billion on top of the 50 billion already announced. Details on the products included in the tariffs for both counties are still pending, but the second batch is expected to include finished goods/retail products. China said they would “forcefully” retaliate. US corn $14 billion of soybeans to China last year.

·         Soybeans were more than 45 cents lower within the first 30 minutes of day trading (more than double than losses at the end of the overnight session), soybean meal off more than $7.00 and soybean oil down a whopping 133 points.

·         China soybean meal cash prices (average) are running at a 4-week high. China cash crush margins were last running at 84 cents, up 48 cents from the previous session, and compares to 36 cents last week and 1 cents higher a year ago.

·         Rotterdam vegetable oils were 2-10 euros lower and SA soybean meal when delivered into Rotterdam were 5-9 euros lower, as of early morning CT time.

·         Brazil is expected to ship more than expected soybeans to China, with US losing additional market share, at least during the August through early November period, and then again late January 2019 through June 2019 period, if China and US drag on trade disputes.

·         Brazil soybean commitments are running at 53 million tons, up 6 million from a year ago. Brazil shipped 2.3 million tons of soybeans last week, up from 1.95 million tons previous week. Rising Brazil trucker freight rates are apparently not heavily affecting delivery of soybeans to ports, or at least yet.

·         Question we are getting these days is how long can Brazil keep up with heavy soybean shipments before tapping out for the 2018-19 local crop year. We think it could stretch into Q4 2018, but amounts will taper off after August. Supplies are thin for export for Argentina, Paraguay and Uruguay, so Brazil is one of the only countries, outside the US, for China to source soybeans.

·         At this point we don’t think China will import a large amount of soybeans meal. A small boat or two could make its way to China, but that’s about it.

·         A rise in US spring wheat ratings by 8 points, favorable US weather, and China/US trade disputes along with a higher USD and lower lead by the outside commodity markets are keeping US wheat futures prices at multi-week lows for Chicago, multi-month lows for KC, and more than a one-year low for Minneapolis.

·         Egypt bought 3.4 million tons of local wheat so far during the local marketing year campaign. Reserves are at 4.4 months, not including the recent Romanian import tender.

·         Dry weather will dominate eastern Australia over the next week.