US government is back open

·         The January USDA monthly S&D and monthly Crop Production reports will be cancelled. Expect US to release their annual and stocks on February 8.

·         The US government will reopen for three weeks.  Expect a flurry of USDA reports. We are crossing our fingers that USDA will release each weekly report at a day at a time, same as October 2014 when they reopened.

·         What is the trade missing?  Most major USDA and other agency reports (CFTC for example).  See our stripped-down list at the end of the comment. Remember EIA data and export inspections have been released.

·         The largest sticker shock, in our opinion, will be the release of a month’s worth of USDA FAS 24-hour announcements.

·         The US will see a record-breaking cold blast this week. In Chicago, the record daily “high” could be taken out on Wednesday.  Cold temperature for the central upper Midwest will last through Friday. It had already fallen to minus 44 degrees Fahrenheit (minus 42 Celsius) in International Falls, Minnesota, on Sunday.

·         Winterkill threat will be greatest across Nebraska and northern Kansas.

·         Madden Julian Oscillation (MJO) suggest warmer temperatures for the US next week.

·         Brazil’s MGDS saw limited rainfall over the weekend but rain today for MGDS, and neighboring MG, could see up to 2.00”. Other areas received as expected rainfall. Rain will increase across southern Brazil during the weekend and by early next week. Dryness remains significant in many Mato Grosso do Sul, Paraguay, eastern Bolivia locations and from central Minas Gerais through Bahia. There was a weather group out of FL over the weekend mentioning central and northern Brazil received less than half of normal rain levels in last 60 days.

·         Argentina will see additional rain Wed-Fri of this week with local totals up to 7” from Uruguay through Entre Rios and central and southern Santa Fe to central and northern Cordoba and southern Santiago del Estero.  Damage from flooding in Corrientes has been done.

·         Excessive heat prevailed in southeastern Australia over the weekend.

·         India saw welcome rain for the northern wheat production areas over the weekend.

·         South Africa will experience more frequent rainfall over the next two weeks than last week.

·         Europe weather will continue very active with frequent rain and some snow occurring over the next two weeks. 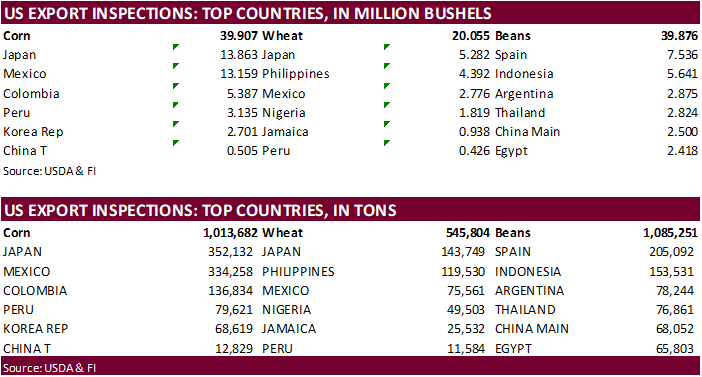 Bloomberg Ag Calendar (will change now that US gov is back open……..)

No changes in CBOT ag registrations

·         Traders will be watching for news on US/China trade talks this week, as well as the flurry of USDA reports.

·         South Korea reported an outbreak of foot-and-mouth disease at a dairy farm in Anseong city.

·         On Friday Reuters reported prompt month US Gulf corn basis hit its highest level since August. FOB corn offers for late January loadings were up 2 cents at about 62 cents over futures.

·         The US soybean complex is mixed with meal and soybeans lower and soybean oil higher. SBO is higher in large part to Malaysian palm advancing on Monday on strength in related vegetable oil markets, including China vegetable oils. Note WTI and Brent crude oil are trading lower.

·         China officials meet with US officials this week in DC. With the US government back open we should learn this week how many soybeans were sold to China during late December through January 28.

·         Ongoing weather problems in Brazil and Argentina continue to underpin prices.  Don’t discount a tow-sided trade in soybeans and meal.

·         Rotterdam oils were 5-7 euros higher from this time last session. Rotterdam meal when imported from SA were mostly higher.

·         Declining South Korea rice consumption per capita has pulled the annual price per capita to a record low in 2018.