Happy Boxing Day!   U.S. President Donald Trump said he and Chinese President Xi Jinping will have a signing ceremony for phase one soon. It could be done by the end of the month.

The US will see a large storm with big snow accumulations from parts of Nebraska to the eastern Dakotas and parts of Minnesota. 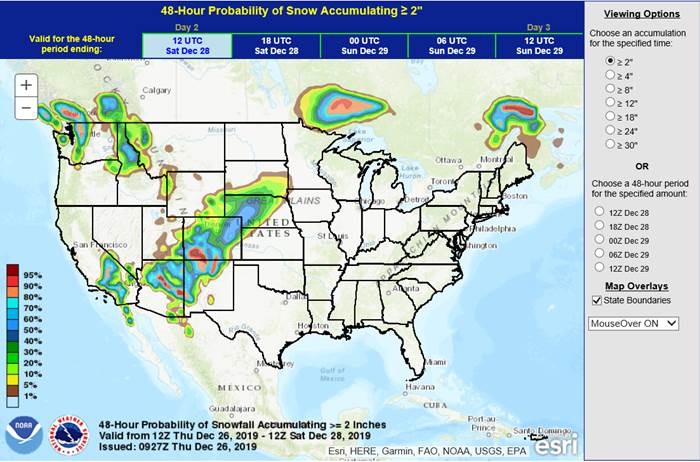 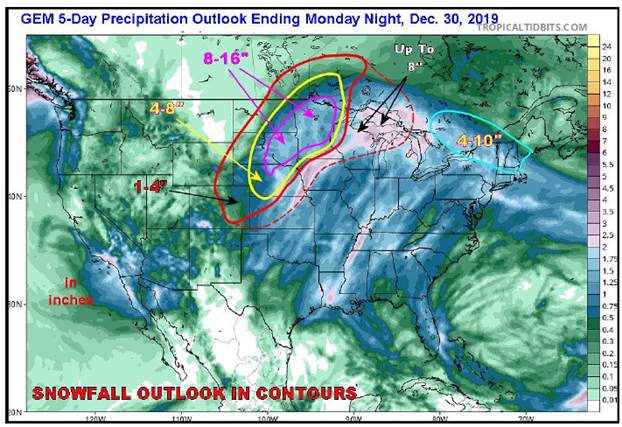 South Africa rainfall will be erratic over the next ten days leaving some areas a little too dry while some beneficial crop and field conditions evolve in other areas.

Eastern Australia’s summer coarse grain and oilseed crops have been stressed in recent heat and dryness, but irrigated areas remain in the best shape. Rain Tuesday into Wednesday was likely too close to the coast to benefit very many crops, but some eastern sorghum might benefit from a little rain this workweek. Temperatures will not be as oppressively hot over the next ten days in eastern crop areas.

Winter rapeseed conditions have not changed much in Europe central Asia of China, but some rain in each of these areas will either improve crop conditions later this week or in the spring when seasonal warming returns.

Late season harvest progress in the U.S. will not likely advance very much after the weekend because of the latest winter storm producing snow in the northwest and abundant rain elsewhere.

Winter wheat conditions in the west-central and southwestern U.S. Plains may improve later this week if the weekend storm occurs as advertised. The region needs moisture for improved crop establishment in the spring.

Additional rain in the Midwest this weekend and early next week will maintain wet field conditions in soft red wheat production areas. Crop conditions will not change much, although rising soil temperatures may reduce winter hardiness as this week moves along especially in the south.

Argentina wheat harvesting will advance relatively well for a little while longer as rainfall continues erratic and light. However, a boost in precipitation coming next week will set back late season harvesting and could raise some grain quality issues in a few areas. Much of this year’s crop has already been harvested.

Turkey will receive some additional needed rain over the next several days improving wheat establishment potential. Most other areas in the Middle East have seen a good mix of weather this season and will get additional moisture next week. Syria and Turkey need rain most.

Winter crops in Eastern Europe and the western CIS will not be vulnerable to any winterkill in the next ten days as temperatures remain near to above average. Snow cover remains minimal

Recent rain in Spain and Portugal has improved winter crop prospects for early spring crop development in February. Additional rain would be welcome. 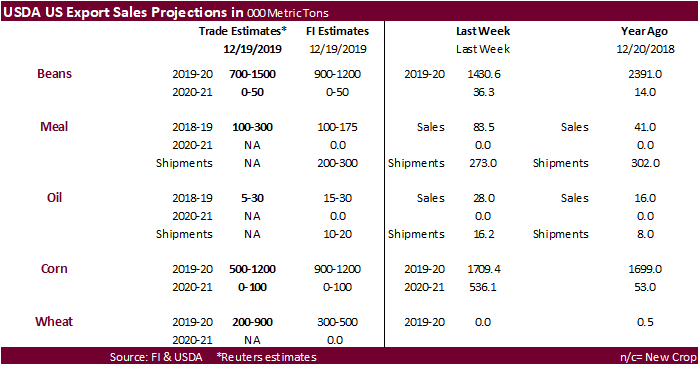 ·         There was not much news in the corn market today, ending higher. This and soybean/corn and wheat/corn spreading pathed the way for a two-sided trade.

·         A Chinese government report calls for China’s northeastern Corn Belt to get hit by another armyworm infestation in 2020.  National Agriculture Technology Extension Service Center (NATESC) estimated 16.88 million mu or 1.13 million hectares were affected in 2019, across 26 provinces and regions, and was expected to spread out further in 2020.

·         Soybean oil led soybeans higher.  The March soybean oil contract hit a contract high of 34.86 today.  Although we are bullish vegetable oils in general, we think its temporarily overbought.  There are two factors for the more than 1.50 percent jump in nearby SBO, 1) the sharp increase in Malaysian palm oil prices and 2) Egypt’s GASC soybean oil import tender results.

·         Malaysian palm was up sharply, and futures are near a 3-year high and above 3000 MYR (last mid-Feb. 2017).  According to Reuters, the Malaysian Palm Oil Association and Southern Peninsular Palm Oil Millers Association both look for a big fall in palm production in December, at 16% and 27% respectively, from November. 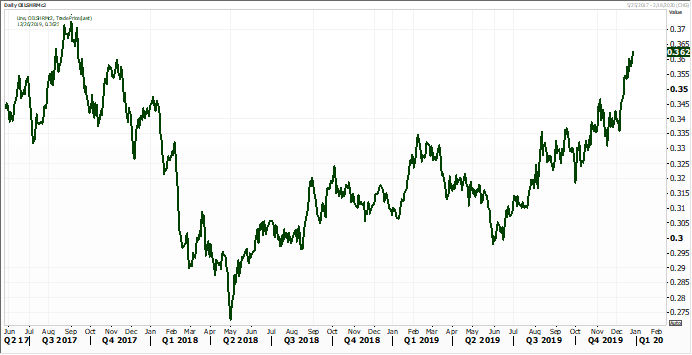 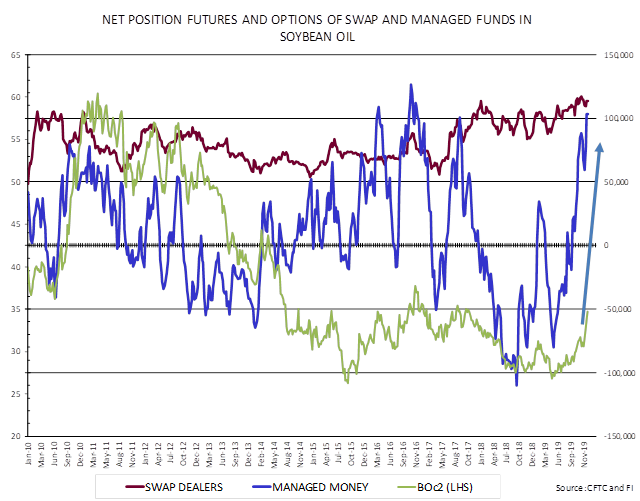 ·         Argentina saw light rain bias southern growing regions over the past couple days.  Brazil weather is favorable, and some analysts are raising production estimates to high as 126MMT (124.4MMT is FI). US shipments of soybeans were more than 2.5MMT to China in November.  However, other weather reports warned of net drying to dominate Argentina’s northern growing region and parts of Brazil.  Traders should monitor South American weather forecasts over the next week.

·         China crush margins are deteriorating. Chinese soybean cash crush margins fell to 130 cents a bushel on Wednesday.  On Thursday China cash crush was last 124 cents per bushel (142 on Wed.), compared to 160 on Friday and negative 21 cents year ago. 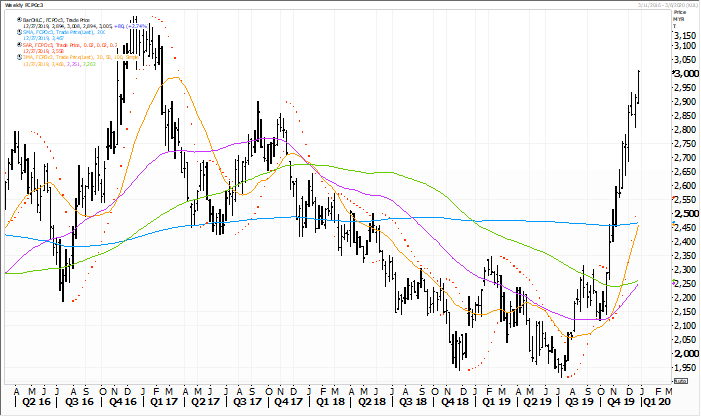 ·         US wheat futures rallied on a pickup in global import tender announcements and SovEcon slightly reducing their estimate for the Russian 2019-20 wheat exports by 0.2 million tons to 33.1 million tons. SovEcon also indicated they may lower their wheat export projection again in January. 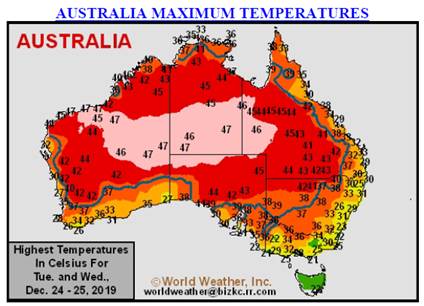 Details of the tender are as follows: