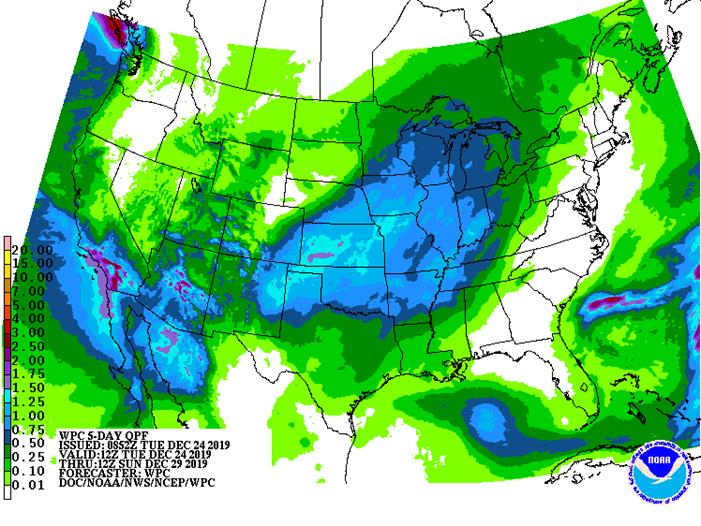 Brazil and Argentina weather will be favorable over the next two weeks, although the ridge of high pressure in southern Brazil will have to be monitored this week to make sure it is only going to prevail this workweek. If it stays too long there could be a negative impact on some crops.

Argentina should see timely rainfall in most of the nation over the next two weeks, although there will still be areas of lighter than desired rainfall. Temperatures will be warm, but not excessively hot. Crops are still stressed in the southwest, despite some recent rain. More precipitation is needed in all central and southern crop areas.

South Africa rainfall will be erratic over the next ten days leaving some areas a little too dry while some beneficial crop and field conditions evolve in other areas.

Eastern Australia’s summer coarse grain and oilseed crops have been stressed in recent heat and dryness, but irrigated areas remain in the best shape. Rain later this week will likely be too close to the coast to benefit very many crops, but some eastern sorghum might benefit from a little rain this workweek. Temperatures will not be as oppressively hot this week in eastern crop areas.

Winter rapeseed conditions have not changed much in Europe central Asia of China, but some rain in each of these areas will either improve crop conditions later this week or in the spring when seasonal warming returns.

Late season harvest progress in the U.S. will only be able to advance slowly in the next couple of weeks. Warm temperatures and limited precipitation through mid-week this week will help some areas. Snow melt and muddy field conditions will not allow much progress, however.

MARKET WEATHER MENTALITY FOR WHEAT AND OTHER SMALL GRAINS:

Winter wheat conditions in the west-central and southwestern U.S. Plains may improve later this week if the southwestern U.S. storm comes into the Plains as advertised today. The region needs moisture for improved crop establishment in the spring.

Additional rain in the Midwest later this week will maintain wet field conditions in soft red wheat production areas. Crop conditions will not change much, although rising soil temperatures may reduce winter hardiness as this week moves along especially in the south.

Argentina wheat harvesting will advance relatively well for a while as rainfall continues erratic and light. Last week’s rain briefly disrupted harvest progress, but might have been good for the most immature crops

Turkey and Syria will receive some needed rain this week improving their establishment potential. Most other areas in the Middle East have seen a good mix of weather this season.

Winter crops in Eastern Europe and the western CIS will not be vulnerable to any winterkill this week as temperatures remain well above average. Snow cover remains minimal

Recent rain in Spain and Portugal has improved winter crop prospects for early spring crop development in February. Additional rain would be welcome. 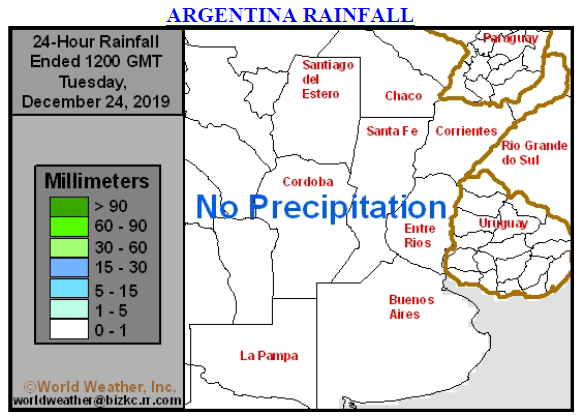 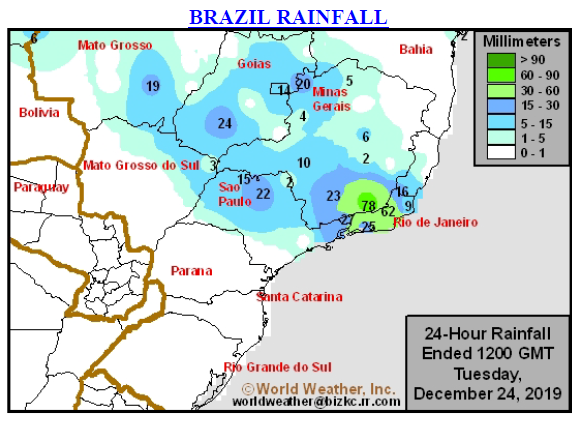 ·         Despite the USDA reporting a large US hog and pig population as of December 1, CBOT corn futures traded lower.  The reversal in soybeans did little to support corn.

·         AKIpress News Agency noted 1,000 tons of Kazakh corns was exported via train in containers to China, first shipment by train in history, a move that represents logistical improvement and opens the door for agriculture trade between both countries.  China’s appetite for corn has increased in recent years and they no long rely solely on SA, Ukraine and US corn.

·         The soon expiring January CBOT soybean contract traded at a fresh 6-week high after opening lower. March soybean failed to test its 6-week high.   Follow through support from slow US producer selling was noted.  Soybean meal and oil were turned higher as well.  Egypt is in for vegetable oils.  CBOT March soybean oil is back near its contract high.

·         The Jan/Mar spread was last 8.25, March premium.  There were no changes in soybean registrations, but the 110 soybeans came out of Chicago yesterday now have been related to the 22 barges making their way to the Gulf as we were told Chicago is the cheapest origin.  Looking at soybean basis at crush plants, they are up at several locations from the previous week.  This tells us the producers are getting friendly soybeans, perhaps on the US/China trade deal announcement, and we don’t see them selling until the beginning of 2020 anyway.  US producers also have more incentive to sell the July contract with current cost of carry.  We think the Jan/Mar soybean spread may narrow to 7.00-7.25 cents.

·         Argentina officials are in talks with producers that reside far from the ports and crushing plants to work on a plan to potentially lower export taxes.  Soybean export tax increased to 33% from about 25%.

·         Traders will be monitoring the high-pressure ridge over Brazil this week as it could yield beneficial rainfall for Argentina, if the ridge drifts into Argentina during the weekend and next week. 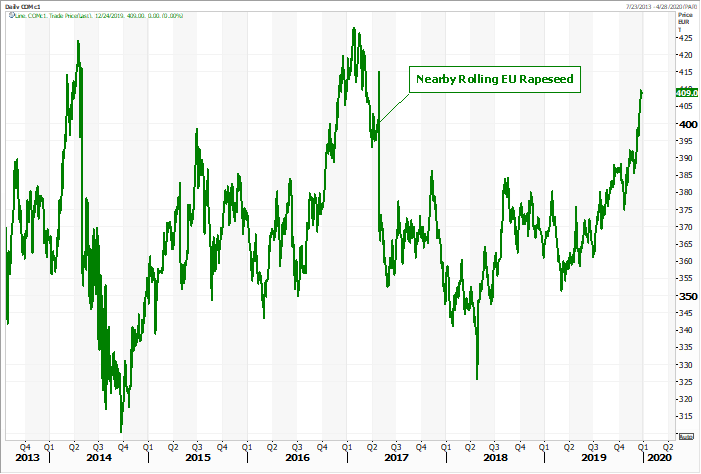 ·         After a two-sided trade on Monday, US wheat futures appreciated on technical buying and a smaller than expected Russian wheat crop.  Morocco will lower its import duty on soft wheat early January.

·         Reuters: Russian state-controlled grain trader United Grain Company (UGC) has drafted a new strategy aimed at increasing its own grain purchases and trade to 8 million tons a year by 2024, Russian daily the Kommersant reported on Monday.

·         Russia’s government reported the wheat crop for 2019-20 at 74.3 million tons, below the Deputy Prime Minister’s previous statement of around 75 million tons.

·         A winter storm is expected in the U.S. central and southwestern Plains late this week and into the weekend. Heavy snow is expected from Colorado to Nebraska.

Details of the tender are as follows: