CBOT
closes early on Tuesday and will have a hard open Thursday.

Traders
will be watching the high-pressure ridge building in Brazil that could yield rain across the dry areas of Argentina if it to shift south.

Brazil
and Argentina weather will be favorable over the next two weeks, although the ridge of high pressure in southern Brazil will have to be monitored this week to make sure it is only going to prevail this workweek. If it stays too long there could be a negative
impact on some crops.

Argentina
should see timely rainfall in most of the nation over the next two weeks, although there will still be areas of lighter than desired rainfall. Temperatures will be warm, but not excessively hot. Crops are still stressed in the southwest, despite some recent
rain. More precipitation is needed in all central and southern crop areas.

South
Africa rainfall will be erratic over the next ten days leaving some areas a little too dry while some beneficial crop and field conditions evolve in other areas.

Eastern
Australia’s summer coarse grain and oilseed crops have been stressed in recent heat and dryness, but irrigated areas remain in the best shape. Rain later this week will likely be too close to the coast to benefit very many crops, but some eastern sorghum might
benefit from a little rain this workweek. Temperatures will not be as oppressively hot this week in eastern crop areas.

Winter
rapeseed conditions have not changed much in Europe central Asia of China, but some rain in each of these areas will either improve crop conditions later this week or in the spring when seasonal warming returns.

Late
season harvest progress in the U.S. will only be able to advance slowly in the next couple of weeks. Warm temperatures and limited precipitation through mid-week this week will help some areas. Snow melt and muddy field conditions will not allow much progress,
however.

MARKET
WEATHER MENTALITY FOR WHEAT AND OTHER SMALL GRAINS:

Winter
wheat conditions in the west-central and southwestern U.S. Plains may improve later this week if the southwestern U.S. storm comes into the Plains as advertised today. The region needs moisture for improved crop establishment in the spring.

Additional
rain in the Midwest later this week will maintain wet field conditions in soft red wheat production areas. Crop conditions will not change much, although rising soil temperatures may reduce winter hardiness as this week moves along especially in the south.

Argentina wheat harvesting will advance relatively well for a while as rainfall continues erratic and light. Last week’s rain briefly disrupted harvest progress, but might have been good for the most immature crops

Turkey and Syria will receive some needed rain this week improving their establishment potential. Most other areas in the Middle East have seen a good mix of weather this season.

Winter
crops in Eastern Europe and the western CIS will not be vulnerable to any winterkill this week as temperatures remain well above average. Snow cover remains minimal

Recent
rain in Spain and Portugal has improved winter crop prospects for early spring crop development in February. Additional rain would be welcome. 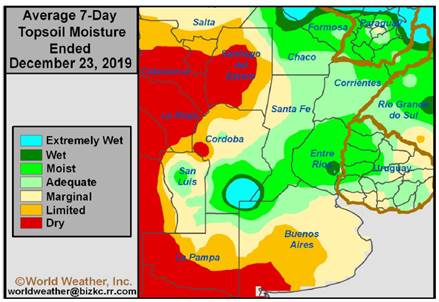 ·
Corn futures traded 0.75-1.75 cents higher after China indicated they will roll back import tariffs on US goods.  Prices eased in the modified session.

·
Funds bought an estimated net 4,000 corn contracts on the session.

·
CBOT March corn during the session traded back above its 100-day MA.

·
Futures volumes were low as the trade enters holiday mode.  CH0 versus volume chart below: 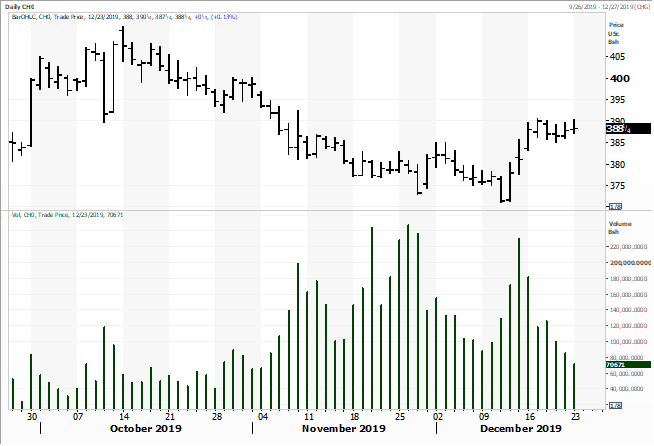 ·
No major surprises were seen this quarter for the USDA hogs and pigs report. All US hogs as of December 1 were 3 percent above a year ago, as expected.  Kept for breeding was 2.1 percent higher, a half percentage
point above an average trade guess, and kept for market 3.1 percent above 2018, as expected.  The pig crop expansion was less than expected. 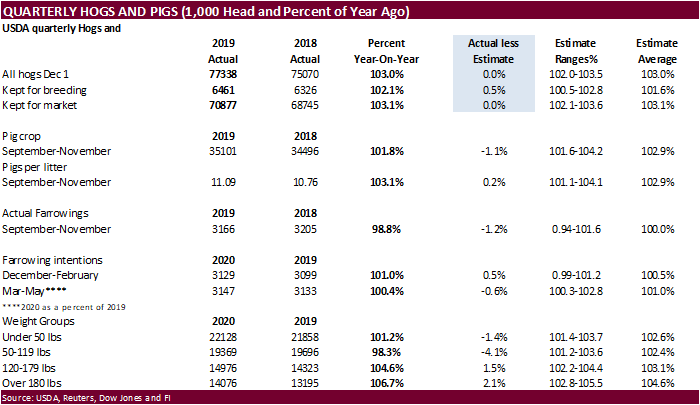 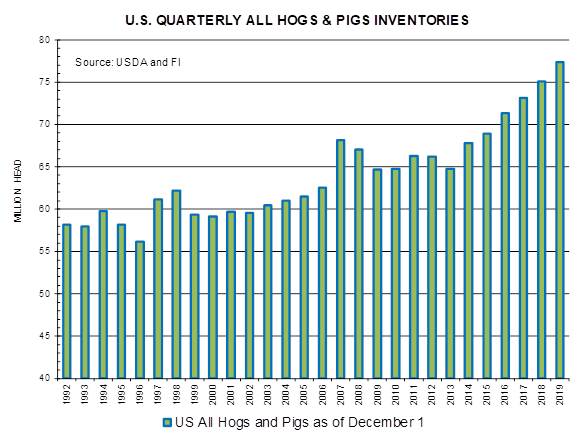 ·
CBOT soybeans
traded to a six-week high on hopes China will buy US soybeans after it was reported China will relax on about 390 billion USD of US import tariffs. USDA reported export sales to China this morning, indicating they are still searching for product to fill February
requirements.  USDA also reported switches from unknown to other countries, so the trade may have read into this as less soybeans committed to China as some count the “unknown” destination as China.  Lighter than expected rains fell across South America over
the weekend.  There were 100 CBOT soybean registrations cancelled out of Chicago. We heard soybeans were moving down the Miss down to the Gulf bit not sure if the registration cancellations were connected to it.

·
Bull spreading in soybeans and meal were an early feature. Soybean oil traded slightly as bulls took a pause.  Palm oil futures were mostly lower, but cash was up about $2.00.  Palm oil prices were up 35 percent
year-to-date earlier this month.   We still like owning soybean oil but a short-term correction could be coming up.  CBOT crush was higher. The crush has traded in a choppy sideways trading range during the soybean bull run.  CBOT meal was up $2.50-3.60/short
ton.

·
There was growing speculation whether or not China could materially buy the amount of agriculture products from the US as stated last week in various reports, but this didn’t seem to affect trading on Monday.

·
Traders will be monitoring the high-pressure ridge over Brazil this week as it could yield beneficial rainfall for Argentina, if the ridge drifts into Argentina during the weekend and next week.

·
Indonesia will be launching B30 mandatory initiative on Jan 1 and Malaysia will be following with B20 in Feb. In late 2018, a 20 percent mandate was enacted.

·
Gapki reported end of October stocks of palm fell 0.5 percent to 3.71 million tons from Sep. and production was 4.52 million tons, down from 4.59 million in September. 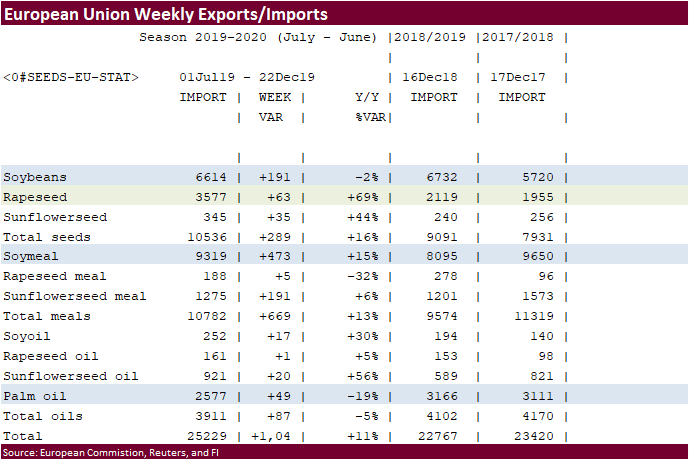 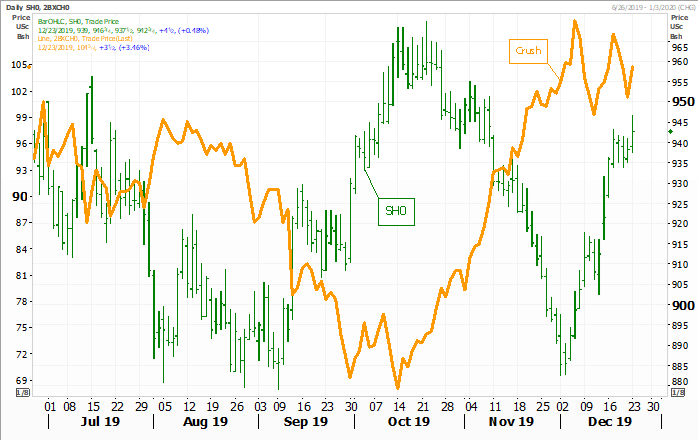 USDA
released (re-release) a long-term analysis of China soybean origin import market share. Nothing the trade didn’t know but the graph below is a good reminder why US soybean stocks were unusually high at the end of September.  With projections for US ending
stocks to decrease over the next 2 to 3 years, we look for soybean prices to appreciate in 2020.
https://www.ers.usda.gov/data-products/chart-gallery/gallery/chart-detail/?chartId=93777 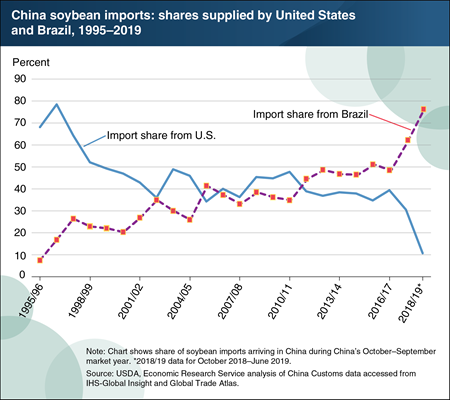 ·
Through 12/23, the nearby month rolling KC-Chicago wheat spread shattered records.  June to date averaged 78 cents, Chicago premium, a record at least from 1980.  See the table at the end of this comment.

·
Funds sold an estimated net 2,000 wheat on the session.

·
Taiwan plans to buy more agriculture goods, likely from the US, as their trade surplus widens.

·
A winter storm is expected in the U.S. central and southwestern Plains late this week and into the weekend.

·
The European Union granted export licenses for 152,000 tons of soft wheat imports, bringing cumulative 2019-20 soft wheat export commitments to 13.402 MMT, up from 8.015 million tons committed at this time
last year, a 38 percent increase.  Imports are down 48 percent from year ago at 2.302 million tons. 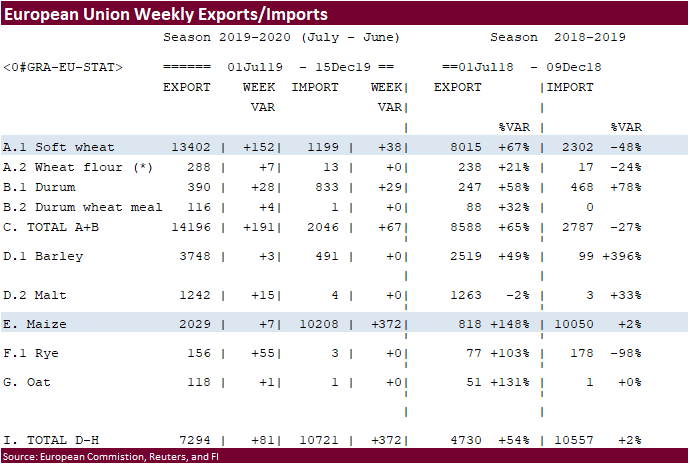 Russian
grain exports for the first six months of the year are slow.

Details
of the tender are as follows: