·         Soybeans rallied from sharply higher soybean meal (bull spreads). The strength in soybean meal was related to ideas Brazil will no longer offer soybean meal for export during the November and December period, resulting in buying turning to the US. In addition, Census reported higher than expected US soybean meal exports for the month of August. September US soybean meal exports are thought to the be equally strong, if not larger than August.  November soybeans traded as high as $8.7025. The contract settled 9.75 cents higher near its intraday high. The most active soybean meal contract, December, traded to nearly a one-month high, ending $7.40/short ton higher. December soybean oil fell 20 points to 29.41. On Wednesday the contract hit its highest level since June 22.

·         The Brazil presidential election is Sunday. https://www.bloomberg.com/graphics/2018-brazil-election/ If no presidential candidate surpasses 50 percent of the vote on Sunday, the top two will compete in a runoff on October 28. Caution to those trading the Brazil currency.

·         AgRural estimated Brazil planted 10 percent of their soybean crop, double than that of last year.

·         Safras & Mercado reported new-crop brazil soybean sales as of October 1 at 27.3 percent, up from 14.1 percent at this time last year, and compares to an average 30.2 percent. Safras is using 121 million tons for 2019 production. Conab is due out soon with their estimate.

·         The Philippines bought 134,000 tons of soybean meal.  US soybean meal export business should remain steady to firm over the next few months as Argentina and Brazil become non-competitive.

·         Census reported August soybean meal/flour and hulls exports at 1.344 million short tons (80k above our working estimate), up from 1.226 million in July and well above 875,484 short tons in August 2017. Impressive figure for this time of year.  Weekly exports as reported by USDA Export Sales during September are roughly 12 percent higher than August. If we were to add a 6 percent increase to the daily adjusted August figure, US soybean meal exports in September could end up near 1.380 million short tons. This would put marketing year exports 600-650 thousand short tons above USDA’s 14.4 million estimate for 2017-18.  Our 2018-19 US soybean meal carryout is 222,000 short tons, below USDA’s current 400,000 estimate. We look for USDA to lower their carryout on October 11. 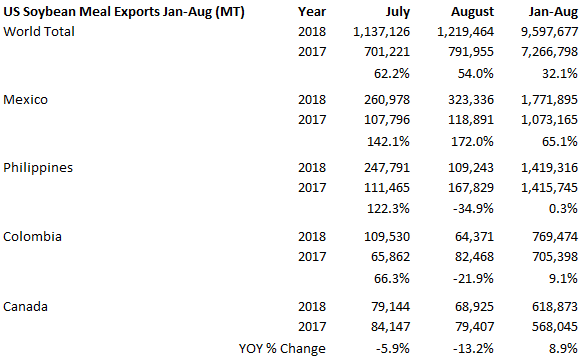 ·         Water levels for the upper Mississippi River are high and stalling some cargo shipments.

·         France planted 5 percent of their soft wheat crop as of October 1, one point below a year ago. If France’s weather does not improve, we look for a smaller winter wheat and rapeseed planted area from 2017-18.