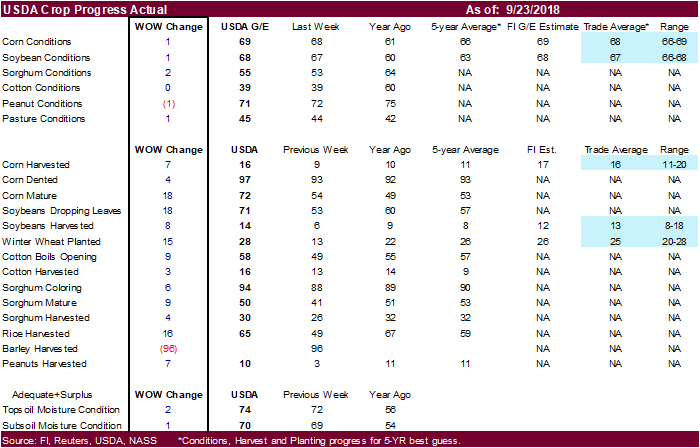 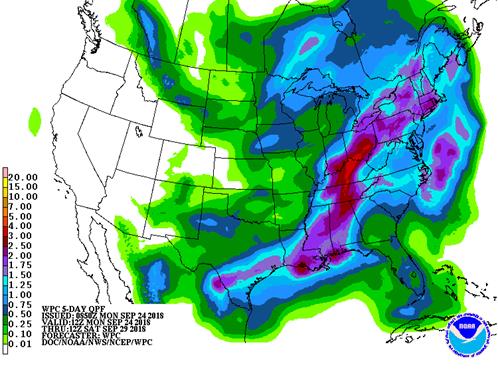 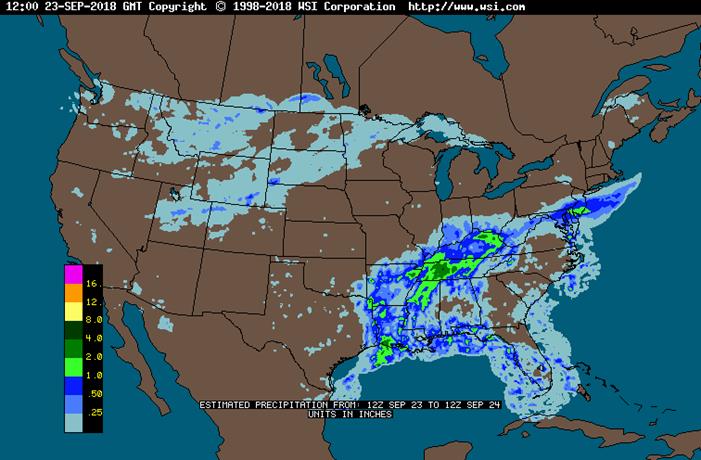 Below taken from World Weather Inc.

·         Central and southern Oklahoma and north-central Texas saw some heavy rain over the weekend.

·         Rain fell across western and northern Delta through parts of the Tennessee River Valley to Kentucky and farther northeast into New York, Pennsylvania and Virginia.

·         Frequent showers will occur in the Delta this week raising concern over cotton quality and delaying the advancement of cotton, soybean, rice and sorghum harvest progress.

·         The Midwest will see a mix of rain and sunshine this week and next week. Rainfall by next Sunday will vary from 0.10 to 0.60 inch with local totals near 1.00 inch with the exception of Kentucky and immediate neighboring areas where 1.00 to 3.00 inches and locally more may occur because of rain early to mid-week

·         Hard red winter wheat areas may experience net drying this week with some areas completely dry while others in Oklahoma and Texas might receive another 0.20 to 0.75 inch – most of that occurs during mid-week.

·         Northern Plains will receive 0.50 to nearly 2.00 inches of moisture from Montana to northern Minnesota with it occurring in waves

·         U.S. bottom line includes an immediate need for drying in Oklahoma, Arkansas and northern Texas after weekend flooding. Additional drying is also needed in southern Minnesota, Wisconsin, Iowa and southeastern South Dakota where flooding occurred earlier last week. The southeastern states need continued limited rainfall after Hurricane Florence ravaged the area. Too much rain has been occurring in the Delta and this pattern may continue for a while resulting in some cotton and rice quality decline and harvest delays for many summer crops. Moisture in the northern and central Plains will be good for winter wheat planting, emergence and establishment. Cooling will slow maturation rates and some eventual frost and freezes are expected, but they may only help to defoliate soybeans and expedite summer crop maturation. Very little bean quality decline is expected because of cool temperatures. Frost and freezes are most likely this weekend through the first few days in October.

·         South America’s greatest rainfall this week will be concentrated on northeastern Argentina, far southern Brazil and immediate neighboring areas of Paraguay and Uruguay

·         Eastern Europe will receive periodic precipitation this week, but mostly north of Italy and the Balkan Countries

·         Russia’s lower Volga River Basin and southeastern Ukraine may not get abundant moisture for a while, but light precipitation will still be beneficial

·         Eastern Australia will receive some rain during the coming week, but no general soaking is likely and much of the moisture will be confined to far northeastern New South Wales and southeastern Queensland

·         Western Australia may receive some rain Friday through the weekend, but it is not expected to be well organized

with lighter rain in a few

areas and local amts over

amts in the west;

The CFTC Commitment of Traders report showed some big moves over the 5—day trading period, most notably money managers selling a net 77,800 contracts of corn basis futures and options combined. 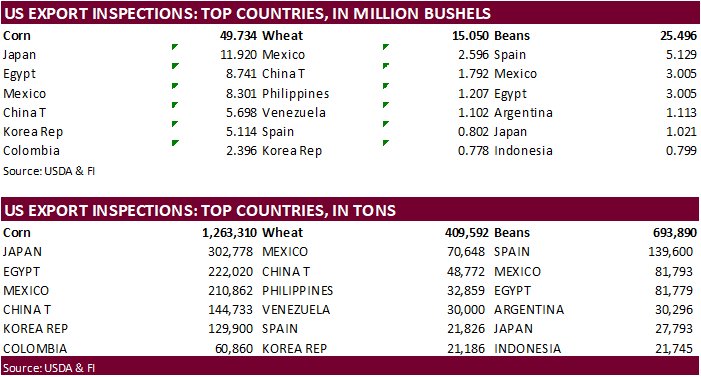 ·         China cancelled their trip to the US to discuss trade talks and took out a 4-page ad in a IA newspaper over the weekend.

·         Most of the US federal government could shut down at the end of this week unless Congress passes — and Trump signs — a short-term spending bill to keep $$ running. 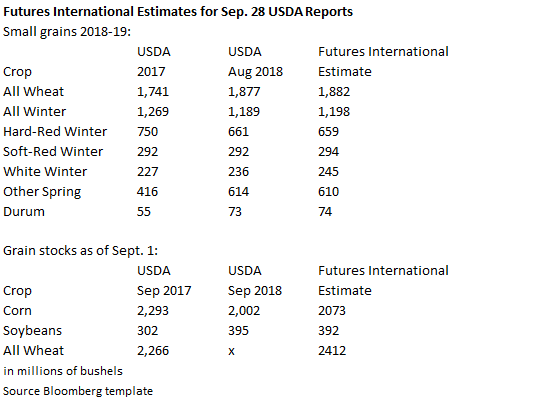 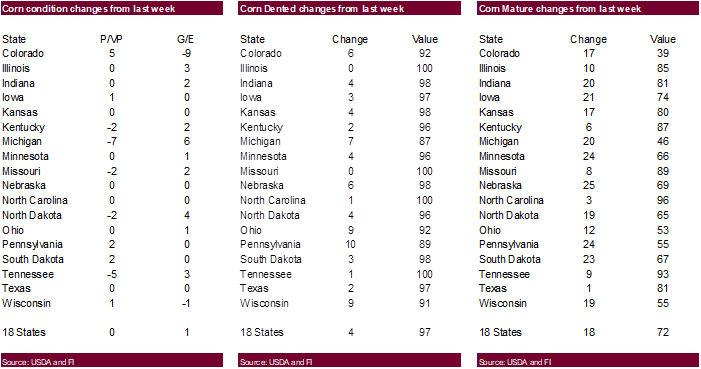 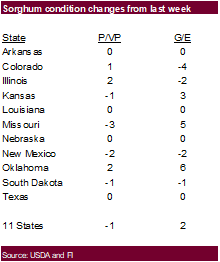 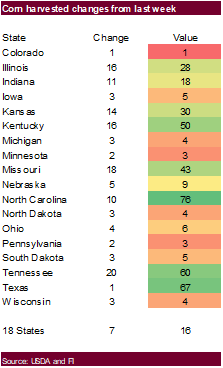 ·         Soybeans were lower on ongoing US/China trade concerns. China said they will not come to the table until President Trump lays off the negative Tweets.

·         Some Argentina crush workers are back on strike for 24-hours in or near Rosario.

·         USDA reported US soybean harvesting progress at 14 percent, 1 point above a Reuters trade guess, and compares to 9 last year and 8 average.

·         USDA reported US soybean crop conditions at 68 percent, up one point from the previous week (trade was looking for unchanged) and compares to 60 last year and 63 average.

·         Our weighted crop index for US soybean crop conditions is running at 82.4 percent (82.4/100), 0.2 bu/ac above last week, above 80.5 a year ago and 81.4 average. Using this index against a 15-year trend yield history against FI crop conditions as of or near October 1, the US yield could end up near 53.3 bushels per acres (3.6/bu above the 49.7 fifteen-year trend yield), 0.5 bushel above USDA and compares to 49.1 bushels a year ago.  Using 88.628-million-acre soybean harvested area, production could end up near 4.724 billion bushels, if ratings remain unchanged from now until October 1. Our production estimate is 31 bushels above USDA. 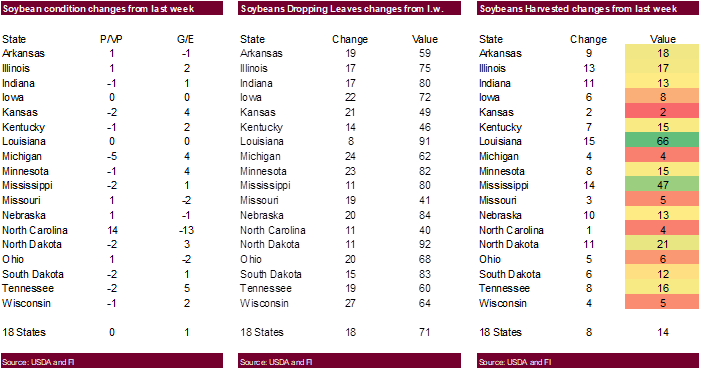 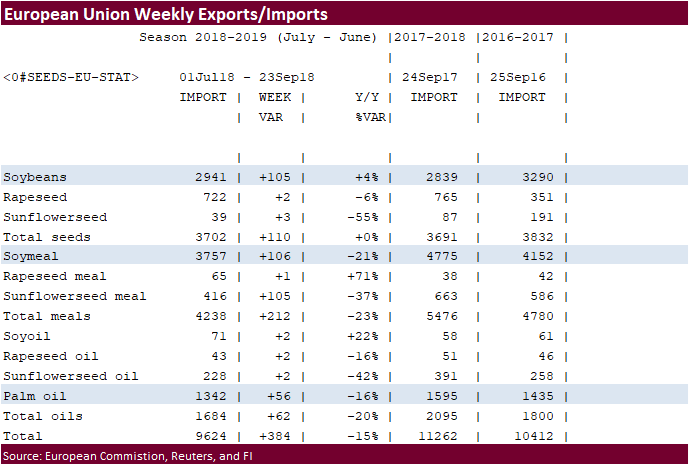 ·         US wheat traded higher on spreading against soybeans, higher Russian wheat prices in comparison to the previous week, and another downgrade to the Australian wheat crop by one of the banks (National Bank of Australia to 18.1MMT; USDA @ 20.0). They are lowest we have seen.

·         USDA reported US winter wheat planting at 28 percent, up 15 points from the previous week, 3 points above a trade average and compares to 22 last year and 26 average. 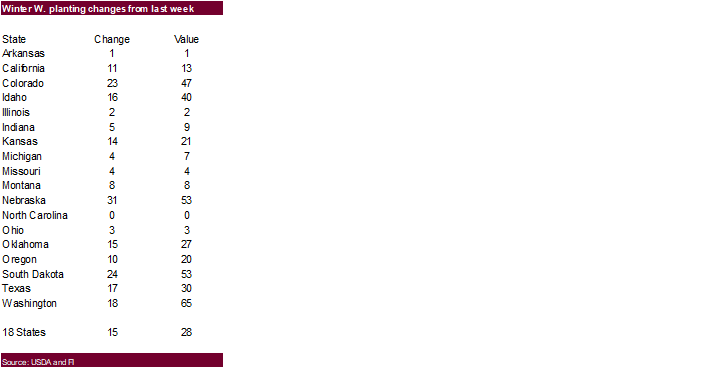 Our 2019 US wheat planting estimates in million acres:

·         Results awaited: Turkey seeks a total of 252,000 tons of red milling wheat for October 2-22 loading. It closes on September 22. The depreciation of the lira sent importers seeking Turkish wheat flour, causing them to restrict exports.  But countries like Iraq that heavily depend on flour from Turkey may have to import from other countries. 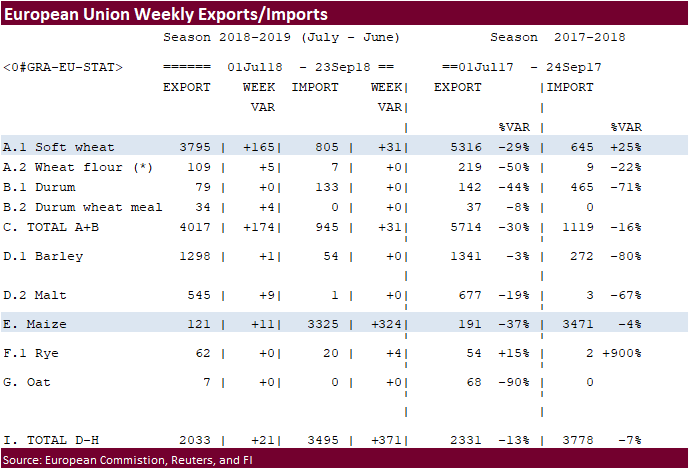