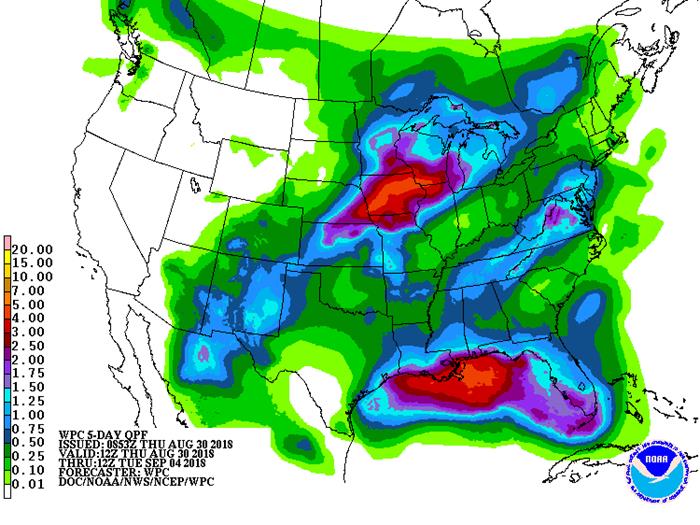 ・         Not much follow up rain is expected in Western Australia this weekend or next week. New South Wales and southeastern Queensland will get rain Thursday into Friday with a few showers early next week.

・         Dry conditions are raising planting and establishment concerns for central and eastern Ukraine into the middle and lower Volga River Basin, Kazakhstan and Russia’s Southern Region.

・         A large part of the western Corn Belt and northern Illinois will see frequent rounds of showers and thunderstorms through the first ten days of September, resulting in some flooding.

・         A mix of rain and sunshine is expected across the Delta and southeastern states through September 7.

・         Canada’s Prairies will remain dry from southeastern Alberta through central and southern Saskatchewan through September 7.

・         Northern and western Europe weather will see below normal precipitation through early September. 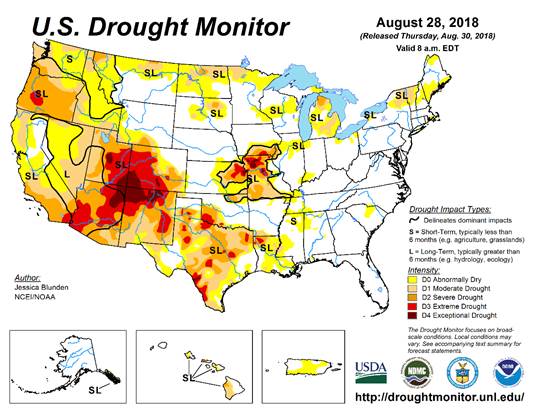 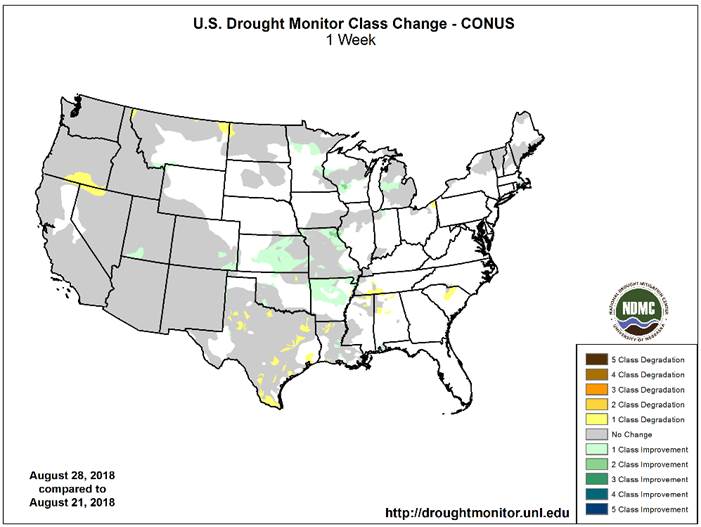 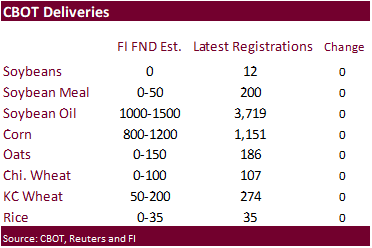 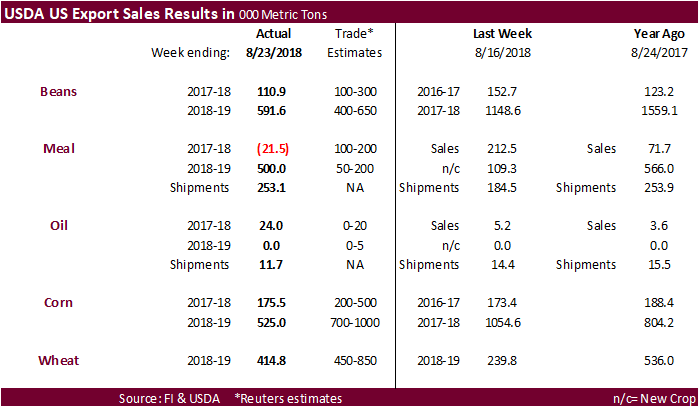 ・         Argentina increased their interest rate to 60 percent from 45 percent.  The rate is now the world’s highest.

・         Argentina’s central bank wanted to sell more dollars to support the drop in the peso but could not due to current conditions with the IMF, according to an insider.  The Arg CB could not offer more than $500 million USD at auction due to IMF restrictions.

・         A fifth confirmed case of African swine fever hit 185 pigs on a farm in Wuhu city in eastern China’s Anhui province. Look for at least 459 hogs to be culled.

・         The soybean complex traded lower on the large U.S. crop and the continuing reports of African swine flu in China.

・         After the bell, U.S. President Trump said he was ready to support $200 billion USD in tariffs as early as next week.  This along with the higher FCStone numbers will further pressure the overnight trade.

・         USDA export sales were ok for soybeans and very supportive for soybean meal and great for oil.

・         A report issued by the USDA Attaché in Argentina lowering soybean production to 36 million tons on drought, USDA is at 37 million tons on the last WASDE report.

・         Brazil and Argentina producers may hang onto their soybeans for inflation risk.

・         Brazil’s Supreme Court delayed their decision on the minimum freight rates, at least until after the Brazilian Presidential election in November.

・         Indonesia Biofuels Producer Association (APROBI) put Indonesia’s biodiesel exports at around 1 million tons, up from around 300,000 tons last year, in part to exports increasing for Europe, China and India. They see production of biodiesel around 5 million tons.

・         The increase in China soybean meal prices was thought to be over Q4 supply tightness.

・         A fifth confirmed case of African swine fever hit 185 pigs on a farm in Wuhu city in eastern China’s Anhui province. Look for at least 459 hogs to be culled.

・         Dry conditions are raising planting and establishment concerns for central and eastern Ukraine into the middle and lower Volga River Basin, Kazakhstan and Russia’s Southern Region.

・         South Dakota is nearly done with their spring wheat harvest.