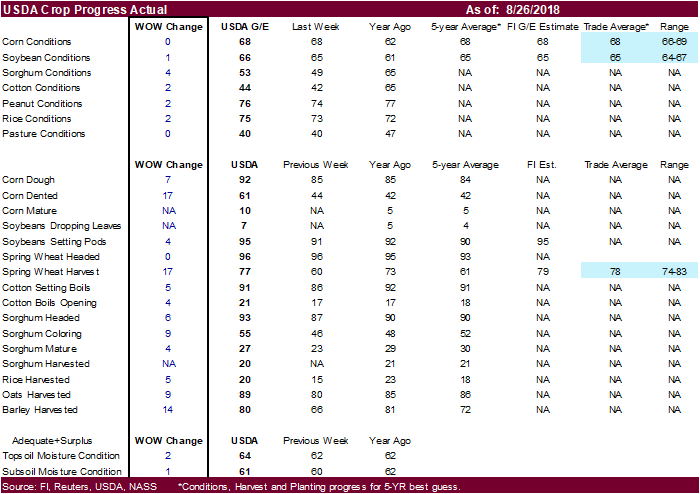 ·         Eastern Australia’s saw as expected rain over the weekend. 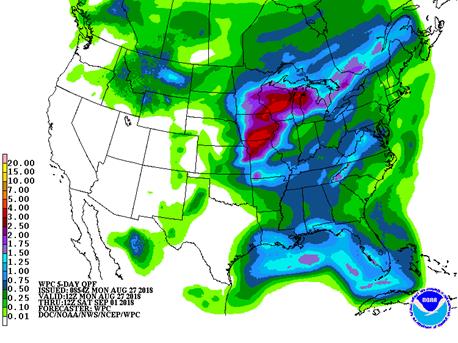 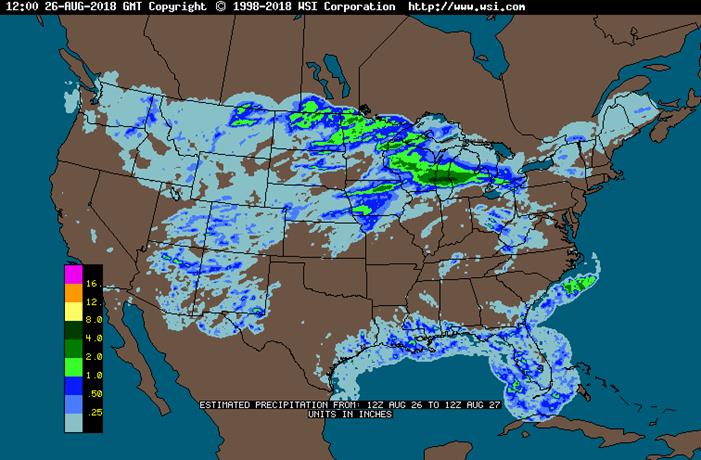 amts in the south; far

amts in the west

CME plans to increase storage fees for corn and soybeans. 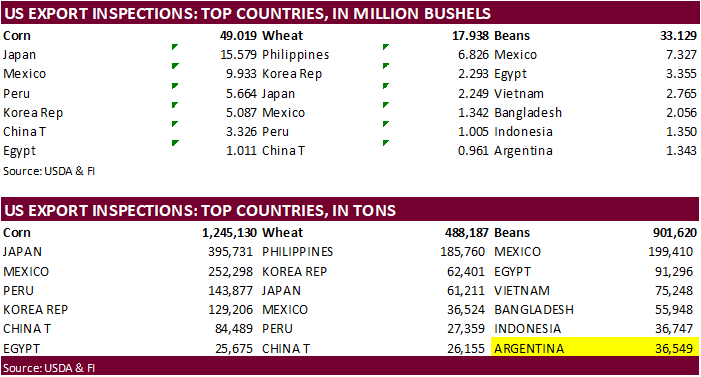 “Early on, the President instructed me, as Secretary of Agriculture, to make sure our farmers did not bear the brunt of unfair retaliatory tariffs. After careful analysis by our team at USDA, we have formulated our strategy to mitigate the trade damages sustained by our farmers. Our farmers work hard, and are the most productive in the world, and we aim to protect them,” said Secretary Perdue.

These programs will assist agricultural producers to meet the costs of disrupted markets:

·         USDA’s Farm Service Agency (FSA) will administer the Market Facilitation Program (MFP) to provide payments to corn, cotton, dairy, hog, sorghum, soybean, and wheat producers starting September 4, 2018. An announcement about further payments will be made in the coming months, if warranted.

·         USDA’s Agricultural Marketing Service (AMS) will administer a Food Purchase and Distribution Program to purchase up to $1.2 billion in commodities unfairly targeted by unjustified retaliation. USDA’s Food and Nutrition Service (FNS) will distribute these commodities through nutrition assistance programs such as The Emergency Food Assistance Program (TEFAP) and child nutrition programs.

·         Through the Foreign Agricultural Service’s (FAS) Agricultural Trade Promotion Program (ATP), $200 million will be made available to develop foreign markets for U.S. agricultural products. The program will help U.S. agricultural exporters identify and access new markets and help mitigate the adverse effects of other countries’ restrictions.

“President Trump has been standing up to China and other nations, sending the clear message that the United States will no longer tolerate their unfair trade practices, which include non-tariff trade barriers and the theft of intellectual property. In short, the President has taken action to benefit all sectors of the American economy – including agriculture – in the long run,” said Secretary Perdue. “It’s important to note all of this could go away tomorrow, if China and the other nations simply correct their behavior. But in the meantime, the programs we are announcing today buys time for the President to strike long-lasting trade deals to benefit our entire economy.”

·         USDA SAYS PLANS $1.2 BLN IN COMMODITY PURCHASES TO BE SPREAD OUT OVER SEVERAL MONTHS, INCLUDING PORK AND DAIRY PRODUCTS

·         US crop conditions were unchanged in the combined good/excellent categories for corn (down one good and up one in excellent).  The trade was looking for unchanged.

·         US crop conditions were unchanged in the combined good/excellent categories for corn (down one good and up one in excellent).  The trade was looking for unchanged. 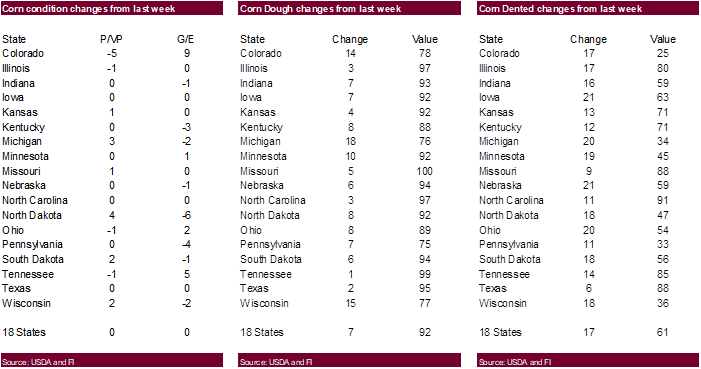 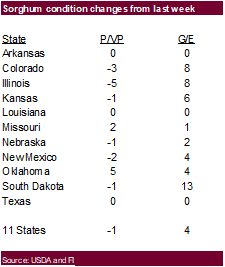 ·         Another 4 million tons of China corn reserves will be offered on Thursday and Friday.

·         Soybean prices hit session lows early and paired some losses for several reasons. USDA unveiled their trade damage payment plan for producers and soybean and pork farmers appear will benefit most from the program. $3.6 billion of the $4.7 billion set aside for producer payments will go to soybean producers (with a cap for each producer). About 1500 acres max could take benefits, in our view. The US also announced a trade deal with Mexico which helped bring the soybean market back. USDA export inspections showed soybeans for Argentina (36,549 tons). What pressured the market early was the Friday afternoon results of the ProFarmer crop tour that pegged the soybean yield above USDA’s August estimate. Technicals are bearish. US weather forecast remains favorable for the most part.  Eastern Australia saw rain over the weekend which is good for canola production.

·         Soybean oil ended higher on strength in WTI and unwinding of meal/oil spreading.

·         US soybean crop conditions in the combined G/E categories increased one point (up one in excellent).  The trade was looking for unchanged.

·         China has been increasing hog slaughter while replacement piglets are slowing.

·         US soybean crop conditions in the combined G/E categories increased one point (up one in excellent).  The trade was looking for unchanged. 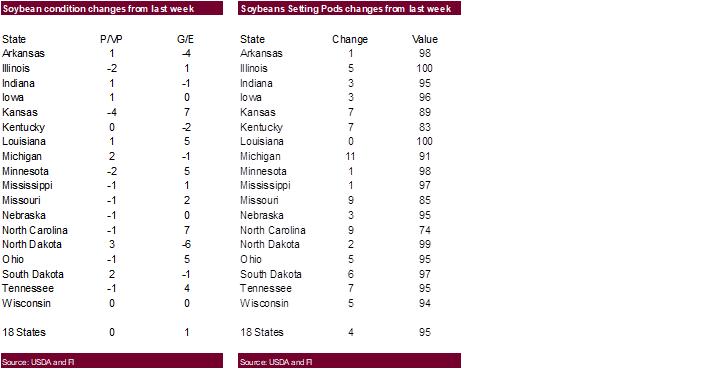 US spring wheat harvesting progress increased 17 points to 77 percent, one point below a Reuters estimate, and 16 points above a 5-year average.