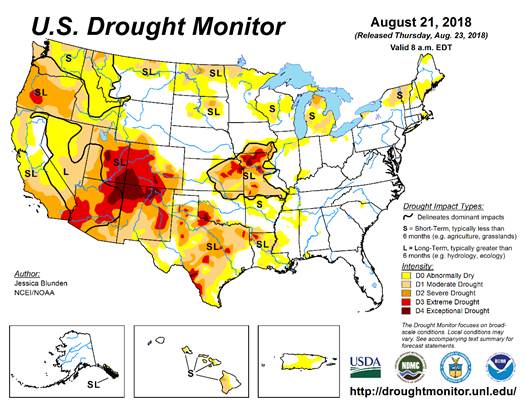 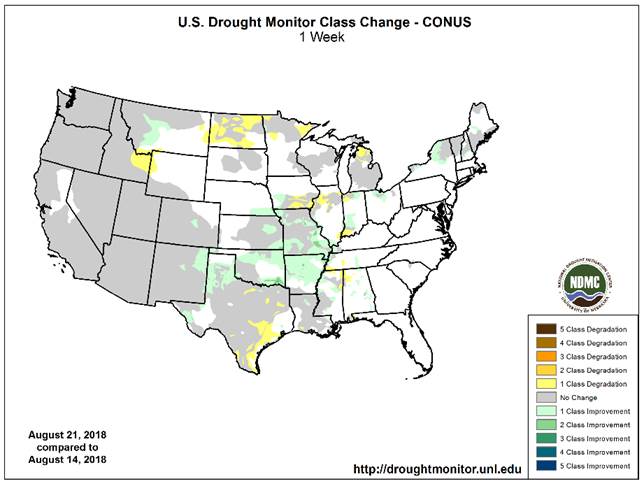 ·         The second week of the weather outlook calls for cool temperatures across the US Corn Belt but that could change depending on ridge development.

·         Before then, look for rain across the US northwestern Midwest areas Friday and Saturday.

·         Day four of the US crop tour showed yields in Minnesota could end up below average from too much rain and flooding early in the growing season.

·         Day four of the US crop tour showed yields in Minnesota could end up below average from too much rain and flooding early in the growing season.

·         After the close, The White House released a statement saying the trade talks between the US and China had ended.  The White House also said that the two nations “exchanged views on how to achieve fairness, balance, and reciprocity in the economic relationship.”  The soy complex did sell off into the close and the lack of and solid agreement between China and the U.S. may have weighed on the market.

·         Day four of the US crop tour showed yields in Minnesota could end up below average from too much rain and flooding early in the growing season which forced replants in some areas.

·         The USDA on Monday, not Friday, may unveil its $12 billion producer, stockpiling, and agriculture chain assistance program. Agri-Pulse via a DJ story mentioned the payment rate for soybean farmers has been preliminarily proposed at $1.65 per bushel and 1 cent per bushel for corn farmers. The AgSec said he hoped to have the program up and running after Labor Day.

·         Malaysia is back from holiday and November palm futures fell to a 1-week low.

·         Day four of the US crop tour showed yields in Minnesota could end up below average from too much rain and flooding early in the growing season which forced replants in some areas.

·         Day three of the crop tour shows western IA pod counts are very good as they average 15.5% higher than last year. USDA looks for all Iowa soybean yield to increase 4.4%. Eastern IA will be survey today/Thursday. IL pod counts are up 8% from last year while USDA predicts a 10.3% rise in the soybean yield for the state.

·         Wheat futures finished lower in a see-saw trade.  Technical selling was seen all session, outside of an early session bid following the floor open that briefly turned SRW positive.

·         Russia may see a short to medium-term boost in wheat exports after the currency hit its lowest level since April 2016 and wheat prices from other major exporters appreciated in recent months. SovEcon warned of strengthening domestic Russia wheat prices in the months ahead.