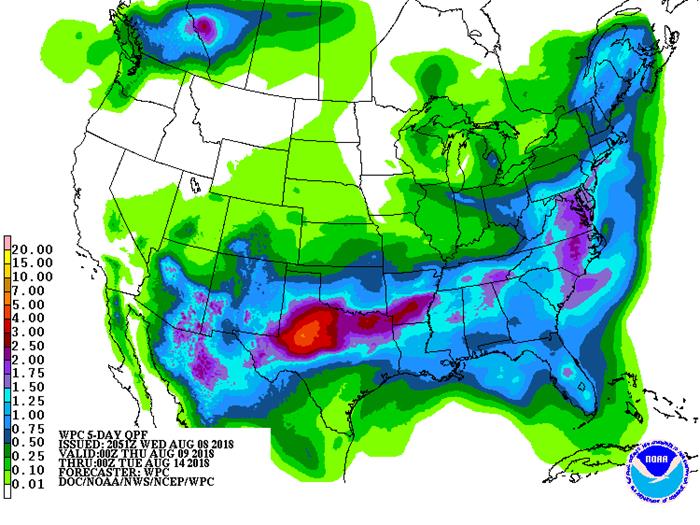 Texas
cotton, sorghum and corn production areas from the Blacklands into West Texas are still advertised to receive significant rain in the coming week and World Weather, Inc. believes the forecast will verify to some degree

Rainfall
of 0.25 to 0.75 and locally more will occur in far northwestern parts of West Texas and in a part of the Panhandle while 1.00 to 3.00 inches results in most other areas in West Texas with locally more possible

The situation needs to be closely monitored for changes

Blacklands
rainfall may range from 1.00 to 3.00 inches with locally more

Some
rain may fall in New South Wales on days 9 or 10, but confidence is low and resulting rainfall is not likely to be very great

Other
Australia crop areas will remain in favorable condition

Sufficient
relief should occur to reduce concern over the region, but some pockets of dryness will continue in Jilin and Liaoning

These areas should become short to very short of topsoil moisture by the second half of next week, although subsoil moisture will be a little better

Some
showers are expected on a daily basis, but warm temperatures and the light intensity of resulting rainfall will lead to net drying

Greater
rain in the second week of the outlook will bring some relief to parts of Gujarat, Rajasthan, western Madhya Pradesh and parts of Maharashtra

Canada’s
Prairies will continue to suffer from heat and dryness

A
cool front is expected this weekend and early next week that will restore more seasonable temperatures, but rainfall accompanying the frontal system will not be very great

U.S.
western Corn Belt will dry down over the next several days

Some
dryness relief is possible parts of Missouri, Kansas and southern Iowa during the middle to latter part of next week, but confidence is low

Southern
and eastern Midwest crop areas are expected to remain in good shape during the next ten days, but some net drying is possible in the northeast including Michigan

Rain
frequency will be greatest in the lower and eastern Midwest

Temperatures
in the U.S. Midwest will be seasonable warm over the next couple of weeks with a warmer than usual bias in the northwest

U.S.
rainfall overnight was lightly scattered across the Midwest with areas from southern Kansas and northern Oklahoma to the Ohio River Valley getting the most significant rainfall

U.S.
temperatures trended hotter in the northwestern Plains Tuesday and remained very warm to hot in the southern and western states

Northern
U.S. Plains will receive very little rain and experience periods of hot weather during the next ten days

Dissipation
is expected by Friday

Hurricane
John will stay well off the west coast of Mexico restricting rain in crop areas.

Temperatures
will become more seasonable in the north and west

Rain
is expected to fall erratically, but between the two frontal systems many areas will get “some” rain

More will be needed to bring soil moisture closer to normal

This will impact soybeans, sunseed and late season corn 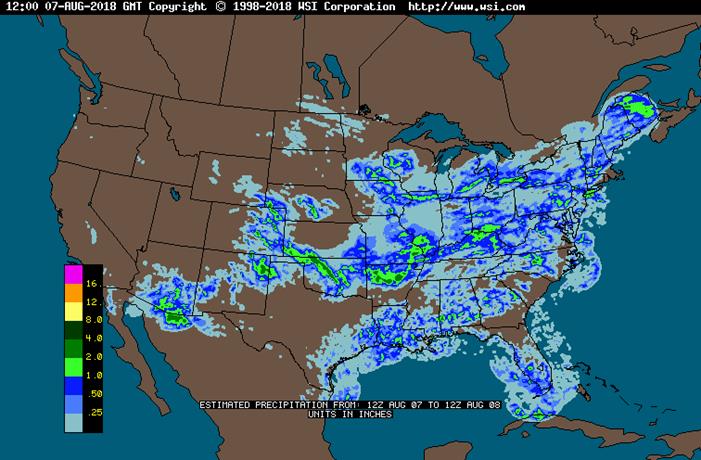 east Ms. and Ala.

·
Rising concerns over US corn crop conditions and near record US weekly ethanol production underpinned the market but prices ended only a half cent higher. A $2.00-$2.39 decline in US WTI crude oil limited
gains in corn. Over the short-term, we are neutral corn while bullish soybeans and wheat.  Large US corn stocks and steady US exports are seen limiting upside potential for the market, but that view could change on Friday after USDA releases an update on US
and world S&D’s. If
we are correct on our US corn supply and ending stocks estimates for US corn, and are right on our soybean estimates, we look for soybean/corn spreading post USDA report on Friday.

·
September WTI crude oil was down $2.38/barrel to 66.78 on slowing China demand and higher than expected national stocks as indicated in the weekly EIA report. Note US crude oil is not included in the list
of products for the August 23 China import tariffs of $16 billion.

·
Argentina may not have any corn to offer after October.

·
A large grain company estimated Brazil corn exports could decline to 20 in 2018, lower side of many other projections, and 10 million below Brazil’s AgMin forecast earlier this year. If realized, USDA 2018-19
US corn exports could expand at least another 5 million tons from current forecast to 61.5MMT, or 200 million bushels to 2.425 billion.

·
Anthrax was discovered in a pig in Romania.

·
Note 5 days ago China’s AgMin issued a warning after African Swine Fever was detected in Shenyang, which led to the culling of about 1000 pigs.

·
US ethanol production was up 36,000 barrels per day to 1.100 million barrels, second largest in our weekly history, behind 1.108 million for the week ending 12/1/17.  Traders were looking for a slight increase. 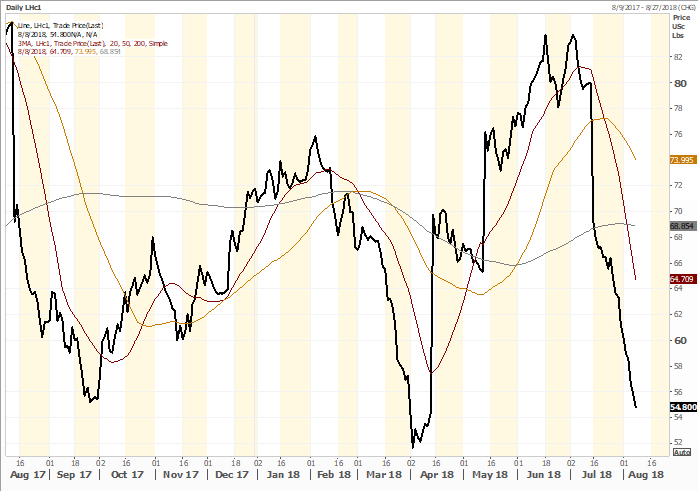 ·
Taiwan’s MFIG seeks 65,000 tons of optional origin corn on August 9 for shipment between October 21 and November 9, later if from the US PNW.

·
China sold about 59.4 million tons of corn out of reserves this season. 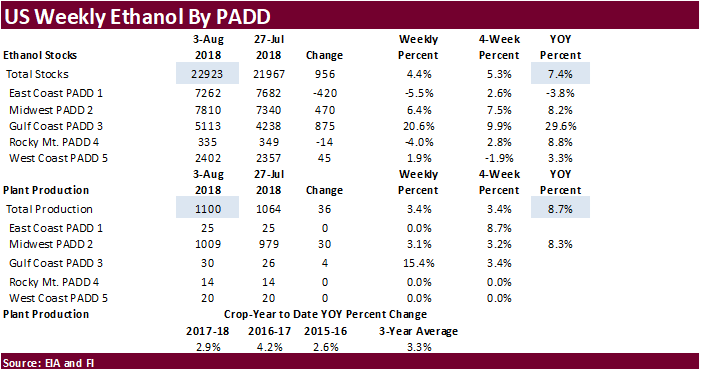 ·
USDA’s August US Crop Production and S&D’s are due out on Friday.
If
we are correct on our US ending stocks estimates for soybeans and corn, soybeans could be friendly after the release of the report and gain on corn.

·
Germany’s Farm Cooperatives estimated the German rapeseed crop at 3.47 million tons, down from 4.26MMT in 2017.

·
China customs data reported July China soybean imports declined to 8.01MMT from 8.70MMT in June and below 10MMT in July 2017.

·
China imported 52.88MMT of soybeans during the Jan-July period, 3.7 percent below 54.89MMT year ago. Some analysts look for Aug and Sep imports to total 8MMT each. (Reuters)

·
Oil World in their weekly update suggested China may have to start importing soybeans again from the United States as SA will run out of supplies. 15 million tons during the Oct-Mar period was noted.

·
The July soybean import figures were viewed on the lower side by at least one analyst, and August China soybean imports could end up higher than 9 million tons due to delayed arrivals of soybeans in late July.
Time will tell. Brazil exports of soybeans on the other hand could slow in August and September to between 6.5-8.0MMT and 6.0-7.0MMT, respectively.

·
Low water levels in Argentina are starting to reduce the amount of commodities loaded onto ships.

Traders
look for Malaysian palm oil stocks to hit a 5-month high. We expect a gradual draw over the next several months.  MPOB Malaysian July S&D estimates by Reuters:

·
The US wheat/corn ratio is trading at its highest level since December 2014.

·
Ukraine harvested 30.7 million tons of grain with an average yield of 3.43 tons/hectare.

·
Germany’s Farm Cooperatives estimated the German grain crop at 36.3 million tons, including 19.2 million tons of wheat, down from 45.5MMT and 24.0MMT, respectively, in 2017.  The grain harvested would be the
lowest in 24 years, if realized.

·
Reuters noted “feed wheat in Germany’s South Oldenburg market for September/December was offered for sale well over milling wheat at around 229 euros ($265) a ton, about 10 euros more expensive than milling
wheat.”

·
The weekly crop report for Manitoba, Canada, indicated dry conditions continued across much of the province, and crop stress is rising.

·
Thailand passed on 39,000 tons of feed wheat, optional origin, for September shipment. Offered were around $240/ton, $5-10 above what they wanted.

·
Jordan issued an import tender for 120,000 tons of hard milling wheat on August 9.