·
Note critical rain will fall through Tuesday across southern IA before a week of dry weather sets in. Next critical rain even will be during the August 15-17 period. 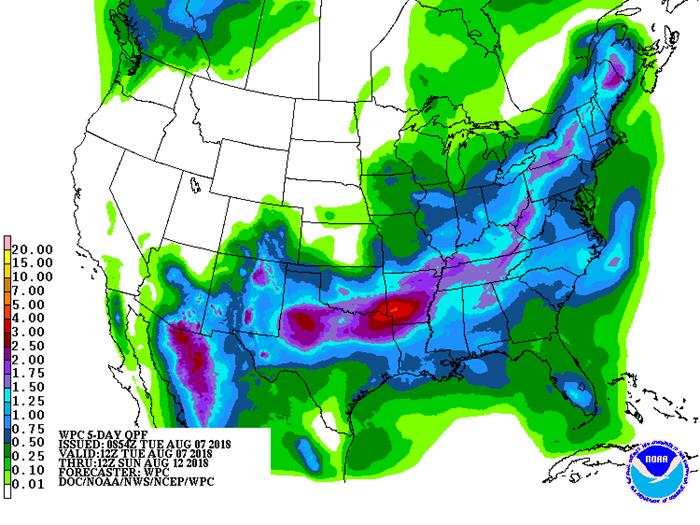 o
Texas cotton, sorghum and corn production areas from the Blacklands into West Texas are still advertised to receive significant rain in the coming week and World Weather, Inc. believes the forecast will verify to some degree

·
All cotton areas will be impacted

·
Rainfall of 0.25 to 0.75 and locally more will occur in the northwestern parts of West Texas while 1.00 to 2.00 inches results in most other areas with locally more possible

·
The situation needs to be closely monitored for changes

·
These areas should become short to very short of topsoil moisture by the second half of next week, although subsoil moisture will be a little better

·
Rainfall was reduced from the forecast in much of the nation

·
Some showers are expected on a daily basis, but warm temperatures and the light intensity of resulting rainfall will lead to net drying

·
There is still plenty of time for improved weather, but the situation needs to be closely monitored

·
A cool front is expected this weekend and early next week that will restore more seasonable temperatures, but rainfall accompanying the frontal system will not be very great

·
Follow up rainfall is restricted, according to the latest model data

o
U.S. western Corn Belt weather may dry down gradually over the next ten days, but rain will fall in parts of Missouri and Neighboring areas today and early Wednesday

·
Southern and eastern Midwest crop areas expected to remain in good shape, but net drying is likely in the upper Midwest and in southern Iowa

o
Temperatures in the U.S. Midwest will be seasonably warm over the next couple of weeks

o
A disturbance in the central Atlantic Ocean may acquire tropical characteristics this week, but the system is so far from land it will have a minimal impact.

·
Rain is expected to fall erratically, but between the two frontal systems many areas will get “some” rain

·
More will be needed to bring soil moisture closer to normal

REST
OF THE WORLD

o
U.S. rainfall overnight was greatest from Kansas and southeastern Nebraska through northern Missouri to parts of western Ohio and southern Michigan

·
Southern Iowa did not receive much rain of significance

·
Rain totals of 0.50 to 1.50 inches occurred in many areas, according to Doppler radar

·
Most of Texas, Oklahoma and the Delta were dry along with the northwestern Plains and the far western United States

o
U.S. temperatures Monday were in seasonably in the northern Midwest and quite warm in the far western states and in the lower Midwest

·
Seasonably warm conditions occurred din much of the south

·
Showers will continue frequent in the Delta and southeastern states

·
Stress to most crops and livestock are expected later this week and into the weekend, but “some” cooling is expected late in the weekend and next week that will bring “some” relief, but rainfall is not likely to be very significant

o
Southeastern Canada’s corn, soybean and wheat production areas will see a favorable mix of weather during the next two weeks.

·
Crop yields may be down, although irrigation has continued to be applied

·
Temperatures will be warmer than usual, but not excessively hot

·
Highs in the 80s and 90s Fahrenheit are most likely

o
A favorable mix of rain and sunshine is likely in the western parts of Russia, Ukraine, Belarus and Baltic States during the next two weeks

·
Corn, sorghum, dry beans, sugarcane, and coffee in west and southern parts of the nation will either stay in good condition or see some improvement

·
The drier periods will be ideal for late season winter crop maturation and harvesting in western Russia, Belarus, the Baltic States and parts of western and northern Ukraine

·
Too much moisture might threaten sunseed and unharvested spring cereal quality

o
Xinjiang, China will experience warm temperatures and much less potential for rain through the end of this week

·
A few strong thunderstorms and locally heavy rain will be possible

o
Southeast Canada corn, soybean and wheat conditions should be good in the coming week

·
A large grain company estimated Brazil corn exports could decline to 20 in 2018, lower side of many other projections, and 10 million below Brazil’s AgMin forecast earlier this year. If realized, USDA 2018-19
US corn exports could expand at least another 5 million tons from current forecast to 61.5MMT, or 200 million bushels to 2.425 billion.

·
Morocco opened its door to US poultry imports.

·
Anthrax was discovered in a pig in Romania.

·
The Bloomberg poll shows a US corn production low/high of 14.210-14.740 billion, or 530 million bushel spread, with an average of 14.416 billion, 186 million above USDA. FI is using 14.543 billion, 127 million
above the Bloomberg corn production average. If we are correct on our corn supply and ending stocks estimates for US corn, and are right on our soybean estimates, we look for soybean/corn spreading post USDA report on Friday.

–Optional
origin sales of 179,000 metric tons of corn for delivery to unknown destinations during the 2018/2019 marketing year.  An optional origin contract provides that the origin of the commodity may be the U.S. or one or more other exporting countries.

·
China sold about 59.4 million tons of corn out of reserves this season.

·
Oil World in their weekly update suggested China may have to start importing soybeans again from the United States as SA will run out of supplies. 15 million tons during the Oct-Mar period was noted.

·
The CNGOIC lowered its outlook for 2018-19 China soybean imports to 94 million tons from 95 million, and sees 2017-18 imports at 95 million tons, also down 1MMT from previous. They see July-Sept. soybean arrivals
at 26MMT and noted Chinese soybean crushers are intentionally delaying inbound shipments as supplies of the oilseed from state reserves are ample. China 2018-19 soybean meal consumption est. at 74.48MMT.  (Bloomberg)

·
USDA’s August Crop Production and S&D’s are due out on Friday.

·
A Bloomberg poll calls for U.S. soybean ending stocks to come in at about
648 million bushels versus USDA’s estimate of 580 million in July, and the soybean yield to be initially surveyed by NASS at
49.8 bu/ac versus their working estimate of 48.5 bu/ac. FI is looking for 49.0 yield and US ending stocks to increase to 616 million bushels. If we are correct, soybeans could be friendly after the release of the report on Friday.

–Export
sales of 145,000 metric tons of soybeans for delivery to unknown destinations during the 2018/2019 marketing year.

·
China sold 1.054 million tons of soybeans out of reserves so far, this season.

Traders
look for Malaysian palm oil stocks to hit a 5-month high. We expect a gradual draw over the next several months.  MPOB Malaysian July S&D estimates by Reuters:

·
Earlier the US wheat/corn ratio hit a three-year high and should continue to climb higher over the coming weeks.

·
Saudi Arabia said they will no longer buy wheat or barley from Canada amid a diplomatic dispute.

·
Ukraine may propose limiting milling wheat exports to 8 million tons, down from 10 million tons set in 2017-18.

·
Jordan issued an import tender for 120,000 tons of hard milling wheat on August 9. 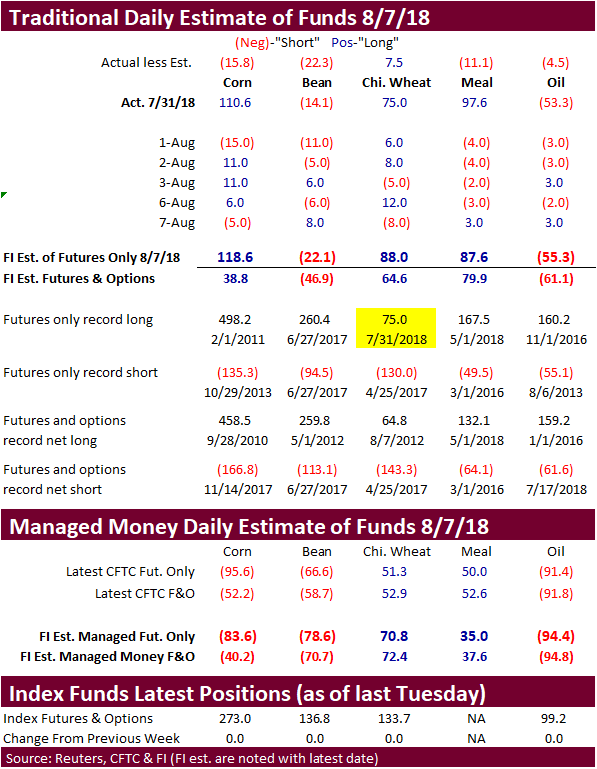