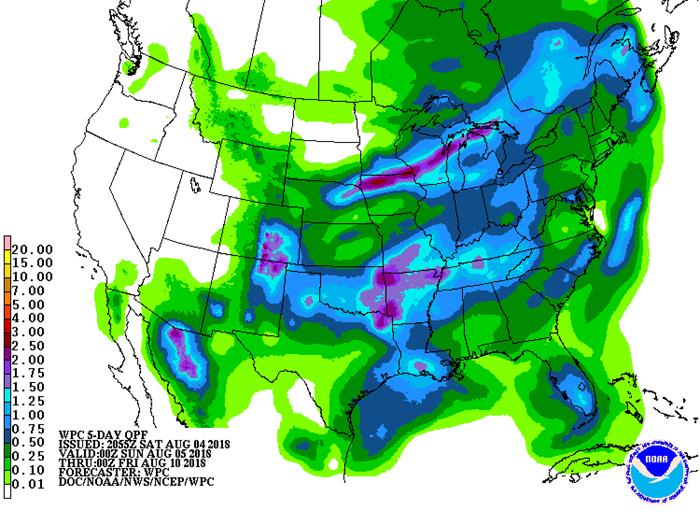 ·         The near-term weather model appears to be drier for the central WCB through early next week.

·         Crop stress will increase this weekend with rising temperatures.

·         The ridge of high pressure building up over the Great Plains and a part of western Corn Belt during the coming weekend and next week is still slated to happen, accelerating net drying and limiting rainfall across the Plains, Midwest and Delta from August 5th through August 14.

most often with some

and a few nearby areas;

·         For the week ending July 31, traditional funds were buyers of corn, Chicago wheat, KC wheat and MN wheat. Futures only for soybeans traditional funds sold a little and bought a small amount in the futures and options positions.

·         For managed money, funds were large buyers of corn, bought a good amount of Chicago wheat and added longs to KC wheat.

·         Traditional funds were about 16k less long in corn that trade expectations, 22k more short in soybeans were the traditional funds posted a short position of 14,100, heavier buyers in Chicago wheat than anticipated and didn’t sell as much meal as the daily estimate of funds suggested. 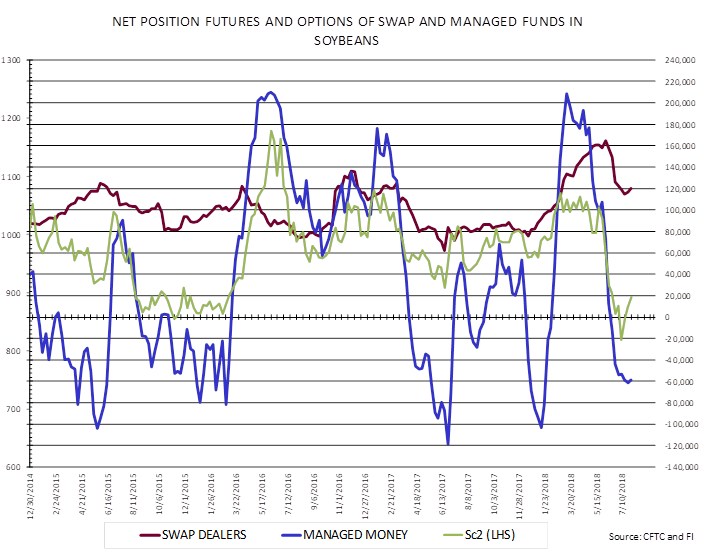 ·         China Govt Says It Will Immediately Impose The Import Tax Measures If The U.S. Starts To Slap Tax On China Imports (livesquak)

·         A Reuters report mentioned Mexico sees key NAFTA issues resolved with the US next week.

·         French corn conditions for the week ending July 29 fell by 5 points from the previous week to 66 percent, below 79 percent at this time last year.

·         Soybeans on Friday saw a choppy trade after China said they plan to levy additional tariffs on about $60 billion US products if the US adds more tariffs, so it’s subject to US actions they said.

·         Soybeans settled higher after a wide two-sided trade. Soybean meal fell on additional talk Argentina will start exporting meal to China, and soybean oil was higher in part to a higher lead in palm oil. .

·         US crop conditions are expected to be unchanged in soybeans.

·         Safras reported Brazil’s new-crop soybean sales at 18 percent, up from the very slow pace of 8 percent a year ago. Even though producers are reluctant sellers, high Brazil soybean premiums over the US and good China demand enticed forward selling. For the current crop year, 84 percent of the soybean crop had been sold, up from 74 percent from this time last year.

·         Yesterday we learned Argentina’s crushing industry was making a big push to get China to agree on importing soybean meal from Argentina crushers. Today the Argentina AgMin said they like to export “major amounts” of soybean meal to China starting May 2019. Apparently officials were in China today finalizing the paperwork. It will be interesting to see if Argentina continues to import US soybeans even after they realize a rebound in their crop.  Meanwhile, a shift to China in export soybean meal as a destination raises the question how much of the EU market could be lost.  Each Argentina cargo unshipped to the EU could be a an extra cargo shipped from the US.

·         China approved the imports of sunflower seeds from Bulgaria.

·         US wheat futures settled mixed, with Chicago and KC lower on the front end and far back months moderately higher. MN ended higher for most positions on US spring wheat crop concerns.

·         The Ukraine AgMin increased their estimate for the wheat crop to 24 million tons from previous 22-23 million tons, including 13MMT of milling wheat. We are using 25.1MMT. The Ministry of Agrarian Policy and Food of Ukraine keeps the forecast for wheat harvest at 23 million tons against 26.2 million tons in 2017.

·         Northern Europe weather conditions have not changed much.

·         Britain’s wheat crop could fall to a five-year low according to AHDB (Agriculture and Horticulture Development Board) of 13.5 million tons, down from 14.8 million last year. Low yields are mainly contributing to the decline.

·         India’s weather office noted there is a 47 percent chance of India recording below average rainfall during the second half of the monsoon season which stretches between June to September. The first two months of the season were below normal.

·         Egypt said they have enough strategic wheat reserves for 4 months.

Write to Rodney Christian at csstat@dowjones.com