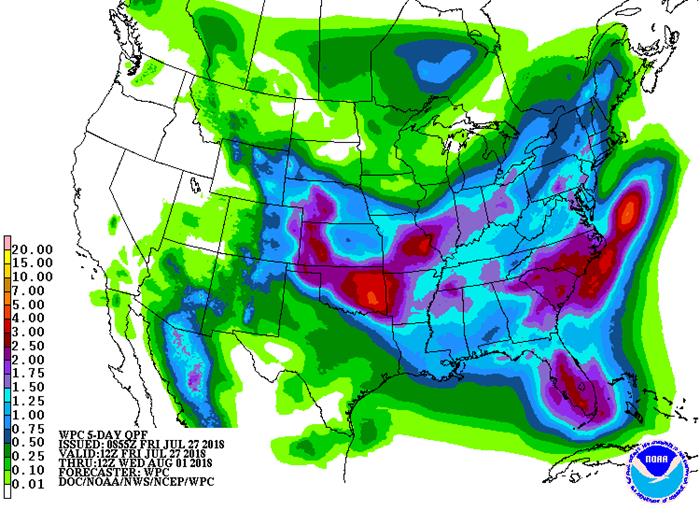 ·
We look for US corn and soybean conditions to be unchanged to down 1 when updated early next week, and spring wheat ratings to slip 2 points in the combined G/E categories.

·
Cooler temperatures continue to dominate the bulk of the Midwest. Favorable conditions remain for corn silking and filling. Soil moisture levels remain a concern, especially for the southwestern Corn Belt. Other pockets of dry areas include
eastern Kansas, southern Iowa, northern Missouri growing areas, and central IL. The central and parts of the northern Great Plains remain in good shape after a wet week. The southern Midwest and Delta are slated to get rain over the next week.

·
The ridge of high pressure is expected to stay centered over the southwestern US through mid-next week. 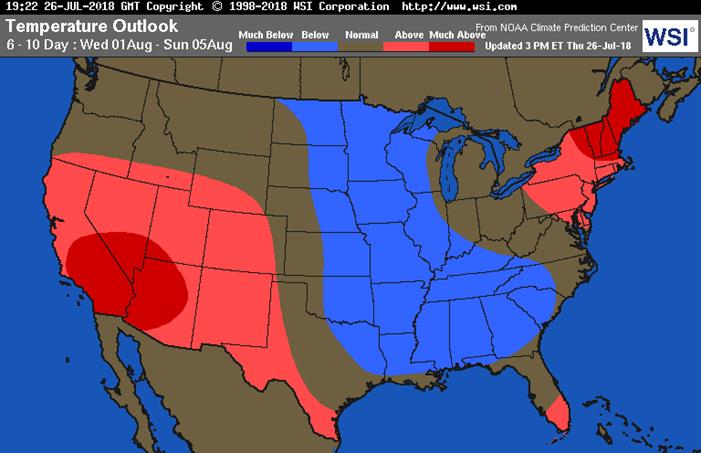 ·
Damage to some rice and citrus is possible

·
Property damage will be greatest from flooding

·
The past week of upper 90- and lower 100-degree heat killed 65 people and sent 22,000 to hospitals for heat-related illnesses

·
Jongdari will offer relief from the heat, but more flooding and some damage is expected to the same area already impacted by some very extreme weather this month

·
Excessive heat in the western United States through next week will stress livestock and most crops, irrigated or unirrigated

·
Extreme highs over 100 will reach into the U.S. Pacific Northwest with 90s Fahrenheit expected in British Columbia

·
Other areas of hot weather in Northern Hemisphere, include western Europe with 90s Fahrenheit reported from Spain to Scandinavia this week and extremes near and above 100 in parts of Spain

·
North Africa has cooled down a bit, but was over 120 degree Fahrenheit for several days in the past week

·
U.S. southern Plains will be in the 90s to slightly over 100 during the coming week and possibly hotter late in the first week of August

·
Rain is already advertised for New South Wales and Queensland this weekend with 0.10 to 0.50 inch

·
Tropical Storm Jongdari is expected to reach Honshu, Japan late in the weekend and will bring some relief to the recent hot, dry, weather through all of western Japan early next week.

·
France, Germany, the U.K. and Scandinavia will receive some rain this weekend and then trend drier and warmer again during the second half of next week into the following weekend.

·
Stress will continue into Saturday until the rain arrives and some temporary cooling will occur into early next week, but warmer and drier conditions will return briefly late next week.

·
Second week outlook, August 3 to 9 will not be as hot and dry as suggested Thursday; seasonably warm temperatures and some shower activity will impact the European continent

·
Eastern Europe and the far western CIS will see frequent rain maintaining concern over unharvested small grain quality for a few more days, but much less rain is expected in western Russia by the weekend and improving conditions will occur
next week; Belarus, western Ukraine and eastern Poland will stay wet into next week and then trend drier

·
Subsoil moisture will carry crops favorably during this period of time, but greater rain must return in August

·
Rain is expected this weekend from Shandong to Sichuan offering a little break in the recent drying, but areas to the north and south will continue to dry out

·
U.S. Midwest weather will be mild to cool with sufficient rainfall to maintain good crop development over the next two weeks

·
Dry pockets will remain in the southwest and far northeast parts of the region, despite expected shower activity

·
Southern U.S. Plains livestock and crops will experience some relief from hot dry conditions next week, but no general soaking of rain is expected

·
Key Texas crop areas will stay dry into Saturday, but some rain will fall in West Texas today and again Sunday into Tuesday

·
SW Canada Prairies, northwestern U.S. Plains and U.S. Pacific Northwest will stay drier and warmer biased through the next week

·
Some rain is expected in the Prairies late Sunday into Tuesday, but the drought areas in the south will receive the least rainfall

south Il. to north In.

with
a few bands of

more
each day; some


days may be dry

·
The daily estimate of funds position was way off for corn and soybeans.

·
Note the funds futures only net position in corn were net long 71,400 contracts, while futures and options combined in corn are net short 53,400 contracts.

·
Commercials in corn for the futures and options combined really turned around their positions since late May when they were net short 245k to current net long 59.7k.

·
Private exporters reported to the U.S. Department of Agriculture the following activity:

–Export
sales of 154,100 metric tons of soybeans for delivery to unknown destinations during the 2018/2019 marketing year.

·
China sold about 57.7 million tons of corn out of reserves this season.

·
China plans to offer another 8 million tons of corn from state reserves in early August.

·
September soybeans ended higher in the last eight out of ten sessions. Nearby soybeans are at a three-week high.

·
Producer selling increased across the WCB on Friday.

·
GAPKI reported Indonesia exports of palm and palm kernel oils up 7.5 percent from a year earlier to 2.29 million tons. Domestic stocks of palm oil rose to 4.85 million tons by the end of June from 4.76 million
a month earlier.

–Export
sales of 270,000 metric tons of corn for delivery to unknown destinations during the 2018/2019 marketing year; and

·
China sold 1.031 million tons of soybeans out of reserves so far, this season.

·
Chicago and KC wheat futures opened and traded much of the day surprisingly lower this morning on follow through profit taking from the recent rally. Paris wheat was lower. Yields from the US SW crop tour
were disappointing, and this created a two-sided trade in Minneapolis, which ended higher.

·
French crop conditions for soft wheat were unchanged from the previous week at 71 percent. 88 percent of the crop had been harvested as of July 22, up from 64 percent previous week.