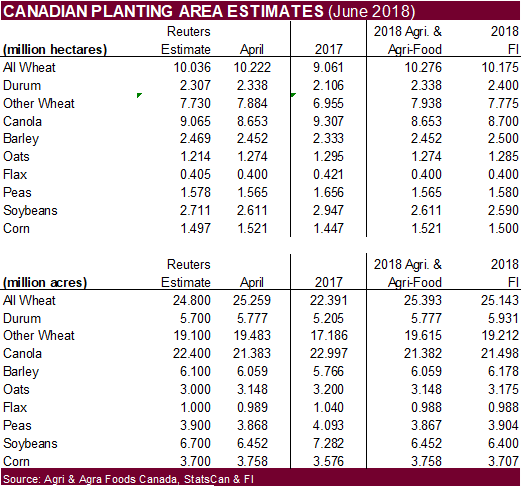 ·         Trade estimates were well off actual changes for the futures only net positions for corn (75,200 contracts more long than expected), soybeans (24,500 more long), soybean meal (20,800 more long than expected), and soybean oil (5,400 less short than estimated).  The daily corn guesses showed large speculators were not as heavy sellers during the carnage that unfolded over the 5-day period leading up through Tuesday.

·         The largest changes this week were money managers reducing their net long positions in corn.

·         The funds position is perceived as bullish corn as large specs hung onto long positions even after soybean futures fell sharply.

·         Saudi Energy Minister Khalid Al-Falih over the weekend said it will be closer to 1 million barrels per day.

The USDA Cattle on Feed report showed June 1 COF at 104.1 percent, seven tenths of a percent above traders’ expectations. Placements were much higher than expected and marketing were in line with a Reuters trade average.

·         The soybean complex ended higher on Friday from bottom picking. Soybeans ended the week lower, for the fourth consecutive week. July was up 14.0 cents, August up 14.50 cents, and November up 14.75 cents. Soybean meal ended $6.40-$7.30 higher. Soybean oil finished only 3-16 points higher. Old/new-crop spreads were active (bear spreading). The moderately higher close in soybean oil disappointed some traders after WTI ended more than $3.00/barrel higher on Friday. If meal and soybeans continue to rebound, we like owning soybean oil.

See the PDF for more commentary and graphs