MARKET WEATHER MENTALITY FOR CORN AND SOYBEANS:  U.S. planting weather will improve with drier and warmer conditions in the coming week. Faster crop development is also anticipated. In South America, conditions have not changed much, and Brazil’s second season corn crop will continue to fill and mature into early June under mostly favorable conditions.

Harvest weather is advancing well in Argentina and the planting outlook for Australia is fair to good, although greater rain is needed in many canola production areas. There is also need for rain in central and eastern portions of Saskatchewan while planting delays due to too much rain continue in parts of western Alberta.

Central and parts of northern China need rain for some of its unirrigated coarse grain and oilseed production areas and not much is expected for a while.

Europe’s dryness in the southeast has been largely eliminated in recent weeks along with dryness in Ukraine, but northwestern parts of the continent continue to dry out. Rain in France and Germany is needed soon to protect summer grain and oilseed production potentials.

Weather today will likely have a mixed influence on market mentality.

MARKET WEATHER MENTALITY FOR WHEAT:  Concern about Black Sea and eastern CIS New Lands’ dryness continues to ease. The only areas that will experience serious dryness will be in Kazakhstan and the lower Volga River Valley, although some areas in the southeastern New Lands will also experience some crop moisture stress until greater rain evolves. The southeastern New Lands will get some rain next week.

Northwestern Europe’s dry bias remains a concern for some of its small grain crops and a close watch on the situation is warranted. Little to no rain is expected in the U.K., northern France and northern Germany for at least another week. Rain in Eastern Europe and the western CIS will be great for their small grains.

Rain in Australia will be limited to southern coastal areas only during the coming week to ten days which may raise some concern for interior crop areas as time moves along. South Africa still needs rain in its wheat areas as does western and some southern Argentina crop areas.

Some wheat damage may have occurred from flooding rain in interior southern Brazil late last week, but the lighter rain in Sao Paulo, Paraguay and Mato Grosso do Sul was very good for those crops. Conditions are expected to improve in southern Brazil, but additional rain coming up soon will disrupt the drying process.

Canada’s Prairies are too wet in the west and a little too dry in portions of central and eastern Saskatchewan and west-central Manitoba. Changes in Canada are at least a full week away with rising crop stress in the dry areas of Saskatchewan and west-central Manitoba. Ontario and Quebec are experiencing better wheat development conditions, although recent heat has accelerated drying trends.

Heat and dryness are now slated for the western U.S. high Plains region through the next week to ten days. This will stress immature crops that are unirrigated resulting in some lower yield and grain quality. The more mature crops will be sped faster to full maturity by the heat.  Recent rain in Nebraska and northern Kansas was good for wheat development and yield.

U.S. spring wheat planting and establishment is advancing well. Some rain would be welcome, but the drier areas may not get much until late next week. 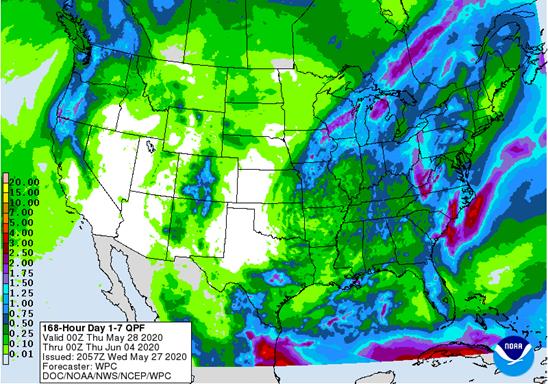 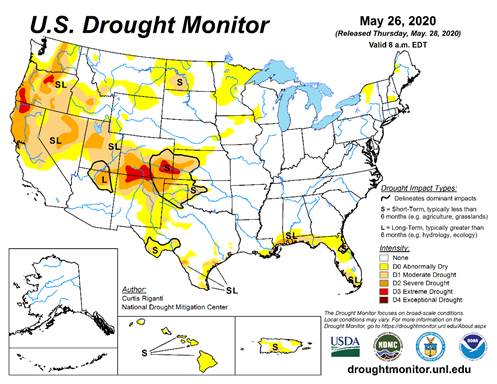 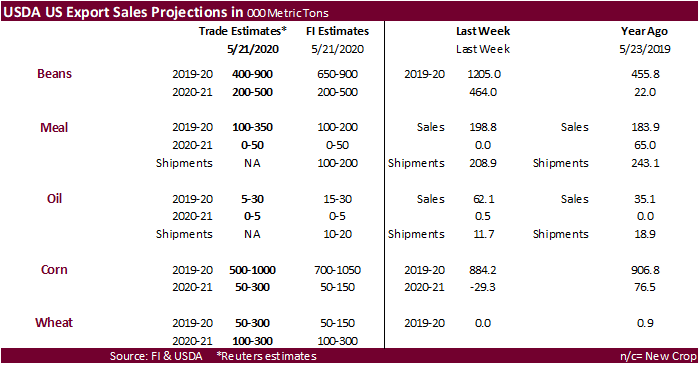 ·         The advance seasonally adjusted insured unemployment rate was 14.5 percent for the week ending May 16, a decrease of 2.6 percentage points from the previous week’s revised rate.

·         Corn futures traded higher by mid-morning on firm US corn basis. Positive US weekly ethanol data added to the supportive undertone.  Chicago corn basis jumped 15 cents to 15 over the July.  Good rain showers today across the US corn belt did little to limit gains.  July corn yesterday closed above its 20-day MA. Today it broke above the 50-day MA at 329.00, something not seen since January, but was unable to close above it.  The rally had nothing to do with the 2020 US corn outlook, or the upward revision to the EU corn production.

·         In years US producers see rapid plantings there tends to be an expansion in the corn area.  With 70 percent combined good/excellent, the US corn crop is looking up above 16 billion bushels, versus 13.663 billion for 2019.

·         The USDA Broiler Report showed eggs set in the US down 2 percent and chicks placed down 5 percent.

Weekly US ethanol production increased 61,000 barrels to 724k, highest since late March but well below the Jan-Feb average of about 1.05 million.  Gasoline supplied increased from the previous week but is still well below average.  Ethanol stocks fell 450,000 barrels to 23.176 million, a considerable drop from where they peaked at 27.689 million on 4/17. 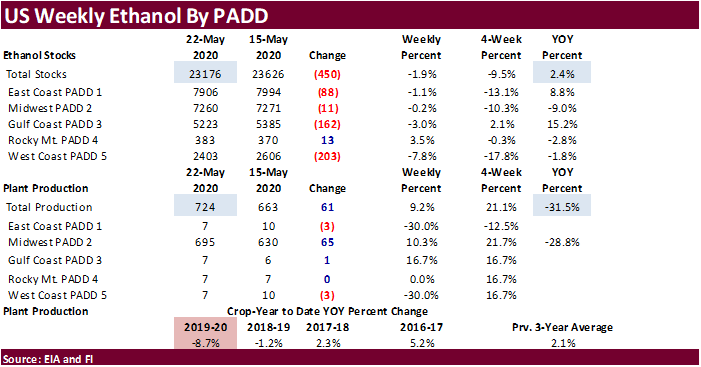 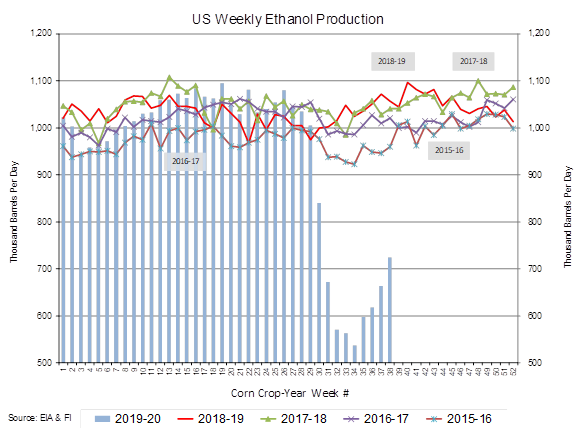 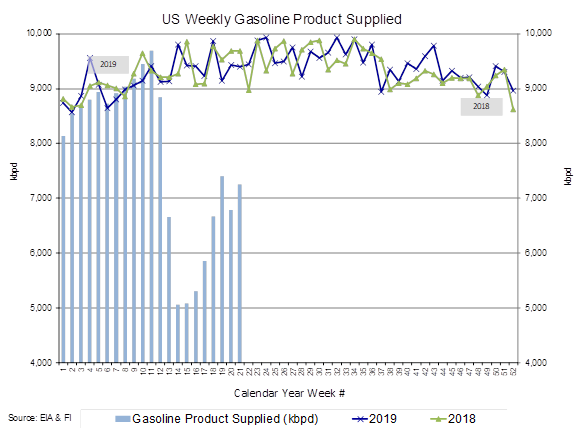 Thought this was interesting to see 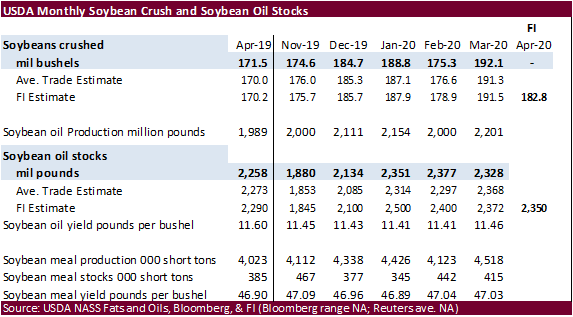 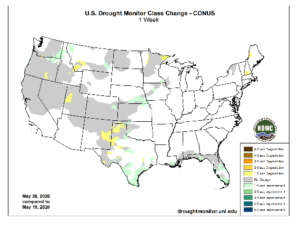