US
ag markets were mixed. USD traded lower. US stocks fell towards the end of the session.  WTI traded higher. Jordan passed on wheat.  Japan is in for food wheat this week.

SST’s
were near zero by the beginning of May. 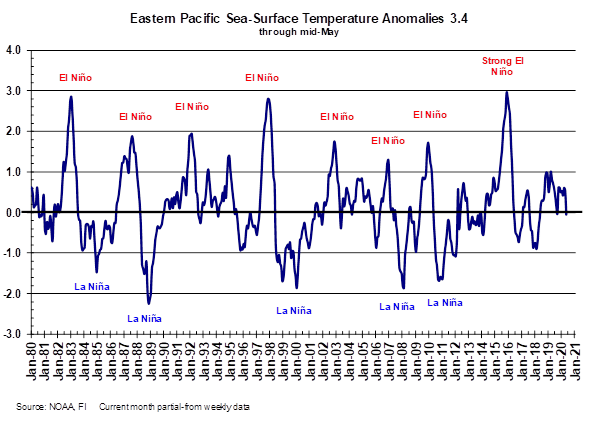 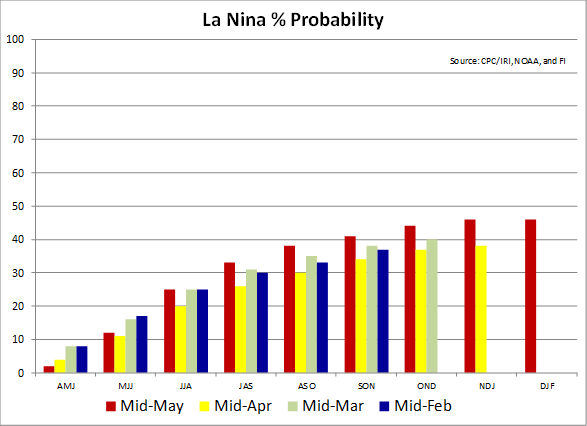 A little more delay is expected in the eastern U.S. Midwest planting this week due to rain and mild temperatures. Rain a part of the northwestern Corn Belt during the weekend was good for areas that had been drying out, but more rain is needed in those areas.

Better
than expected rainfall in a part of the southeastern U.S. states this week will improve crop conditions in many areas.

Rain
in western Canada’s Prairies this week will stall spring fieldwork Wednesday into Friday while weather in the east will be dry and warm favoring spring planting progress.  More rain in Ontario, Canada this week will keep fieldwork on hold for corn and soybean
production areas. Next week looks drier and warmer.

Brazil
and Argentina weather will not change much over the coming ten days and that should translate into ongoing good western Safrinha crop conditions in Brazil while conditions in the east are quite varied leaving many areas in need of rain. Harvesting in Argentina
may be briefly delayed by rain Wednesday and Thursday.

Good
harvest weather is expected in South Africa and India. Crop planting and establishment in China is expected to advance favorably.

Hot
and dry weather in the southern Balkan Countries during the weekend stressed some corn and soybean crops by depleting soil moisture. Temperatures were cooler Monday, but conditions were still dry.

Rain
in Ukraine and a part of Russia’s Southern region this week will be welcome, but more rain will be needed near the Black and Caspian Seas

Western
and northern Europe will be drying out this week. Crop stress is expected in Germany, northern France, the United Kingdom and parts of western Spain.

MARKET
WEATHER MENTALITY FOR WHEAT:  Weather
conditions around the world changed little overnight. Dryness remains in the southwestern U.S. Plains and in some areas near the Black Sea and developing in northern Europe. Dryness was also continuing in Western and South Australia with little potential for
greater rainfall this week.

Some showers may impact Queensland and far northern New South Wales, Australia briefly this week, but much more rain will be needed to induce the best autumn planting. Western Australia may receive some rain Sunday into Monday and that too will be welcome.

Small grain crops in Europe and the western CIS vary greatly from one location to another. Crops in northern France, the United Kingdom, Germany and the Balkan Countries need more rain. Portions of Kazakhstan, parts of Russia’s Southern region and areas near
the Black Sea in southern Ukraine also need rain along with the southwestern U.S. high Plains region.

Canada’s Prairies planting has been advancing favorably while wheat development in Quebec and Ontario should begin improving this week due to warmer temperatures. A storm in Alberta and western Saskatchewan Wednesday into Friday will stall farm progress.

Rain is needed in Argentina and South Africa to support planting.

Overall, weather today is expected to have a mixed influence with some bullish bias. 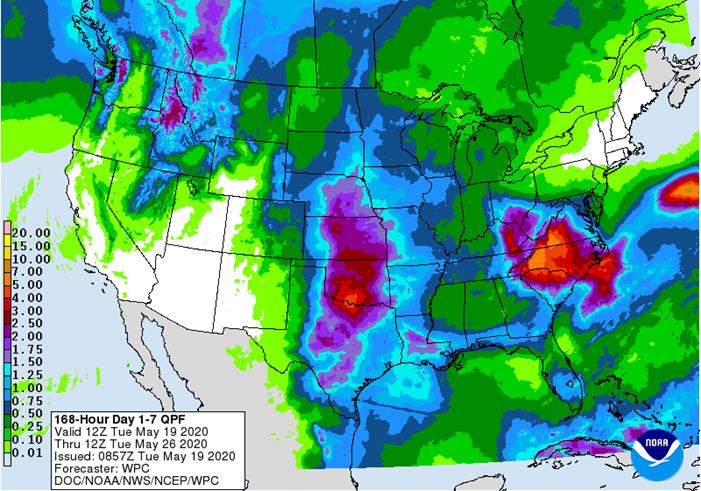 ·
Corn futures ended higher from ongoing short covering and lower USD.  At the open we heard there was some algo corn buying and short covering.  Prices ended off their contract day highs.  July corn took out
its last week’s high of $3.24 but failed to find much support above that level.  Futures are up three consecutive days, leaving some to think of a slight correction on Wednesday.

·
US corn plantings reached 80 percent complete, up 13 points from the previous week, one point below an average trade guess, well up 44 percent from last year and above 71 percent 5-year average.

·
US soybean plantings reached 53 percent complete, up 15 points from the previous week, three points below an average trade guess, well up 16 percent from last year and above 38 percent 5-year average.

·
Palm futures were up 40MYR or 1.9%. India has resumed buying Malaysian palm oil with at least 200,000 tons trading hands after India took a four-month break.  Malaysia plans to restart their B20 biodiesel
program in September.

·
Anec estimated Brazil second half soybean exports at a record 7.2 million tons, which could bring May exports to 14-15 million tons.

·
A private Argentina vessel lineup shows nothing booked for SME exports for the months of May and June compared to 236,000 tons for those combined months a year ago. 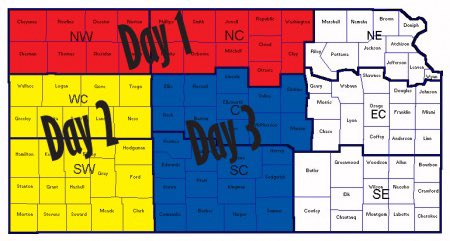