USDA
reported US ending stocks for soybeans, corn and wheat above trade expectations.  SA soybean production was revised lower but corn for Argentina and Brazil were unchanged.

Statistics
Canada will delay its April 24 planting intentions report due to the COVID-19 pandemic.

Bearish
for all three commodities but bulls waiting on the sideline added to positions.  One supportive feature was a combined downward revision to Argentina and Brazil soybean production by 3.5 million tons. 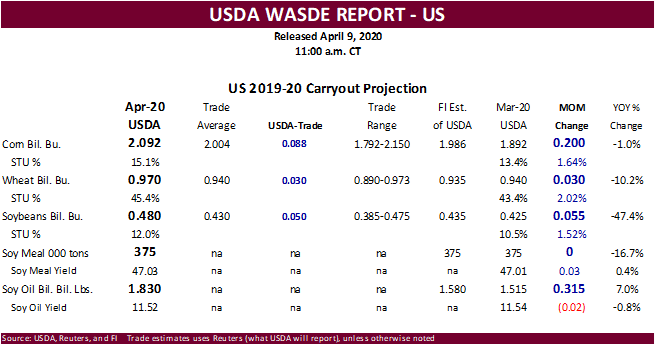 Some
temporary relief from dryness occurred in some Safrinha crop areas in Brazil earlier this week and the region will continue to be closely monitored over the next few weeks for signs of dryness and crop stress. World Weather, Inc. anticipates at least a part
of the production region will struggle with dryness in May during reproduction, but it is unclear how widespread that will be. Some new production forecasts will be released from Brazil today and the impact of drought in Rio Grande do Sul will be further enlightened.

Argentina
crop areas will experience net drying for a while, but crops will be fine during much of the period. A few areas may become a little dry, but it is late enough in the growing season to limit the impact on production.

South
Africa late season crop development will remain favorable and recent rain in eastern Australia along with that expected late this week will maintain better pre-planting soil conditions for canola. More rain will be needed throughout all of southern Australia
this month to more favorably moisten the soil for aggressive early season planting.

Europe’s
recent cold has not seriously hurt rapeseed. Warming under way now will accelerate a decrease in soil moisture and raise the need for rain. However, aggressive spring planting will begin while soil moisture is still marginally favorable and rain is absent.
Soil temperatures are rising quickly.

U.S.
planting conditions may improve for another day in areas that are not bothered with wet soil or rainfall, but cooling is under way and a weekend storm system promises precipitation for nearly all areas. Field progress will advance most significantly from the
lower Delta to northern Florida, Georgia and South Carolina today and into Friday and then rain this weekend will shut everything down again. South Texas rainfall recently has improved sorghum and corn conditions, but more is needed especially in the far south
of Texas. Precipitation periodically in the eastern Midwest and developing cool weather this weekend into next week will limit fieldwork.

China
is cooling down briefly which may slow the prospects for spring planting, but rapeseed development in key production areas will advance favorably.

Oilseeds
in Philippines are still struggling with dryness and significant rain is needed for its coconut and oil palm crops.

Overall,
weather today may have a mixed influence on market mentality.

Concern
in the market place may continue today over a broad based drying trend in Europe and limited soil moisture in Romania, southwestern Ukraine, Kazakhstan and eastern parts of Russia’s Southern Region. However, a burst in spring planting is expected in Europe
because of warm and dry conditions. It will not be long before complaints about poor emergence conditions will evolve because of dryness.

China
wheat development will advance a little faster briefly because of warmer weather, but expected cooling will slow things down a bit for a while. India’s harvest will begin to increase. Australia’s recent rain in New South Wales and that expected through Thursday
will be good for lifting topsoil moisture, but follow up rain must occur prior to the planting season late this month. All of the remaining crop areas in southern Australia still need a general soaking of rain before planting begins in late April and May.

U.S.
weather will trend cooler today, but will cool down more significantly during the late week and weekend and early next week with frost and freezes likely next week deep into the Plains and eventually across the Midwest. Permanent crop damaging conditions are
unlikely, but some vegetative development in the Plains may get burned back by frost and freezes.

North
Africa wheat is still rated favorably in Tunisia and northeastern Algeria and the same is true in Spain. Morocco crop production is still expected to be down for the year because of persistent dryness.

Wheat
in the Middle East will be frequent in eastern Turkey in much of Iran and parts of Afghanistan. Some of these areas need to start drying out to protect grain quality.

Overall,
weather today is expected to have a mixed influence on market mentality with a bullish bias. 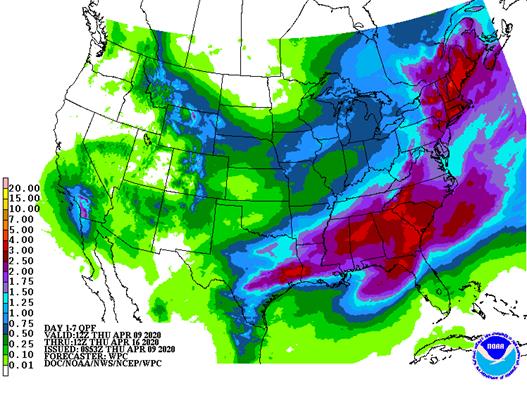 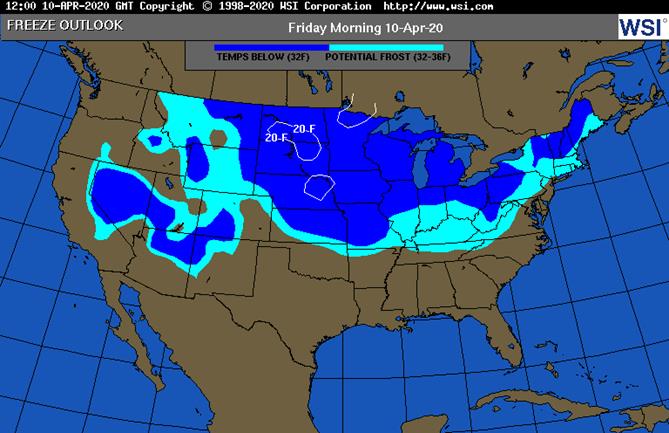 Actually,
due out 4/10 (wrong date in table above) 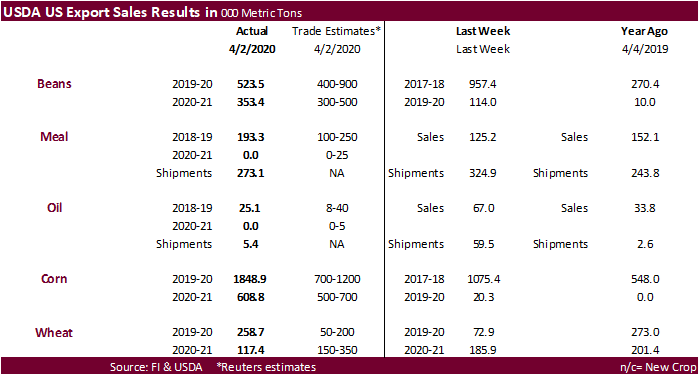 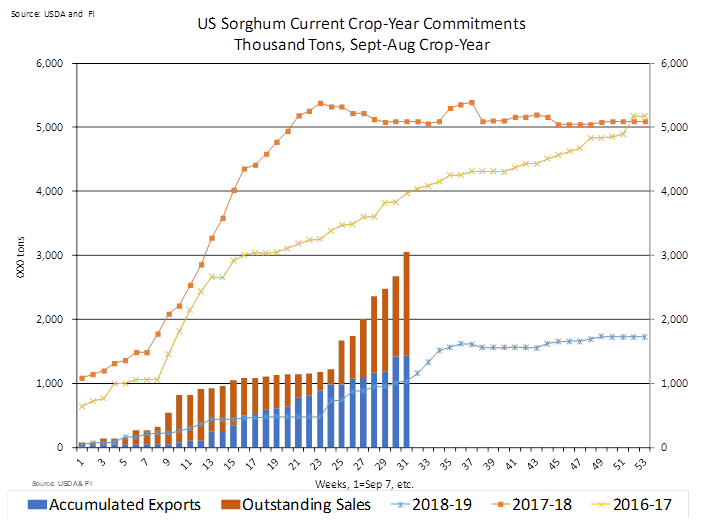 ·
Covid-19 cases are about peaking around now across the US

·
Corn ended 1.25-2.25 cents higher in a two-sided trade.  USDA’s April report was interpreted as bearish bu bull traders returned to the market anyway.  The USD was sharply lower.  WTI closed lower in nearby
contracts after a volatile trade.  Corn found strength during the trade from their energy prices after Russia and Saudi Arabia was said to be ending a price war.  Prior to the USDA report, corn saw a two-sided trade in part to
robust USDA export sales, slowing US corn plantings and strong import demand by South Korea so far this week.

·
Conab estimated the Brazil corn production at 101.9 million tons, 400,000 above a Bloomberg trade guess and 1.8 million tons above March projection. 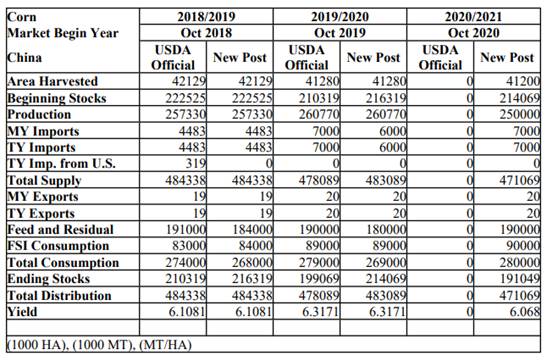