Russia
and Saudi Arabia may slow oil production.  China said they plan to buy oil for reserves and a rally in crude oil might be helping stocks out. US jobless claims were about double estimates at 6.648 million.

Weather
in South America, South Africa and India remains favorable for most oilseed development. India’s rapeseed will benefit from drier weather to help reduce a quality decline because of moisture during crop maturation and harvest season.

Improving
rainfall in Southeast Asia will be good for palm oil production and corn planting.

China’s
recent flooding rain in the south and that which is expected this weekend into next week will delay early season coarse grain planting and will keep rapeseed development a little sluggish as well. Dryness is also a concern in Yunnan.

U.S.
early season grain and oilseed areas are facing similar conditions with frequent precipitation and soggy field conditions to limit field progress for a while. Today’s somewhat drier biased outlook does offer a few pockets of drying, but the bottom line will
require much more precipitation.

Australia needs greater rain in the south prior to late April and May planting of canola. Rain in New South Wales and neighboring Wednesday and that which occurs through Friday will help to moisten some areas, but follow up rain will be needed.

Europe’s
drier weather bias in place today will improve field conditions for planting, but warming temperatures are needed before much early corn will be seeded. Winter rapeseed will be breaking dormancy, but no aggressive crop development is expected for a while.
Warming next week will help improve the situation. Timely rain will be needed once seasonal warming becomes a little more significant.

Overall,
weather today will provide a mixed influence on market weather mentality with a bearish bias.

India’s
drier weather this week will help protect winter crop quality after weekend weather trended a little too wet in the north. China winter crops are in mostly good condition with more aggressive development expected as soon as additional warming kicks in.

U.S.,
Russia and Europe winter crop conditions vary from fair to very good. Recent frost and freezes in southern production areas did not permanently harm crops. Warming is needed in all production areas.

There
is some need for timely precipitation in the drier areas of western Kansas, eastern Colorado, central Washington, Kazakhstan, eastern portions of Russia’s Southern Region, the lower Volga River Basin and southeastern Europe. Recent wet weather in Spain was
ideal for its winter grains.

North
Africa and the Middle East will need dry weather soon to promote grain maturation and harvesting. Too much moisture could result in a grain quality decline. Morocco has been too dry this year and will come up quite short on production.

Wheat planting prospects for Australia and South Africa are good this year because of recent rain and that which is expected over the next few weeks. 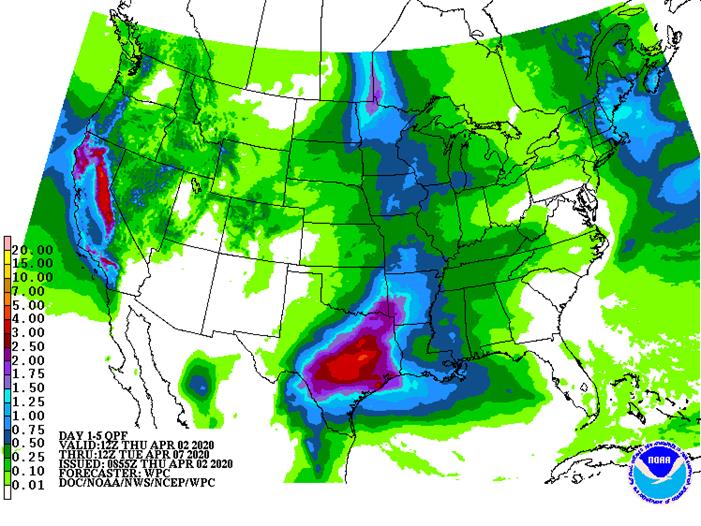 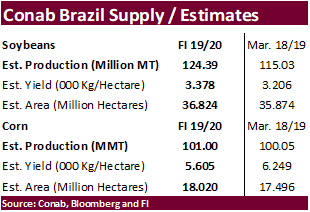 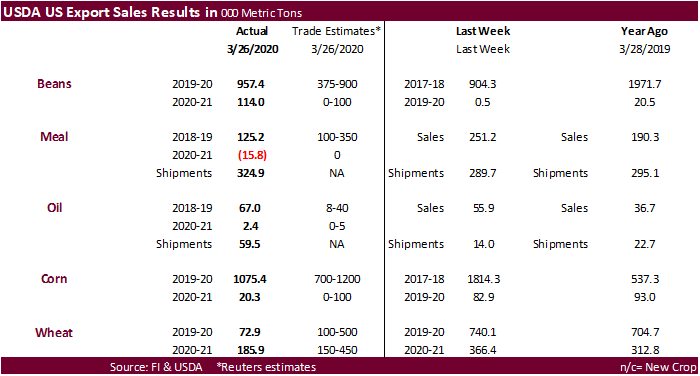 ·
President Trump announced Russia is considering cutting oil production. Trump: Oil Output Cut Could Be As Much As 15m Bbls

·
Corn futures started higher strength in WTI crude oil and US planting delay concerns, but bear spreading led to mixed settlement.  While we were in the process of downward revising our weekly ethanol production
estimates for the US (updated corn balance attached), WTI crude oil jumped about $4.00 barrel higher after President Trump said he brokered a deal with Saudi Arabia and Russia on lowering crude oil production.  This helped support corn prices.  Algeria bought
corn but origin was thought to be Black Sea or US rather than Argentina.

·
USDA export sales for corn of 1.075 million tons were at the high end of expectation.  See text after the wheat comment.

·
For new crop, several analysts are above 2.4 billion bushels, including myself,  for ending stocks.

·
USDA export sales for soybeans were above expectations at 957.4k tons and included China for 131,000 tons. SBM meal sales were poor but shipments were good. SBO sales were a marketing year high at 67k.   See
text after the wheat comment.

·
The Argentina BA Grains Exchange estimated the soybean crop at 49.5 million tons, down from a previous forecast of 52 million tons.  Last year they had 55.1 million tons.

In kilograms (top) and in bushels (bottom), except flour in cwt and malt

(*)NOTE:
Year ago figures reflect data reported at that time.

Write
to Kareema Clark at csstat@dowjones.com

In kilograms (top). Oils in pounds, soybeans in bushels, meal and hulls in

(*)NOTE:
Year ago figures reflect data reported at that time.