Egypt
bought 120,000 tons of vegetable oils.  USDA’s initial estimate for US crop plantings were near expectations for soybeans, corn and all-wheat.  2020-21 US commodity outlooks will be released Friday at 7:00 am CT.

THIS
IS WORTH THE TIME TO VIEW. See link below

We
attached a few area graphs and table after the text. 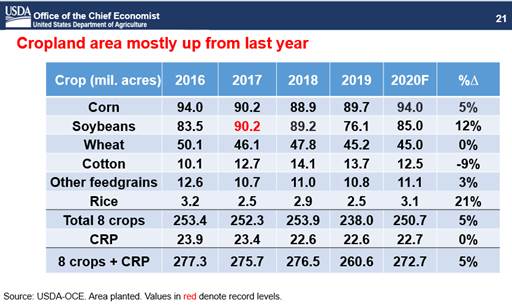 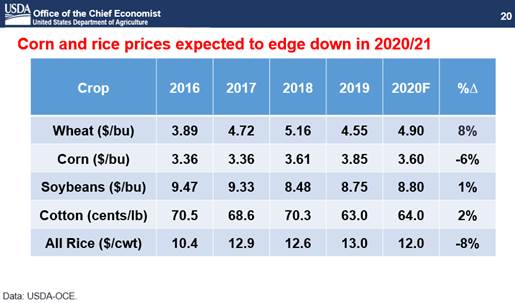 ·
Argentina will dry down over the next 5 days, but the country has plenty of soil moisture to allow conditions to remain favorable.

·
Southern Brazil will dry down over the next two weeks but there is an opportunity for some rain Feb 24-29.

·
A larger central U.S. storm is expected during mid- to late-week next week that will bring significant moisture to the upper Midwest, northern Plains and a part of the western Corn Belt. 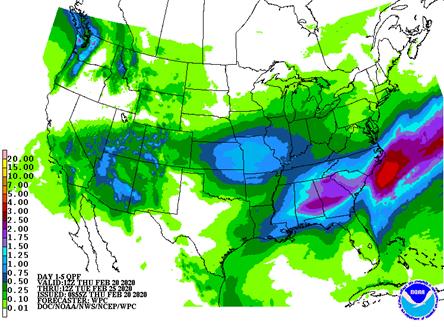 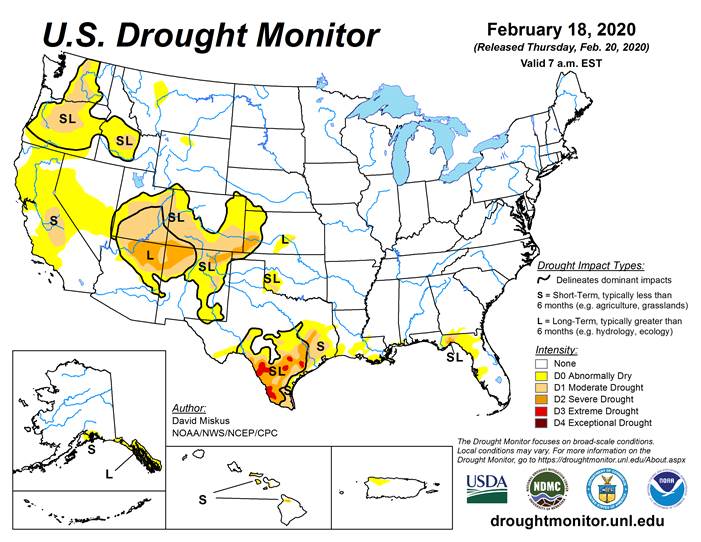 Drying
in Argentina over the next week to ten days will eventually grab the market’s attention, but today’s soil moisture is very good, and crops will coast through this first week of net drying without much stress. Timely rain will be needed again later in March
to ensure the best production potential. Most models are suggesting a drier bias for at least ten days and possibly two weeks with southern Rio Grande do Sul and Uruguay to be included.

Most
of Brazil’s crop weather still looks quite appealing with timely rain in most production areas and seasonable temperatures.

South
Africa will have its best summer grain and oilseed production year since 2017 with weather over the next two weeks maintaining that favorable outlook.

Southeast
Asia palm oil weather remains quite favorable and little change will occur through the next two weeks.

Europe
weather is mostly good and winter crops will need timely rainfall to support normal development this spring especially in Spain where the greatest drying has occurred recently.

Concern
is rising over early season corn planting delays in the U.S. Delta and interior southeastern states because of too much rain. The problem of moisture excesses will continue into March delay will be realized.

North
Africa, Spain and Portugal are drying down and significant rain will soon be needed in unirrigated areas to ensure the best production potential. Some yield cuts have already occurred in southwestern Morocco, but losses elsewhere have not been as significant.
Rain must fall soon, however, since reproduction is getting under way in North Africa and will soon occur in the Iberian Peninsula and without rain and good soil moisture yields will come crashing downward.

Limited
winterkill around the world this year has kept production potentials mostly good, although winter crops were not well established in the U.S., Southeastern Europe, southern Russia, Kazakhstan or China. With that said most of these areas have received good
amounts of moisture during the winter which should translate into improving crop development potential early in the spring so that production potentials are favorably restored.

India
is still expecting a large crop even though there is not much precipitation expected in key wheat areas for a while. Some showers will occur in eastern and far northern parts of the nation in this coming week which will support some reproduction.

Overall,
weather is still not offering a good reason for serious market price appreciation. If anything, weather conditions have left a good reason to expect crop improvements early this spring. Overall, weather today may offer a neutral to bearish bias to market mentality. 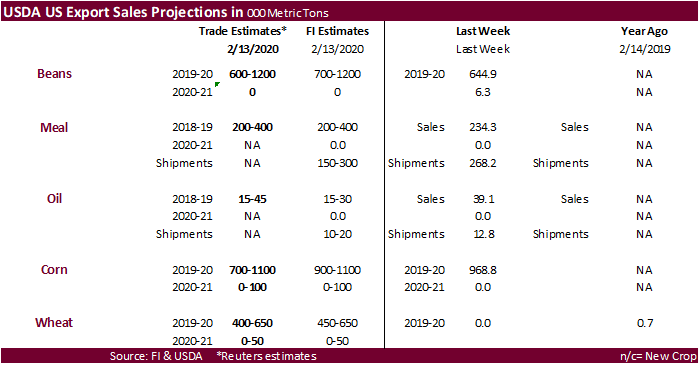 ·
March corn futures ended 2.00 cents lower and May was off 2.50 cents. The trade is waiting to see if China will buy a large amount of US grain.
Large
SA production prospects continue to hang over the market.

·
USDA’s annual outlook conference started today.  The full 2020-21 US commodity outlooks will be out on Friday. USDA estimated 2020 US corn area at 94.0 million acres, slightly above trade expectations and
3.8 million above the average for the last 5-years (90.2).

·
USDA Secretary said the trade details released today at the outlook forum did not include the Phase One trade detail.  He added they do not know a timeline when China will step up purchases of US goods.

·
A senior US Treasury official said the coronavirus outbreak will not change China’s commitments to buy US goods.

·
There was talk China picked up four cargoes of sorghum out of the US Gulf, but no corn.

·
Japan’s usage of corn in animal feed fell to 47.7% in December, compared with 48.4% in the prior year, according to the AgMin.

·
China’s sow herd increased by 1.2% in January from December. 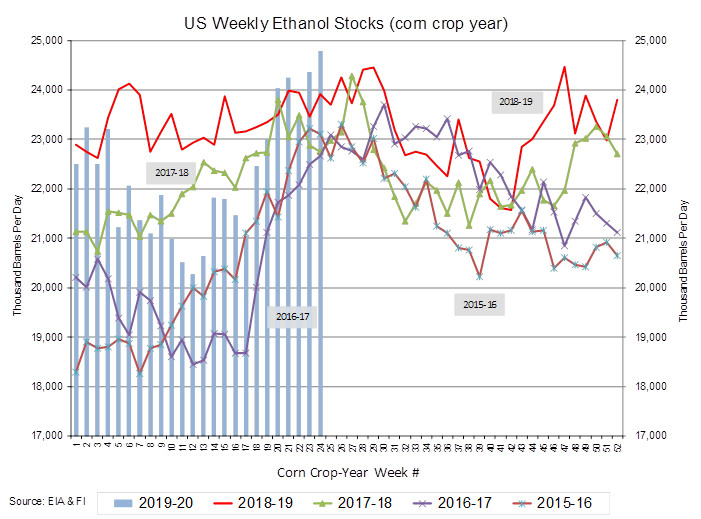 US
weekly ethanol production was up 7,000 barrels to 1.040 million. A poll called for a 16,000-barrel increase.  Ethanol production over the past 4 weeks is down on average 2,000 barrels.  Production is finally catching up to last year’s pace, on a corn crop-year
year calendar basis (Sep-Aug).  Sep 1 to date production is running 0.2% below last year’s pace, compared to 1.6 percent at the beginning of the year.  Gasoline stocks declined nearly 2 million barrels from the previous week. 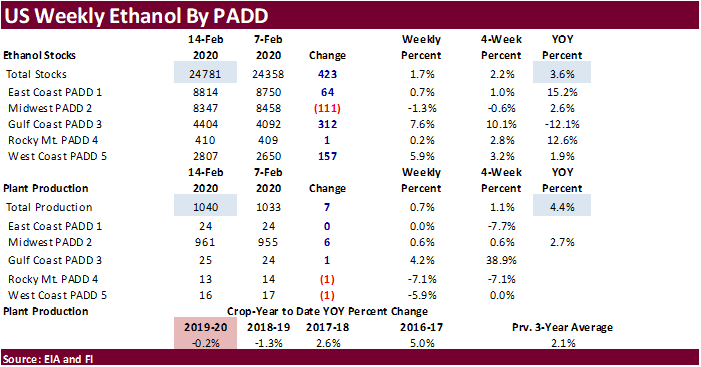 ·
Malaysia looks to fully implement B20 biodiesel by mid-2021.  About 1.06 million tons of palm oil would be used to produce enough B20 annually for the transportation sector, 1.3MMT when adding B7 for the industrial
sector.

·
US wheat ended 2.25-6.50 cents lower on lack of bullish developments and prospects for large 2020 global wheat production.  The lower trade today and yesterday for US wheat futures did attract additional global
import developments, but the US remains uncompetitive, and will contribute to little or no market share of this week’s tender announcements.

·
May Paris wheat futures were unchanged at 196.25 euros. 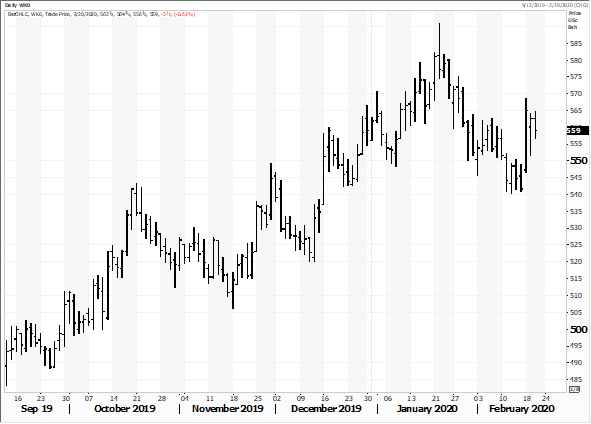