Wheat
was the leader today.  Locust swarms with a 40-mile reach (length) that have been destroying farm crops Africa could now threaten Southwest Asian countries.  Coronavirus continues to hit selected markets, such and India chicken demand and Indonesia palm export
shipments to China.  SA soybean crops are getting larger.

·
Flooding remains a serious issue across the far southern Delta and Southeast.

·
Snow and rain will develop in the southern U.S. Plains Wednesday and Thursday with accumulations of 1 to 4 inches.

·
A larger central U.S. storm is expected during mid- to late-week next week that will bring significant moisture to the upper Midwest, northern Plains and a part of the western Corn Belt.

·
Argentina’s Chaco saw flooding over the weekend where more than 14 inches fell.

·
Brazil crops will all received rain at one time or another during the next two weeks.

Not
much has changed overnight. Favorable soil moisture is present in Argentina, Brazil, South Africa, India and some eastern Australia locations which should support crop development.  There is still some concern over harvest conditions in early season soybean
areas of Goias and southwestern Minas Gerais which may lead to more delay in second season corn planting, but progress is being made every day and it looks as though the pace is not far from the five year average even though much slower than last year. Good
field working conditions have been occurring in other areas and that should minimize the amount of crop that will be later planted.

Too much rain in northeastern South Africa in the past week has resulted in some flooding. Crop damage has not been assessed, but the region impacted is a minor production region in eastern Limpopo and northeastern Mpumalanga. Other areas in South Africa have
ideal crop development conditions.

More
rain will fall this week in northern and eastern Europe and from there to Ukraine and that will improve early season crop development potentials for areas that were too dry last autumn.

China’s
winter crops are still rated favorably with a big potential for improving rapeseed conditions in the early weeks of spring after recent weeks of rain.

India’s
winter crops are still poised to perform quite favorably, despite a drier biased outlook for the next ten days.

Eastern
Australia sorghum conditions have improved, but drought remains in key production areas and much more rain will be needed before winter planting of canola begins in late April. Summer crop development has improved, but it will still be a very small crop.

Today’s weather will have a mixed influence on market mentality.

MARKET
WEATHER MENTALITY FOR WHEAT:
Many of the winter crop areas in the world that experienced poor crop establishment because of dryness last autumn have seen some timely precipitation in recent weeks. The moisture should help improve winter crop establishment prior to reproduction this spring.
There has also been very little winterkill this year and that should be supporting larger crops. With that said there may have been some damage in a few minor wheat areas in central Nebraska Thursday morning when temperatures fell near slightly below zero
Fahrenheit while snow cover was minimal. Today’s bitter cold in the Midwest occurred in mostly snow-covered areas.

The biggest dry concern today is in North Africa and in particular southwestern Morocco where durum wheat and barley production has been cut. There is potential for larger small grain production losses from North Africa if improved rainfall does not occur
soon. Spain and Portugal are also drying out but have adequate subsoil moisture for now. The outlook leaves most of these areas dry or mostly dry for the next ten days and perhaps longer.

Overall, weather today will continue to provide a mixed influence on market mentality. 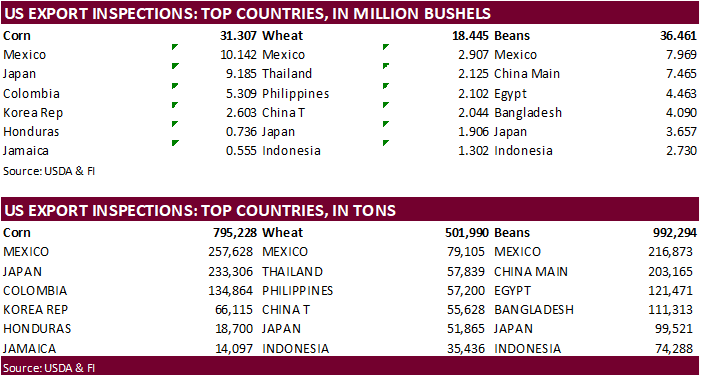 ·
(Reuters) – China will cut some pension contributions and insurance fees to help companies cope with the coronavirus, while firms in Hubei province, the epicenter of the outbreak, won’t have to pay pensions,
jobless and work-injury insurance until June.

·
March corn futures ended 5.25 cents higher in part to a strong rally in soybeans and renewed hopes China will buy US agriculture products by March 15.

·
General Administration of Customs: China removed import restrictions on U.S. poultry and poultry products that were imposed in 2013, 2014 and 2015.  (Bloomberg)

·
China warned the poultry and product industry may take a hit from coronavirus.  Poultry prices are down hard this year as demand eroded.

·
Bulgaria reported a bird flu outbreak (N5N8) at a duck farm in the southern part of the country.

·
India officials mentioned demand for chicken dropped over the past three weeks after social media reports speculated the coronavirus was thought to be spread through chickens.  Broiler chicken prices have
fallen to 35 rupees a kg from around 70 rupees in January.

·
Zimbabwe plans to import Uganda to make up for a shortfall in consumption.

·
Soybeans ended 1.0-1.75 cents lower despite a 24-cent rally in wheat. Lack of China buying and large SA production estimates along with corn/soybean spreading limited upside in soybeans.  Brazil should see
needed rain across the southern growing areas later today into Wednesday that will help reduce some areas with short topsoil moisture.  China said they will but some US agriculture products by early March.  Traders will likely believe it when they see it.
China is not completely avoiding US soybeans. The long vessel lineup in Brazil may entice China buying from the US.

·
China lifted import restriction on US poultry and poultry products. 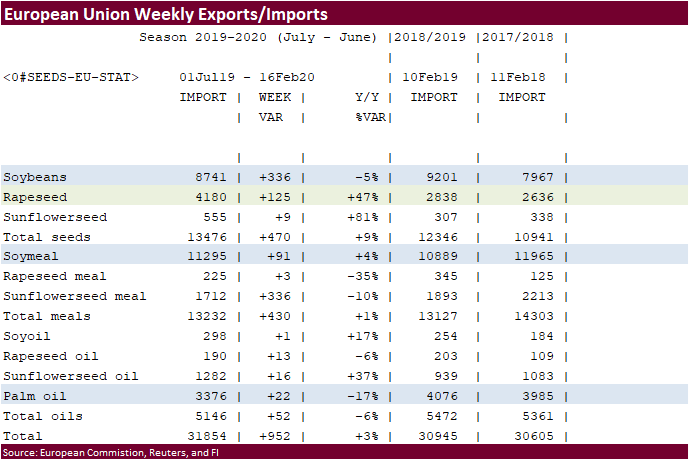 ·
Chicago wheat prices hit a one-month high on technical buying (20- and 50-day MA’s), locust problems in Africa and renewed hopes China will buy US agriculture products after announcing over the weekend they
plan to buy goods from the US by early March.  There were also several new import tenders, including two large ones of US origin.  Not all news was bullish. India estimated a record wheat production for 2019-20 which will keep their imports at zero.

·
Meanwhile, India projected a record 2019-20 wheat crop of 106.21 million tons, well above the 99-100 benchmark traders see as a break-even.  Domestic wheat consumption for India may end up near 98 million
tons in 2019-20, a record, according to USDA.  2019-20 production was estimated by USDA at 102 million tons, 4.2 million below the India government estimate.  If 106.2 million tons is realized, India could potentially export 2.0-2.5 million tons but only if
they subsidized it, which is unlikely. At most we think India will export 1 million tons, which could leave the 2019-20 carryout at around 24.2 million tons, matching the record carryout for 2012-13.

·
Attached is our updated Australia and India balance sheets.

·
Ukraine grain exports are running at 38.4 million tons, up 24.5 percent from the same period a year ago, according to the Ministry of Economic Development.  State statistical service office at the end of the
year pegged the Ukraine grain crop at 75.1 million tons.

·
APK-Inform has the Ukraine grain crop at 75.08 million tons. 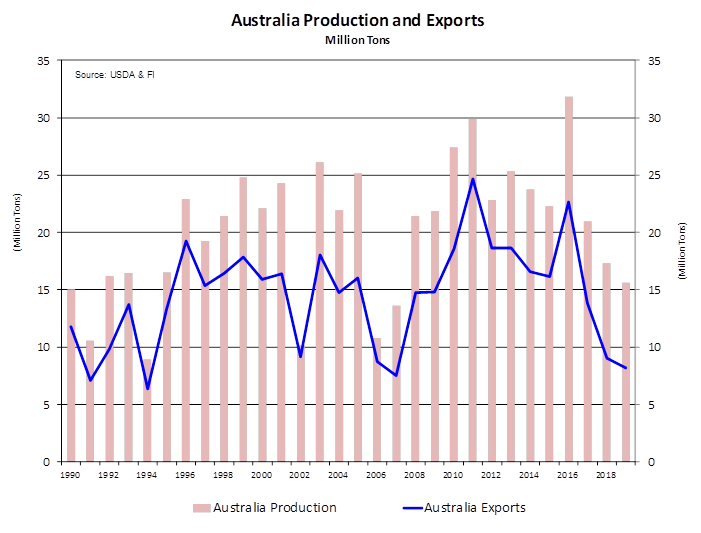 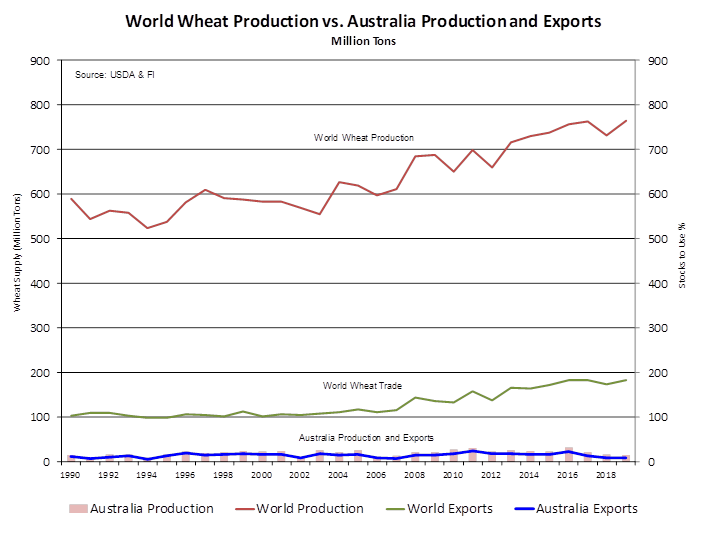 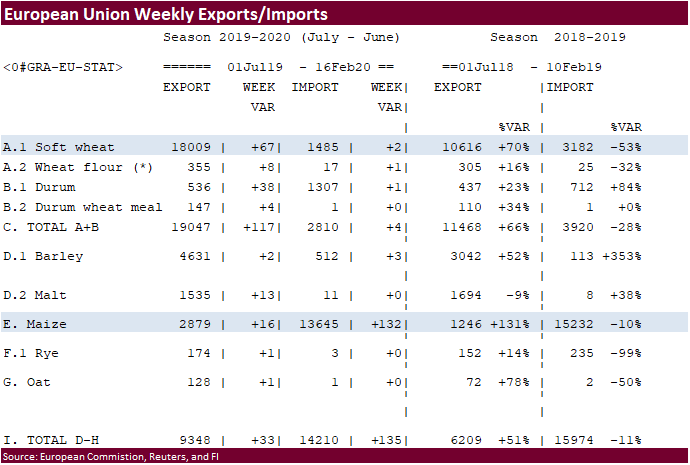