USDA
updated their February S&D’s and wheat turned out to be the most price sensitive commodity by late morning trading.  Conab Brazil soybean production fell short of expectations by 1.1MMT. China left their 2019-20 soybean and corn balance sheets unchanged from
the previous month.

Bearish
soybeans with Brazil upward revisions to production and exports weighing on prices, despite USDA increasing their outlook on US soybean exports.  Bearish corn on large South American corn output.  USDA did increase its US corn for ethanol projection but lowered
exports.  Wheat neutral.  We believe unwinding of wheat/corn spreads are pressuring wheat prices despite the 25-million-bushel reduction in USDA US ending stocks.  Fact remains US wheat stocks will remain very high relative to a ten-year average. 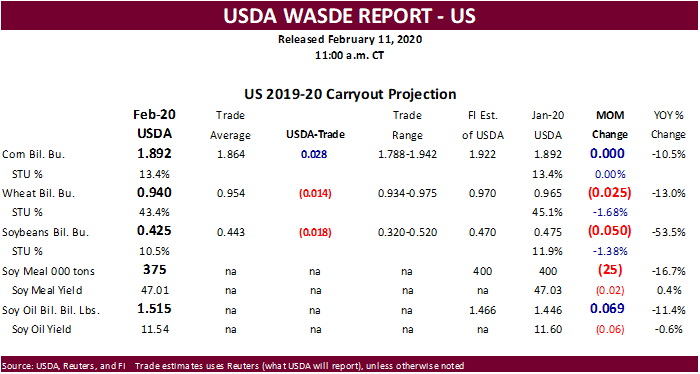 ・
2019-20 US soybean exports were lifted higher by 50 million (we were looking for 25) to 1.825 billion bushels, above 1.748 billion in 2018-19.  USDA noted “increased imports for China” – something the trade
is still looking for in large quantities. This comes after USDA raised Brazilian soybean exports by 1 million tons to 77 million tons.  All other US soybean demand components were left unchanged.

・
US corn for ethanol was taken up 50 million bushels to 5.425 billion, above 5.376 billion for 2018-19.  US corn exports were lowered 50 million bushels, a surprise in our opinion.  The large SA crops, and
strong pace of Ukraine corn exports, are expected to gain cut into the US export market program.

・
By class, USDA reduced US HSW stocks by 15 million bushels.

Not
much has changed overnight. Favorable soil moisture is present in Argentina, Brazil, South Africa, India and some eastern Australia locations which should support crop development.  There is still some concern over harvest conditions in early season soybean
areas of Brazil which may lead to more delay in second season corn planting.

More
rain will fall this week in northern and eastern Europe and from there to Ukraine and that will improve early season crop development potentials for areas that were too dry last autumn.

China’s
winter crops are still rated favorably with a big potential for improving rapeseed conditions in the early weeks of spring after recent weeks of rain.

India’s
winter crops are still poised to perform quite favorably, despite a drier biased outlook for the next ten days.

Eastern
Australia sorghum conditions have improved, but drought remains in key production areas and much more rain will be needed before winter planting of canola begins in late April. Summer crop development has improved, but it will still be a very small crop.

South
Africa crop conditions are still rated quite favorably with little change likely, despite some net drying for a while.

Today’s
weather will have a mixed influence on market mentality.

Many
of the winter crop areas in the world that experienced poor crop establishment because of dryness last autumn have seen some timely precipitation in recent weeks. The moisture should help improve winter crop establishment prior to reproduction this spring.
There has also been very little winterkill this year and that should be supporting larger crops.

The
biggest dry concern today is in North Africa and in particular southwestern Morocco where durum wheat and barley production has been cut. There is potential for larger small grain losses from North Africa if improved rainfall does not occur soon. Spain and
Portugal are also drying out but have adequate subsoil moisture for now.

Overall, despite market performance of late, there is still no good weather related reason for futures price appreciation and some caution is warranted there.

Today’s
weather will maintain a low impact on market mentality. 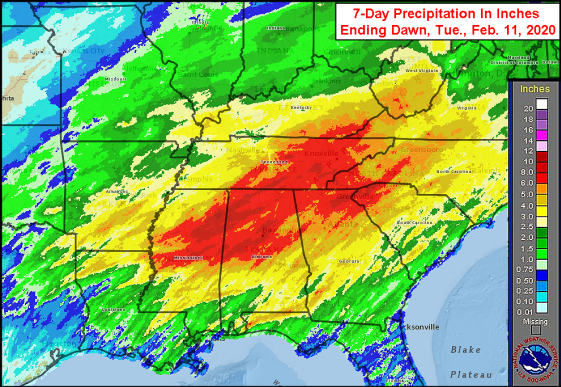 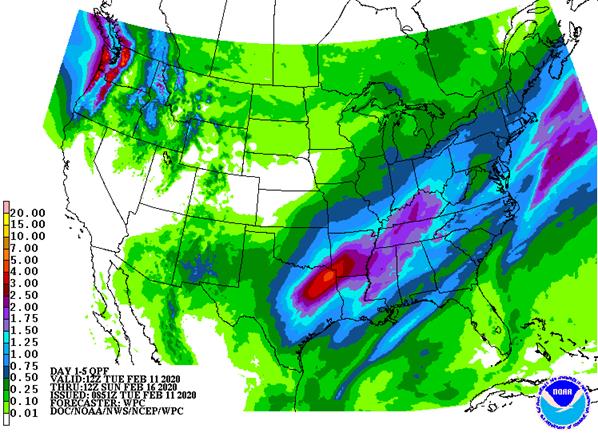 China
CASDE:  They
left unchanged their 2019-20 balance sheets for major ag commodities but did mention coronavirus did have a short-term impact on crop supplies.  Corn sales had been significantly slower, according to the Ministry of Agriculture and Rural Affairs.  Edible oils
production was adjusted for 2018-19, down 3.5 million tons to 21.92 million tons. 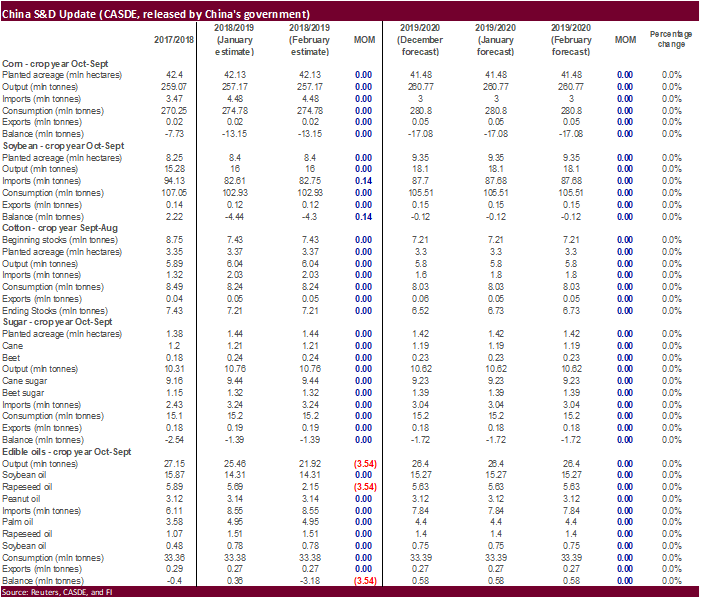 ・
China left their 2019-20 soybean and corn balance sheets unchanged from the previous month.

・
Conab estimated Brazil’s corn production 1.8 million tons higher from last month, but 0.3MMT below a Bloomberg trade guess.  They are at 100.5 million tons versus 100.0 million tons year ago.

・
Brazil internal corn prices are near a 4-year high due to strong demand by feed end users, good export demand and higher consumption for industrial use.  FAS Attaché updated their Brazil corn S&D (link below).
Earlier today USDA left their Brazil corn production estimate unchanged at 101.0 million tons but increased domestic feed use by 0.5MMT to 56.5 million, up from 55.4 million tons in 2018-19. 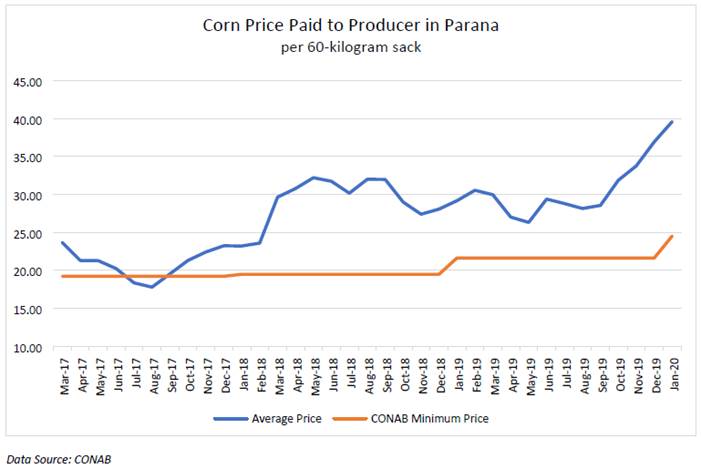 ・
Soybeans were unchanged to slightly higher on Tuesday.  The USDA report was viewed as bearish after Brazil soybean production and exports were upward revised from the previous month (see page one).  The products
traded two-sided. Palm oil futures were down 2 percent and cash slipped $14.50.

・
China left their 2019-20 soybean and corn balance sheets unchanged from the previous month.

・
China pork prices are near a record high on tight inventories.  Pork prices in January are up 116% from a year earlier, according to data from the National Bureau of Statistics.

・
US wheat futures led the price volatility for the US agriculture commodities, trending lower on lack of US export participation in this week’s global sales highlights.  USDA’s S&D update was viewed neutral
for fundamentals (see page one).

・
Algeria, Egypt, and Jordan are/were in for wheat and there is talk Saudi Arabia might be in soon for wheat.  Lack of offers for US wheat in (most) these import tenders was seen negative for US wheat futures.
Paris wheat declined after no French offers showed up in Egypt’s GASC import tender. Egypt ended up buying 360,000 tons of Romanian and Russian wheat for March 21-31 shipment.

・
Southeast Queensland and northeastern New South Wales in Australia are expected to get additional rain this week after seeing rain last week.

・
Results awaited: Mauritius has delayed the deadline for to buy up to 6,000 tons of long grain white rice to Feb. 10, for delivery between May 1 and July 31.