Weather continues supportive of crops in most of Brazil and Argentina. There is some concern over rainfall in Brazil delaying some of this year’s soybean harvest, but the bottom line should not impact production for most areas. A few areas in Argentina may become too wet in the next few days after some heavy rain already occurred overnight.

Australia’s summer crops will get some additional rainfall in this coming week and India crops will remain in good shape. China still has potential for improving rapeseed production potential once spring arrives due to recent precipitation and improving soil moisture in parts of southeastern Europe into Kazakhstan may do to the same for those areas in the spring.

Southeast Asia weather will trend a little wetter in the coming week restoring favorable soil moisture to many Indonesian and Malaysian crop areas. Rain is needed most in parts of Peninsular Malaysia.

Overall, weather today is likely to contribute a bearish bias on market mentality.

There is very little risk of crop threatening cold for small grain crops around the world. Cooling in the U.S. this week in the west-central and southwestern Plains will prove to be beneficial since recent temperatures were so very warm. No crop damage occurred in the west-central high Plains region this morning as temperatures dropped near and below zero Fahrenheit due to snow cover.

Improving precipitation in southeastern Europe and the southwestern grain areas of the Commonwealth of Independent states may improve production potentials in the spring. China’s winter crops are still expected to improve in the early spring if there are a few timely rain events as temperatures trend warmer

Rain in east-central Australia this week will be great enough to bolster topsoil moisture and possibly improve a few water reservoir levels, but much more rain will be needed before autumn planting begins in April. The recent weather trends have looked appealing with rain falling more frequently easing some of the dryness.

North Africa wheat is still a concern with southwestern Morocco production already expected to be down. Timely rain will be needed later this month and in March to support reproduction and filling throughout northern Africa. Early February will be dry and warm biased. 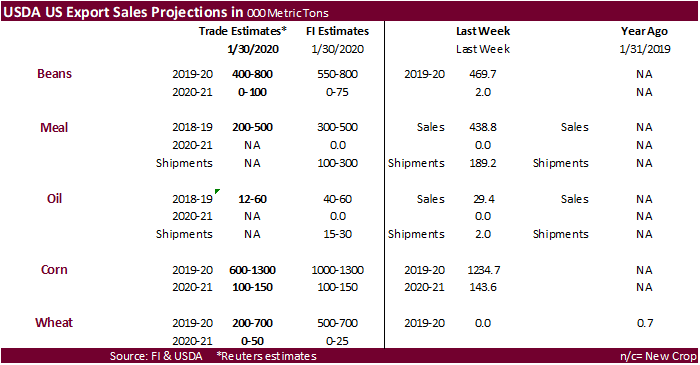 ·         WTO crude oil traded more than $1.50 higher in part to reports that researchers in China and UK made breakthroughs on inhibiting the virus.  Volatility is high and funds seem to enjoy getting in and out of this market.  The swings have been staggering.

US weekly ethanol production and stocks showed a big miss by the trade. US production was reported up 52,000 barrels to 1.081 million.  The trade was looking for unchanged.  US ethanol stocks declined by a large 770,000 barrels while the trade was looking for a 249,000 decrease (not a big miss when thinking about the recent large weekly swings).  We see this report as slightly supportive for corn.  Production last week was the third highest so far for the corn marketing year (Sep-Aug).  Stocks were third highest for the corn marketing year. 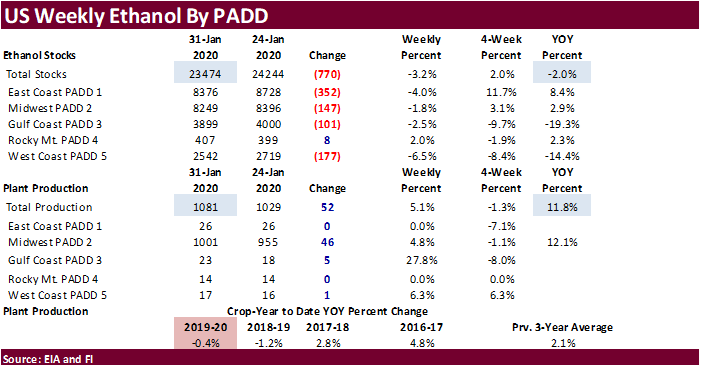 ·         Sharply higher CBOT soybean oil lifted the CBOT crush up 4.25 cents basis the May position, allowing end users to take advantage by hedging positions.  March SBO traded more than 90 points during the session.  A five percent increase in Malaysian palm oil futures and higher China vegetable oil prices spilled over into SBO futures.  Meal ended $0.80-$1.10 short ton lower.  Higher soybean oil pulled soybeans higher, but prices paired gains on lack off US sales to China.  March ended 0.50 cent higher. A large amount of crush was executed today for the March, May and July positions.  Over 42 million bushels of crush was done before 1 pm CT.  China continues to buy soybeans despite the coronavirus epidemic. We heard they bought at least 10 cargos of SA soybeans earlier this week.  One source mentioned up to at least 1 million tons was bought.  State run companies were in the mix with the buying. China is basically covered for February and nearly done for March shipment.  They have about 4-8 million tons more to buy for combined April and May shipment.   Spot Brazil soybean premiums are up 10 cents over the past day.

·         Malaysian palm oil increased 5% on trade estimates for end of January stocks to decrease 41 percent from the previous year.

·         There was not much in the way of fundamental news to justify the higher trade. Short covering was likely. 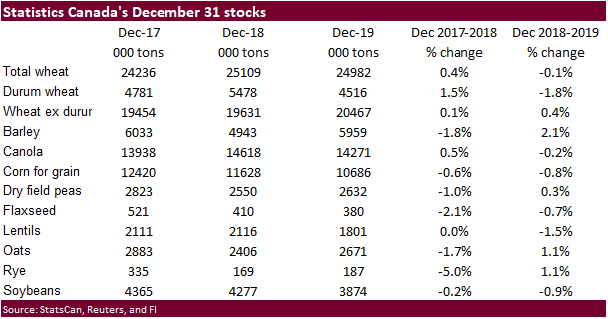