Better rainfall potentials in Argentina during the next two weeks will improve confidence in the nation’s favorable summer crop outlook. Argentina’s fair to good grain and oilseed output combined with Brazil’s huge soybean crop will likely keep a bearish bias on for those crops. South Africa weather may improve somewhat this weekend and next week to protect its production potential.

Australia’s summer crops will get some additional rainfall in this coming week and India crops will remain in good shape. China still has potential for improving rapeseed production potential once spring arrives due to recent precipitation and improving soil moisture in parts of southeastern Europe into Kazakhstan may do to the same for those areas in the spring.

Southeast Asia weather will trend a little wetter in the coming week restoring favorable soil moisture to many Indonesian and Malaysian crop areas. Rain is needed most in parts of Peninsular Malaysia.

Overall, weather today is likely to contribute a bearish bias on market mentality.

There is very little risk of crop threatening cold for small grain crops around the world. Cooling in the U.S. this week will be preceded by snow in the areas where temperatures will get coldest (the west-central high Plains) which should protect crops from damage. Periods of snow in the west-central high Plains should lead to some improving topsoil moisture for better winter crop establishment in the early days of spring.

Improving precipitation in southeastern Europe and the southwestern grain areas of the Commonwealth of Independent states may improve production potentials in the spring. China’s winter crops are still expected to improve in the early spring if there are a few timely rain events as temperatures trend warmer

Rain in east-central Australia this week will be great enough to bolster topsoil moisture and possibly improve a few water reservoir levels, but much more rain will be needed before autumn planting begins in April. The recent weather trends have looked appealing with rain falling more frequently easing some of the dryness.

North Africa wheat is still a concern with southwestern Morocco production already expected to be down. Timely rain will be needed later this month and in March to support reproduction and filling. Early February will be dry and warm biased.

・         CBOT soybeans and soybean oil rebound with SBO the leader. The March soybean oil contract held a 29.83 support level on Monday, and traders found this as a buying opportunity.  March soybean oil ended up 44 points.  March soybeans paired much of its gains to settle 2.50 cents higher and meal ended down $1.30.  Spreads were active (rolling).  Many outside related markets traded higher, but some key commodities gave up big gains by the time the CBOT ag markets closed.  WTI crude oil was up around $1.25 this morning but nearly paired all of its gains by 1 pm CT.  US equities were up sharply and lent strength.

・         A White House adviser said the China coronavirus would delays a surge in US exports to China expected from the Phase 1 trade deal.

・         JCI reported China’s soybean crush is running at about half of where it should be around this time of year after local governments extended holidays to prevent the spread of coronavirus.

・         Wilmer said some plants already resumed crushings, and other plants will be back online later this week or early next week.

・         Bloomberg reported logistical constraints at some Chinese ports (Zhoushan and Shanghai) are holding up agriculture goods such as oilseeds and vegoils.  Coronavirus is to blame.

・         Earlier PNW offers for soybeans were up 2 cents. We heard a rumor China was asking around for April and May.  No trades were confirmed as of midday.

・         Reportedly the US Department of Commerce said they will make no changes to the current anti-dumping duties on biodiesel imports from Argentina.  This is response to a September inquiry from the US Court of International Trade. https://www.commerce.gov/tags/argentina

・         The harvest pace in Brazil will be slow this week as rain will fall across several parts of the major growing regions.  AgRural reported 9 percent of the soybean crop had been harvested, up from 4% last week and compares to 19% last year but in line with the 5-year average.

・         With a large soybean crop expected for Brazil, followed by a hefty second corn crop, traders should keep in mind internal Brazilian transportation costs have fallen from December by a larger than average seasonal drop for this time of year.  And with BR-163 now paved completely (Mato Grosso to northern ports), look for freight costs to be lower from 2019 as drivers spend less time on the road.  Brazil soybeans are expected to remain competitive with the US over the next several months.

・         President Trump plans to travel to India February 23 and 26 to solidify a trade deal between both countries, on selected sectors including steal, agriculture, and auto components.

・         Indonesia plans to stop food and beverage imports from China to protect itself from the coronavirus.  This seems a little extreme, in our opinion.

・         Malaysia issued a statement that the cut back on palm oil buying from India is temporary. They also said the implementation of B20 starting this month will keep CPO prices at high levels. Recently India raised their crude palm import tax to 44 percent from 37.5 percent.

・         US wheat futures saw a follow through rally from late Monday trading with technical buying a feature.  But prices were unable to hold intraday highs on lackluster US demand. Chicago March finished up 1.75, KC March up 0.50, and MN March fell 0.75 cent.

・         Texas reported 30 percent of the winter wheat crop was in good and excellent condition.

・         Russia will see a cold spell this work week and lack of snow coverage in some areas are creating concerns over winterkill.  It should start today and spread south throughout the week. 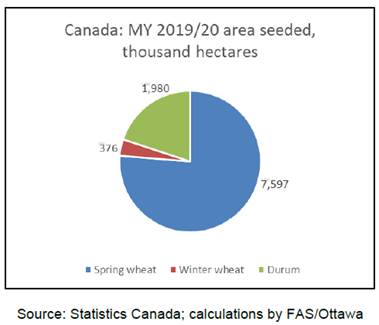