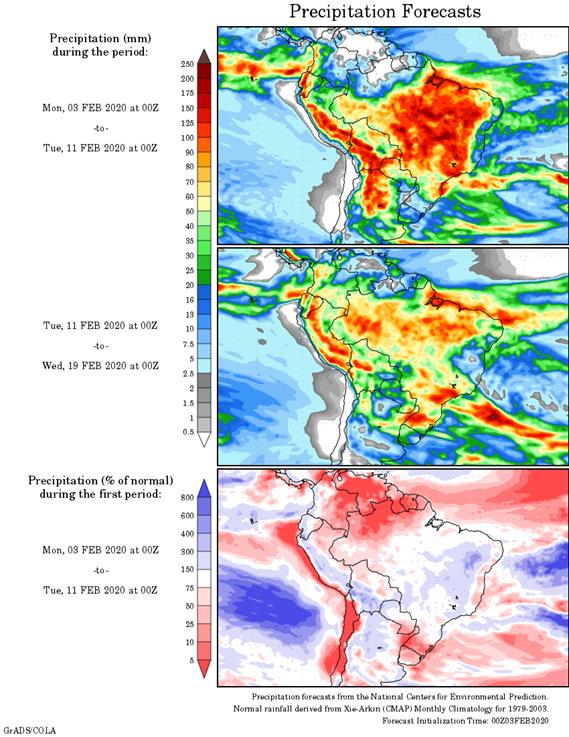 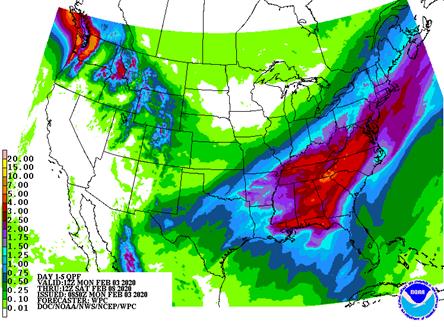 Better
rainfall potentials in Argentina during the next two weeks will improve confidence in the nation’s favorable summer crop outlook. Argentina’s fair to good grain and oilseed output combined with Brazil’s huge soybean crop will likely keep a bearish bias on
for those crops. South Africa weather may improve somewhat this weekend and next week to protect its production potential.

Australia’s
summer crops will get some additional rainfall in this coming week and India crops will remain in good shape. China still has potential for improving rapeseed production potential once spring arrives due to recent precipitation and improving soil moisture
in parts of southeastern Europe into Kazakhstan may do to the same for those areas in the spring.

Southeast
Asia weather will trend a little wetter in the coming week restoring favorable soil moisture to many Indonesian and Malaysian crop areas. Rain is needed most in parts of Peninsular Malaysia.

Overall,
weather today is likely to contribute a bearish bias on market mentality.

There
is very little risk of crop threatening cold for small grain crops around the world. Cooling in the U.S. this week will be preceded by snow in the areas where temperatures will get coldest (the west-central high Plains) which should protect crops from damage.
Periods of snow in the west-central high Plains should lead to some improving topsoil moisture for better winter crop establishment in the early days of spring.

Improving
precipitation in southeastern Europe and the southwestern grain areas of the Commonwealth of Independent states may improve production potentials in the spring. China’s winter crops are still expected to improve in the early spring if there are a few timely
rain events as temperatures trend warmer

Rain
in east-central Australia this week will be great enough to bolster topsoil moisture and possibly improve a few water reservoir levels, but much more rain will be needed before autumn planting begins in April. The recent weather trends have looked appealing
with rain falling more frequently easing some of the dryness.

North
Africa wheat is still a concern with southwestern Morocco production already expected to be down. Timely rain will be needed later this month and in March to support reproduction and filling. Early February will be dry and warm biased.

Combined
wheat, soybean, corn and sorghum export inspections have been running below this time last year for four consecutive weeks. 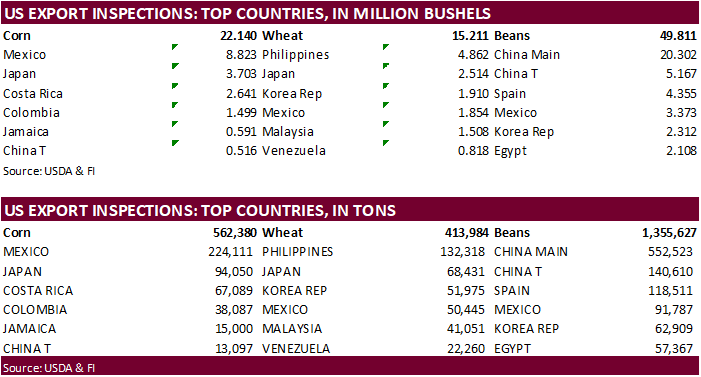 ·
China’s central bank lowered the interest rates on reverse repurchase agreements by 10 basis points to 2.40% and cut the 14-day tenor to 2.55% from 2.65% previously.

·
March corn futures traded lower as coronavirus continues to spread. The contract settled 2.50 cents lower at $3.7875.  More than 360 deaths from the virus have been reported.

·
Lower futures early this week could attract additional global export interest, which may limit downside movement in prices over the next few days.

·
US hog futures were down about 0.8% around noon CT.  China plans to release frozen pork from state reserves “whenever necessary” due to the virus outbreak.  China also announced they plan to buy more meat
from the international market.

Illinois
River lock closure update:
Grain handlers, exporters, feed users, and Chicago Platts spread traders need to monitor forward ECB cash corn prices.  And a handful of ethanol plants located near the Illinois River may feel some pain this summer as the U.S. Army Corps of Engineers released
an updated schedule for “short closure” lock repairs.  Engineers will have to drain selected channel locks, making grain barges impassible for about 60 days, at least 3 of the 5 scheduled for summer 2020 repair, depending on water levels. This may become a
nightmare for several ECB ethanol plants.  Ethanol plants stocking up on corn ahead of the closures may become a reality.  Downtime is another option.  Keep an eye on CBOT May corn deliveries. If the spreads are in good shape, heavy deliveries could be triggered,
indicating the handful of ethanol plants located on or near the river, and other grain end users are stockpiling.  Also done discount large swings in corn basis and barge freight rates located between Chicago and Memphis-Cairo, from now until end of September.
Corn
shipments up through Canada could increase if Chicago basis weaken to an attractive level.  So far, we have not seen any major divergence in basis. Peoria corn basis for spot was last 6 over the March, and forward April position was 3 over the May.  Two locks
along the Illinois River are scheduled for repair in summer 2023.  See link below for reference.
https://www.mvr.usace.army.mil/Missions/Navigation/Navigation-Status/

Corn
Grind. USDA
NASS reported the December corn for ethanol use at 479 million bushels, 4 million above a Bloomberg trade estimate, 23 million above the 457 million in November and 18 million above 462 million in December 2018.  Sorghum use was 9.5 million bu.  DDGS production
of 1.908 million short tons hit its highest level since August but was below 1.924 million produced in December 2018.  The higher corn use and lower DDGS suggests poor quality corn could have impacted DDGS minimum specifications for use.

·
CBOT soybeans
rallied after the open on signs of improving US soybean demand but paired some of the gains after news broke that Chinese officials hope the U.S. will agree on flexibility for purchase commitments from the phase-one trade deal.  It hasn’t been 30 days since
the deal was signed January 15 and now traders again have to weigh in agriculture trade concerns on top of coronavirus concerns.  This comes after China announced they plan to inject $173 billion into their economy. Early Monday they also lowered the interest
rates on reverse repurchase agreements by 10 basis points to 2.40% and cut the 14-day tenor to 2.55% from 2.65% previously. USDA export inspections showed China took just over 550,000 tons of soybeans.  The market traded two-sided by mid-morning but rallied
to close 4 cents higher.

·
Soybean meal saw weakness on product spreading. Soybean oil traded higher despite weakness in China vegetable oils after traders returned from holiday.  The Dalian was down 426 yuan in palm and 434 yuan in
soybean oil.

·
Large SA soybean production prospects may limit gains in soybeans this week, if any, but don’t discount a dead cat bounce as prices appear to be technically oversold.

·
The US$ was higher and the lower. The Brazilian Real was higher.

·
The European Union granted import licenses for 149,000 tons of soybean imports, bringing cumulative 2019-20 soybean imports commitments to 8.07 MMT, down 4 percent from what was committed at this time last
year.  Imports of rapeseed are running at 4.04 million tons, up 51 percent from the same period a year ago.

U.S.
soyoil stocks at the end of December increased from the previous month to 2.094 billion pounds (9 lbs above trade guess) from 1.880 billion lbs at the end of November and compares to 1.946 billion pounds at the end of December 2018.  It’s the largest end-of-month
supply since last August. Bloomberg had the average trade estimate at 2.085 billion while Reuters was at 2.128 (43 million difference).  The wide variance in the average trade estimate reflected the large miss in the Jan 15 NOPA report.  NOPA reported end
of December soybean oil stocks at 1.757 billion pounds, 250 million above the average trade guess. That miss in NOPA SBO stocks was tough to explain. In mid-January some speculated a large amount of soybean oil was destined to the Gulf for export. NOPA represents
about 95 percent of the US crush industry. 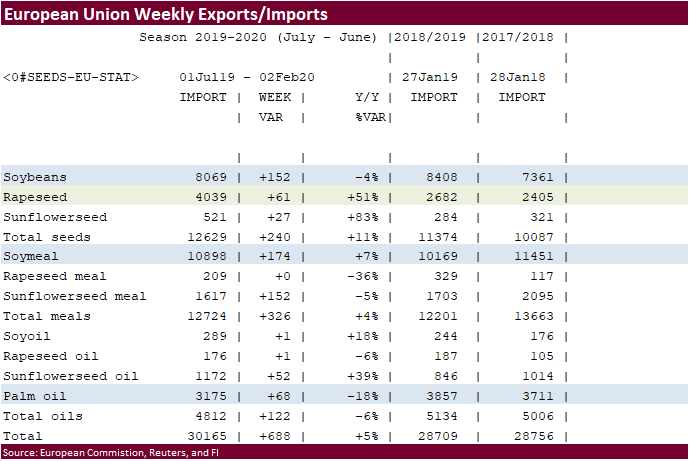 Paraguay.
Last
week a couple analysts upward revised their Paraguay soybean crop. Timely rain fell in mid-January to benefit the crop, but total precipitation over the last 90 days remains below average.  USDA currently projects the Paraguay soybean crop at 10.2 million
tons, up from 8.850 million tons in 2018-19 and compares to 10.478 million tons in 2017-18.  We are going to maintain our 10.0 million ton estimate for now. 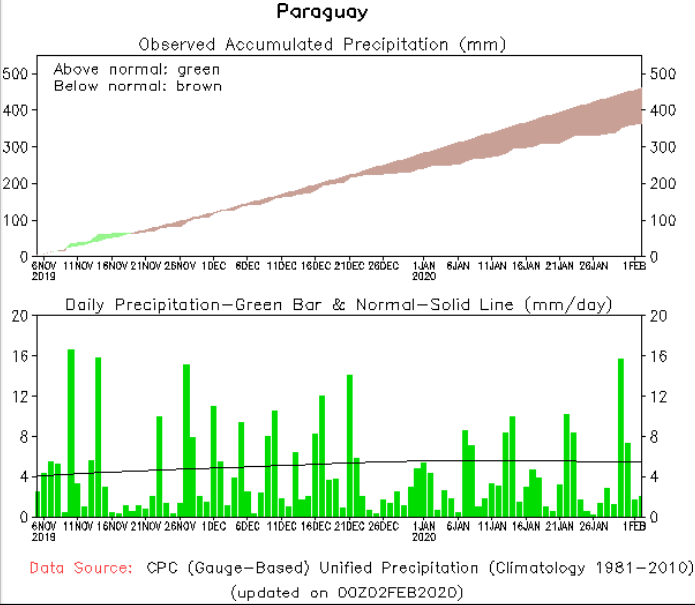 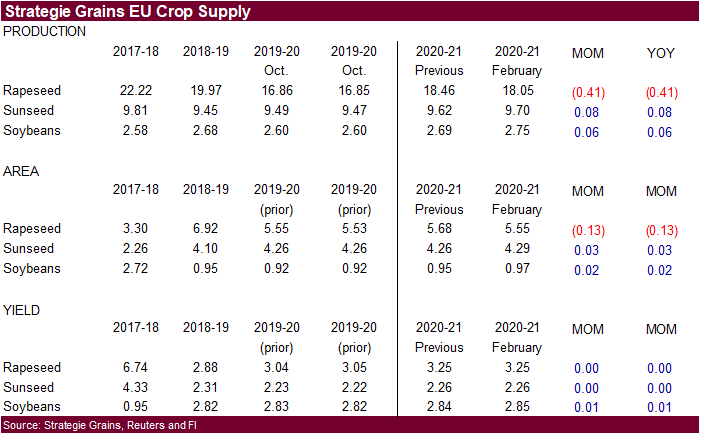 ·
Chicago wheat traded much of the day lower but paired most losses. Lack of daily US wheat export developments and China demand concerns pressured prices early.  USDA US export inspections were ok.

·
Russia will see a cold spell this work week and lack of snow coverage in some areas are creating concerns over winterkill.

·
The European Union granted export licenses for 180,000 tons of soft wheat exports, bringing cumulative 2019-20 soft wheat export commitments to 16.355 MMT, up from 9.888 million tons committed at this time
last year, a 65 percent increase.  Imports are down 52 percent from year ago at 3.014 million tons. 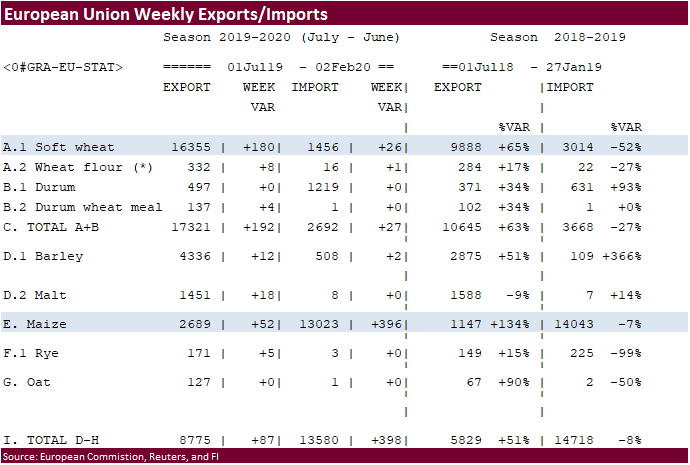