Month
to date: (FI
price performance can be found after the text) 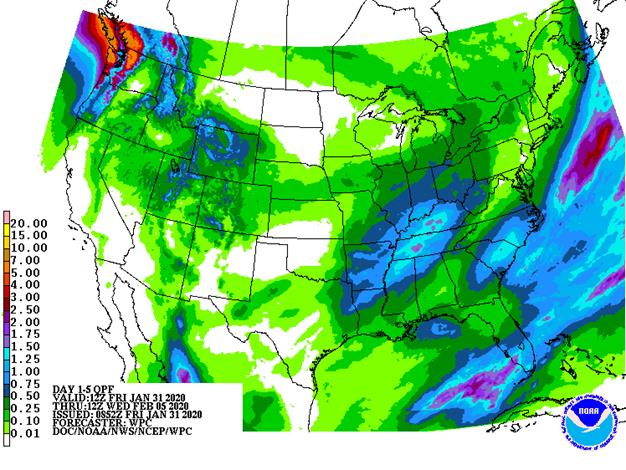 South
America weather still looks mostly good, although a close watch on the rain distribution is warranted in Argentina and far southern Brazil during the next few weeks. Recent forecast model runs have been promoting timely rainfall for these areas, but if precipitation
is missed there could be some greater concern over production potential. For now Brazil is still on target for a huge soybean crop and good early corn crop. Argentina’s corn and soybeans will produce favorably, although not necessarily ideally. Some production
cut has already occurred to early season corn and sunseed in parts of Argentina due to spring dryness.

Weather in eastern Australia improved briefly recently due to rain and some additional precipitation is forthcoming this weekend into next week. South Africa will dry down for a while this week raising some potential for mild crop stress especially in western
production areas.

Southeast Asia rainfall will be well mixed and mostly supportive of palm oil development. Rain in China and India will be typical of this time of year with winter crops in China poised for improvement as spring approaches because of recent past precipitation.

Southeastern Europe remains too dry, but there is potential for some rain and mountain snow this week from there into Kazakhstan possibly easing long term dryness in Romania, the lower Danube River Basin and parts of Ukraine. A moisture boost is needed by
spring to support planting and early season winter rapeseed development.

There
is still no risk of winterkill around the world for the next couple of weeks. That will leave winter crop conditions mostly unchanged. China crops will improve in the spring because of recent precipitation. India’s crops are still expected to yield extremely
well.

There
is still some concern over Morocco weather and the lack of rain in the southwest may harm production. A few other areas in northern Africa will also need some timely rain in February to protect production potentials.

Middle
East wheat conditions are rated favorably, but would benefit from some greater rain. Southeastern Europe, Ukraine, southern Russia and Kazakhstan may get some needed precipitation in the next week to improve soil moisture for spring crop development. Warm
weather will continue to minimize the risk of winterkill and some areas may become snow free.

U.S.
crops are not likely to experience much change in the next two weeks and the same is true for southeastern Canada. With that said some unusually warm weather this weekend will be followed by colder conditions next week, but no winterkill is presently expected.
Winter hardiness is weakening in the U.S. southern Plains.

Overall,
weather today will have a neutral bias on market mentality.

·
No major surprises for the week ending January 28.

·
Traders were more long in corn, soybeans, meal and oil than expected.

·
Money managers added 38,300 net long contracts in corn. Keep in mind the week change for corn ending Jan 28 was down only 2.5 cents.

·
Money managers sold a good amount of soybeans, so unwinding of soybean/corn spreads could have been a feature.

·
March corn traded much of the day lower as traders study the global economic impact of the coronavirus but rallied to close 1.75 cents higher on late technical buying and spreading against soybeans & wheat.
US corn is the cheapest in the world and South Korean buyers have been taking advantage of the price dip.

·
The World Health Organization declared a global health emergency. As of Friday morning, the death toll was up to 213 in China, while confirmed cases jumped to 9,692.

US
ethanol production in November was 31.358 million barrels, slightly below expectations.  We left our 2019-20 US corn for ethanol usage unchanged at 5.400 billion bushels, 25 million above USDA.

·
South American soybean crop prospects are large.  This week we saw selected upward revisions to the Argentine and Paraguayan crops.

·
Global economic worries continue to weigh on the global oilseed markets as many China businesses may stay closed post New Year holiday for all of next week.  We are hearing China is not offloading agriculture
exports because of the risk on spreading the coronavirus.

·
Chinese purchases of American soybeans increased to 3.1 million tons in December (well up from year ago), compared with 2.6 million tons the previous month.

·
Malaysian palm oil exports fell 7.9 percent to 1.220 million tons from the previous month, according to SGS.

·
Malaysian palm markets:
Malaysia
failed to recoup losses, with January closing down 15%, the most since 2012. 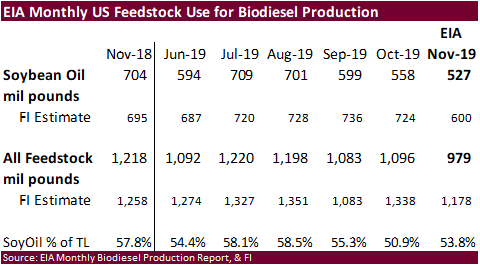 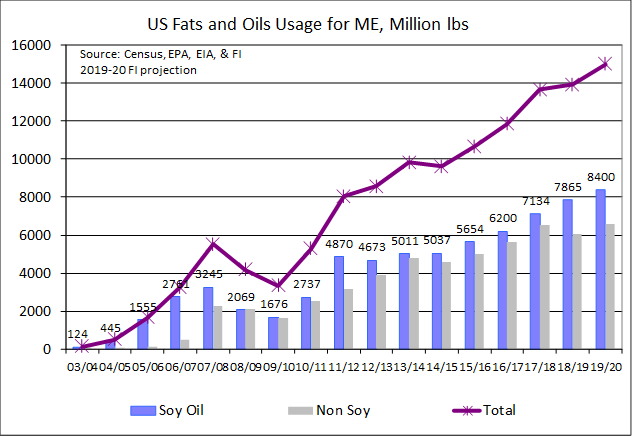 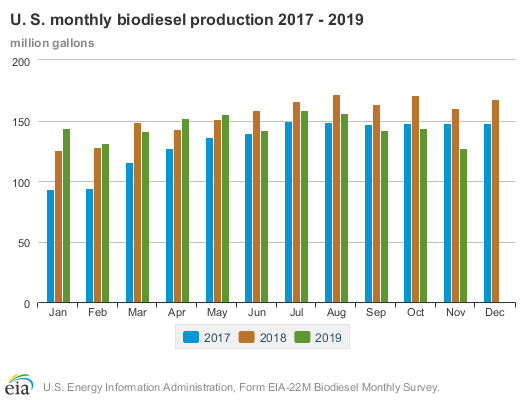 ·
Australia 2019-20 wheat production was estimated at a low 15 million tons by FAS.  This would be down from 17.3 million tons year earlier.
https://apps.fas.usda.gov/newgainapi/api/Report/DownloadReportByFileName?fileName=Grain%20and%20Feed%20Update_Canberra_Australia_01-16-2020