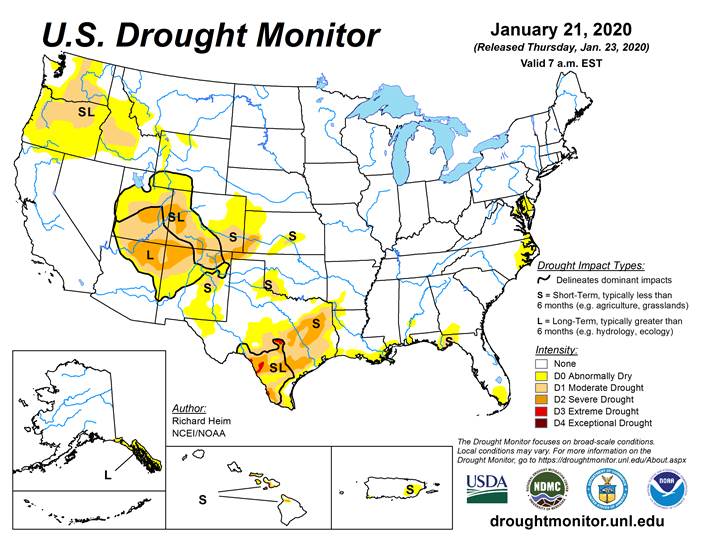 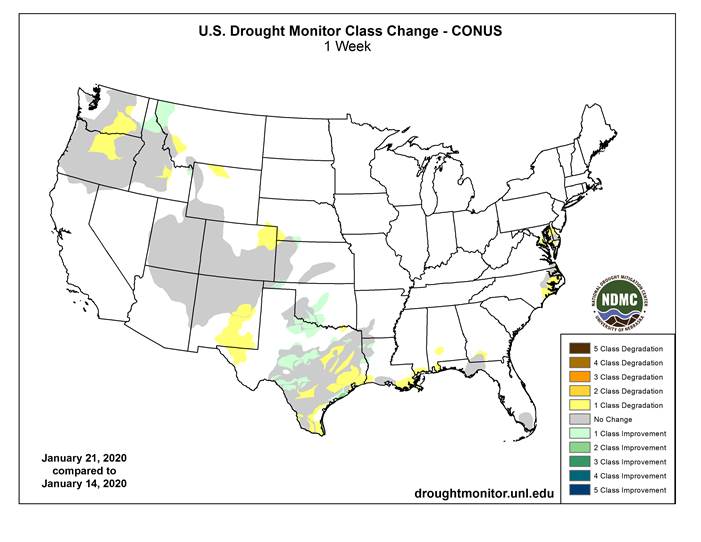 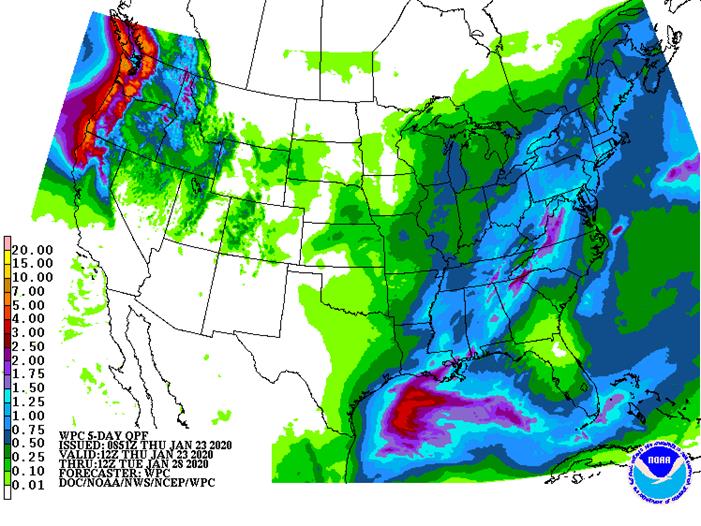 Worry in the market place over wet weather in parts of northern Brazil and drying in southern Brazil as well as Argentina will continue to direct the market from a weather perspective for a while. However, some caution is needed here because conditions in both countries have been and still are extremely good. A week to ten days of these anomalies may not hinder crops as much as some folks want to believe and some caution is needed. The only states in Brazil that will become too wet are Goias and Minas Gerais and that will only be the case for a week to maybe ten days. Most of the areas expected to dry out for a while will see subsoil moisture carry crops for a while limiting the period in which crop stress is expected to be a threat to production. The key to production will be what happens late in the first week of February and on into the second week – if drying prevails there will be a threat to some crop yields.

In the meantime, South Africa rainfall will be erratic for a while with eastern areas more favored for rain than the west. A greater need for moisture will soon evolve in the western production areas.

Recent rain in eastern Australia improved some of the irrigated summer crops and more rain is expected in eastern and northern Queensland and northeastern New South Wales through Saturday before the region dries out and heats up again.

India’s winter oilseed crop is suspected of being in better than usual condition and China will see improved establishment in the spring when seasonal warming occurs. China’s winter crops were not well established last autumn, but have experienced improved precipitation in recent weeks that will be of use to establishment when it warms up once again.

Not much has changed relative to that of Wednesday.

Little to no winterkill has likely occurred in key wheat production areas in the Northern Hemisphere so far this winter, although a few crops in Montana might have been negatively impacted by recent cold weather.

In the meantime, India is poised to have a high yielding crop this year. Crops in the Middle East are expected to yield relatively well and China weather has improved in recent weeks and that should translate into better crop establishment during the spring. Hebei, China still needs moisture.

Southeastern Europe crops are not as well established as they should be, but winter weather has been mild leaving very little threat of crop damage thus far. Much of Russia has snow on the ground, but temperatures are well above average and expected to stay warm minimizing the threat of winterkill. Some snowmelt is expected in Russia, however.

Overall, weather today should have a neutral to slightly bearish bias on market mentality. 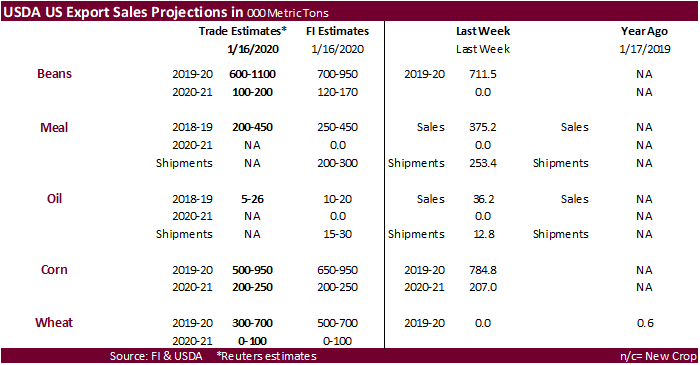 ·         Corn futures trended lower early then rallied on tightening supplies. Nearby futures broke above a short-term trading range, and March corn traded at its highest level since November.  At 9:35 am CT, 10,000 CH stopped out $3.92-$9.93.  March/May spread firmed on lack of US producer selling.  Corn basis at Burns Harbor, IN increased 13 cents to 5 under.  Basis was up 3 cents for Cincinnati, OH and increased 1-2 cents at two IL river terminal locations.  South American supplies for old crop are tightening and end users are turning to the US to source corn through May.  Under the 24-hour announcement system, USDA reported a total of 284,948 tons of corn was sold to Guatemala and Unknown.

·         The weekly EIA ethanol production and stocks report was perceived to be bearish.

·         Meanwhile the surplus of supertankers in the Middle East during the next month is set to increase to more than double the usual level for this time of year, according to a weekly Bloomberg survey.

·         The BA Grains Exchange reported Argentina corn plantings at 95 percent, up from 91 percent previous week and compares to 93 percent last year and 94 average.

·         China imported 730,000 tons of corn in December but much of that could have been of Ukraine origin. But US demand may increase due short exportable supplies out of SA and eventually Ukraine.  Japan may continue to buy from the US PNW before switching their origin in July and August.

Weekly US ethanol production declined by 46,000 barrels to 1.049 million, largest weekly decrease since September 20.  US weekly stocks increased by a large 1.025 million barrels to 24.031 million, largest inventory since July 26, 2018.  Four weeks ago, stocks were at 21.034 million.  September 2018 to date US ethanol production is running 1.1 percent below the same period a year ago. 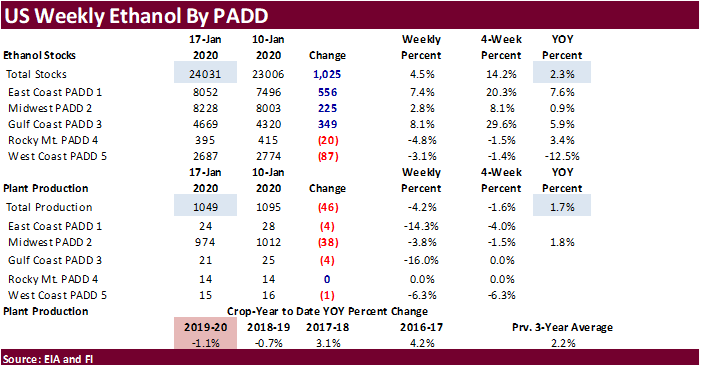 ·         CBOT soybeans fell for the fifth consecutive session, ending 4.25 cents lower basis the March and May.  Lack of bullish news and lower lead by outside markets pressured soybeans.

·         Continued fears of the spreading of the Coronavirus in China pressured several commodity markets today.  China restricted travel to five cities ahead of the lunar new year holiday.  600+ have been infected and at least 18 people have passed away.

·         The BA Grains Exchange reported Argentina soybean plantings at 98 percent, up from 95 percent previous week and compares to 99 percent last year and 99 average.

·         Malaysia is trying to smooth out trade tensions with India by committing to buy more Indian sugar.  A large Malaysian sugar refiner said it will increase sugar imports from India.  MSM Malaysia Holdings Berhad plans to purchase 130,000 tons of raw sugar from India worth 200 million ringgit ($49.20 million) in the first quarter. The company bought around 88,000 tons of raw sugar from India in 2019. 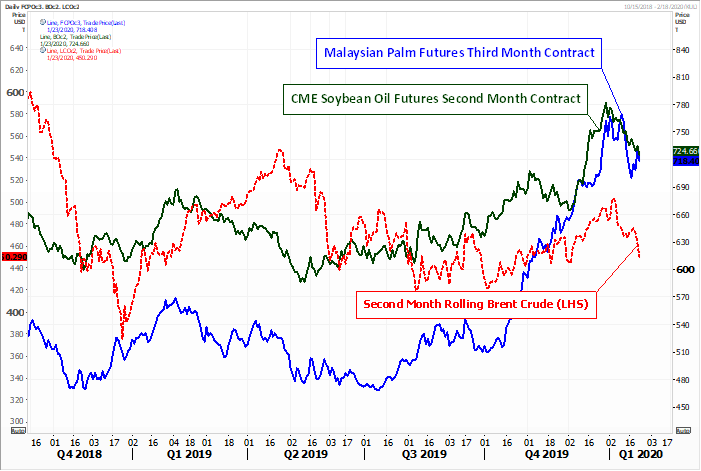 ·         Chicago wheat ended higher led by bull spreading in a quiet trade.  News was light.  KC was mostly moderately lower, and MN ended mixed.  Lack of direction was noted.  CBOT Chicago wheat volatility is at its highest level since mid-December.

·         Europe remains dry across parts of northern France into Germany and Poland.

·         Some of the winter wheat across TX and Kansas is slow to develop but in better shape than other recent years.  But we are hearing some wheat across western 1/3 of Kansas south to Amarillo is in poor to worse shape.  There is still plenty of time for the crop to develop and improve but something to monitor when USDA issues state stories a week from Monday (crop condition updates).

·         The Chicago March to May wheat inverse widened to 1.5 cents today.   A reason for this is that spot global demand for wheat has been very robust in recent weeks with notable purchases by Egypt, Tunisia, and Algeria. The funds have been getting ahead of the general rise in world cash prices, and the French rail/port strike also supported this spread after Paris wheat traded to nearly a one year high.  The physical forward curves (Black Sea, EU, Arg., US) for the March/May don’t suggest an inverse for March/May.  With this in mind, Chicago futures could trade back to May premium before first notice day, but wheat may need to see several legs down for this to happen.

·         Japan’s Ministry of Agriculture bought 108,296 tons of food-quality wheat on Thursday from the United States and Canada. Original details as follows.