Mid-January update: Climate Prediction Center/NCEP/NWS and the International Research Institute for Climate and Society mentioned there is no active ENSO for the Northern Hemisphere spring 2020 (~60% chance), continuing through summer 2020 (~50% chance). 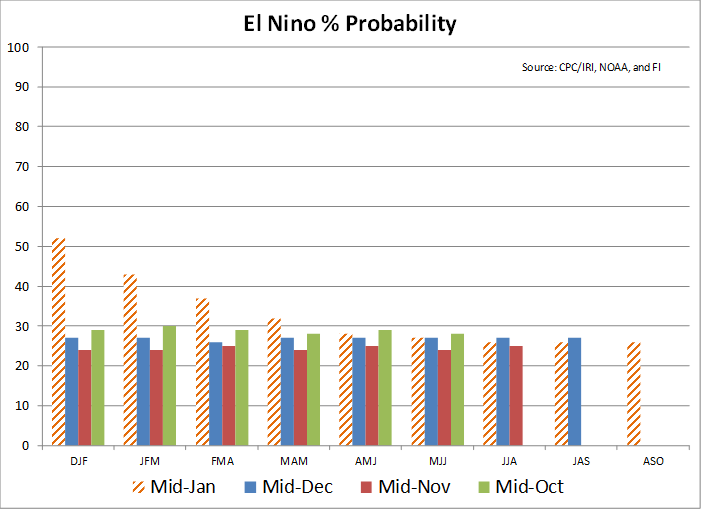 In the meantime, South Africa rainfall will be erratic for a while with eastern areas more favored for rain than the west. A greater need for moisture will soon evolve in the western production areas.

Recent rain in eastern Australia improved some of the irrigated summer crops and more rain is expected in eastern and northern Queensland and northeastern New South Wales through Saturday before the region dries out and heats up again.

India’s winter oilseed crop is suspected of being in better than usual condition and China will see improved establishment in the spring when seasonal warming occurs. China’s winter crops were not well established last autumn, but have experienced improved precipitation in recent weeks that will be of use to establishment when it warms up once again.

Little to no winterkill has likely occurred in key wheat production areas in the Northern Hemisphere so far this winter, although a few crops in Montana might have been negatively impacted by recent cold weather.

In the meantime, India is poised to have a high yielding crop this year. Crops in the Middle East are expected to yield relatively well and China weather has improved in recent weeks and that should translate into better crop establishment during the spring. Hebei, China still needs moisture.

Southeastern Europe crops are not as well established as they should be, but winter weather has been mild leaving very little threat of crop damage thus far. Much of Russia has snow on the ground, but temperatures are well above average and expected to stay warm minimizing the threat of winterkill. Some snowmelt is expected in Russia, however.

Overall, weather today will likely have a neutral to slightly bearish bias on market mentality. 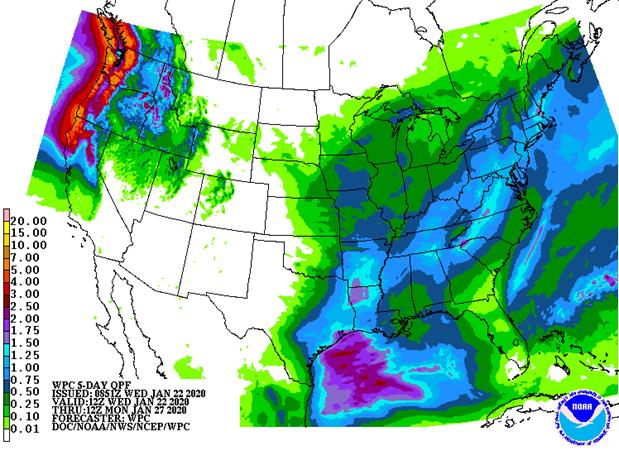 ·         Corn futures ended 1.25 cents higher in March, 0.75 cent higher in May, unchanged in July and slightly lowered in the deferred months. South Korean buying interest and talk of Egypt in for corn underpinned nearby corn.  South Korea NOFI group bought 134,000 tons. They were in for three cargos.  It was for optional origin, but some traders noted it could have been from the US as they are cheapest in the world.

·         This week US ethanol producers in the western Corn Belt are paying as much as $4.00/bu on lack of producer selling.  Dayton, OH went up 9 cents on their corn bids. Others in the eastern Corn Belt went up 3-9 cents.

·         Italian tax police confiscated an illegal shipment of pork imported from China.  9.5 tons of pork as destroyed after authorities found the meat hidden under a shipment of vegetables in a storage facility near Padua (Northern Italy’s Veneto region).  African swine fever virus is still showing up at local (China) slaughterhouse samples.

·         The German AgMin confirmed a case of African swine fever was discovered in Poland in a wild boar, only 12 kilometers (7.4 miles) from the German border.

·         The USDA Broiler report showed eggs set in the US up 4 percent and chicks placed up 4 percent.  Cumulative placements from the week ending January 4, 2020 through January 18, 2020 for the United States were 571 million, up 4 percent from the same period a year earlier.

·         CBOT soybeans traded two-sided, ending 1.0-2.25 cents lower.  Meal fell $2.20-1.80 short ton lower.  Soybean oil finished 25-27 points higher following strength in Malaysian palm oil.  Fears of the spread of 2019-nCov could limited early gains in soybeans.  The coronavirus is renewing fears China may restrict transportation of live birds and seafood.  We heard an employee at a large China soybean crusher (Shanghai) was quarantined due to illness and the rest of the office was sent home.

·         With China going on holiday Friday, and lack of buying interest, we caution bulls.

·         China was looking around for April/May Brazil soybeans, but we didn’t hear of any trades.

·         Malaysian palm markets surged on Wednesday.  Malaysia’s central bank cut rates by 0.25%.  Bloomberg noted Production in Peninsular Malaysia slipped more than 15%, while it dropped 18.5% in Sabah and about 23% in Sarawak.

There was speculation some of the soybean oil originated from the US.  February shipment from the US earlier was $788/ton fob versus $800/ton fob out of Argentina.  Sunflower oil prices originating from the Black Sea region are down roughly $25-30/ton since peaking at the beginning of the year.  On December 30, Egypt’s GASC bought 10,500 tons of sunflower oil at $857/ton and on December 29, Egypt’s GASC bought 34,450 tons of local soybean oil at $796.26/ton.  Back in October, Egypt paid less than $700/ton for soybean oil and sunflower oil.

·         Japan’s Ministry of Agriculture seeks 108,296 tons of food-quality wheat on Thursday from the United States and Canada.