WASHINGTON,
Jan. 8, 2019 ― The U.S. Department of Agriculture’s Export Sales Report for the week ending Jan. 2 will be published at 8:30 a.m. EST on Friday, Jan. 10, instead of Thursday, Jan. 9, due to the weather-related closure of Washington, D.C.-area federal offices
on afternoon of Jan. 7. 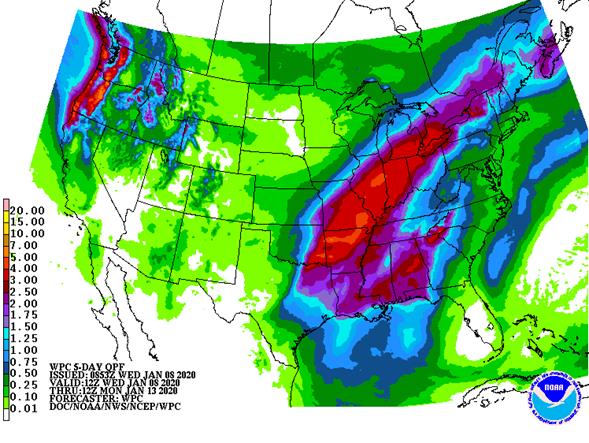 Weather
conditions in many Brazil and Argentina crop areas will be favorable over the next two weeks, although a close watch on the rain distribution is warranted. A few pockets could be a little too dry. Rio Grande do Sul will get some relief from dryness Thursday
into the weekend. Some areas in Paraguay received needed rain Monday and far southern areas will get rain Thursday into the weekend. Parts of Argentina’s north need timely rainfall will get some, but additional moisture will be needed.

South
Africa summer crop conditions should be largely beneficial over the next couple of weeks. Australia weather will continue hot and too dry for crop changes, although it would not be surprising to see some rain in eastern parts of the nation later this month.

India’s
winter crops are in very good condition and should remain that way for the next two weeks. Summer crop harvesting in the south will continue around brief periods of rain.

China
rapeseed conditions will have potential for improvement in the spring after this week’s storm system brought significant moisture to the production region. A follow up storm system will see to it the region is plenty moist in the spring.

Southern
Europe and the southwestern parts of the CIS will dry out for a while, but winter crops are dormant or semi-dormant and will not be bothered. A boost in precipitation will be needed in the late winter prior to the start of spring growth.

Winter
crop conditions around the world are either in fair to good condition or poised for improvement. Recent moisture in the United States will be good for spring crop development. Snow will develop in the northwestern U.S. Plains before bitter cold conditions
evolve in the next week to ten days to prevent winterkill.

Ukraine,
southern Russia and Kazakhstan are still snow free and some winter crops are not well established due to dryness and change is needed by spring to improve crops.

There
is no risk of crop threatening cold in Russia, Europe or most of China’s key winter crop production areas for the coming week to ten days. Winter crops are not as well established as they should be in some areas of southeastern Europe locations or in parts
of China, but recent rain and snow in eastern China will see to it that big improvements occur prior to the start of aggressive crop development in the spring.

India’s
winter crops are poised to perform quite well this year and rain in Pakistan Sunday into Monday will improve the outlook there as well.

Dryness
in northern Africa will be closely monitored with Morocco the only area at risk of lower production today but drying in northwestern Algeria will continue for a while. 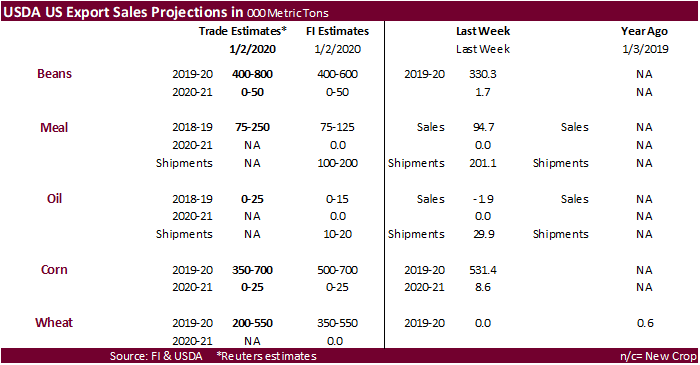 ・
Nearby corn futures were weaker (back months were up) following a higher USD, lower crude oil, positioning ahead of the USDA reports and China ethanol developments. Macro influences had a major impact on CBOT
wheat, soybean and corn prices today.  Adding onto the bearish undertone in corn was a 6.8 percent increase in US ethanol stocks from the previous week, as reported by the EIA. Conab reported Brazil corn production (98.71) below a Bloomberg average but the
trade appeared to be shrugging off the update.  Uncertainty over the size of the South American corn and soybean crop has not seem to be a large factor in prices lately.  Traders are more concerned with geopolitical developments and positioning ahead of the
USDA January 10 reports.  With this said, there were a considerable risk on/off activity in commodities today.  WTI fell more than $3.00, and when the February contract broke below $60/barrel, there was a huge spike in corn volume.  Theory is that funds were
shoring up long positions in WTI, and dumping money into corn and wheat, and possibly soybeans.  Other than that, the fundamentals didn’t favor bull traders in corn, wheat or soybeans today, in our opinion.  Unless you traded solely on Conab estimates.

・
Funds were even in corn.

・
China suspended its initiative to boost the national ethanol blending target to 10 percent due to tight supply of corn stocks.  In 2017 they announced a 10 percent blend mandate by 2020.  This is perceived
to be negative for US corn futures as traders hoped China would increase US ethanol imports amid phase one trade deal.  Reuters noted “Reaching the 2020 target would have required about 15 million tons of the biofuel annually, more than four times current
output, or some 45 million tons of corn, which is about 16% of the country’s current consumption.”  Brazil has plans to ramp up corn for ethanol capacity.  Like the US, Brazil would like to export ethanol to China.  China corn reserves were projected around
50 to 60 million tons last fall, about a quarter where they were thought to be at in 2017.

・
Bulgaria plans to cull another 40,000 pigs due to another outbreak of African swine fever.  Last year Bulgaria culled 130,000 pigs.

・
The weekly USDA Broiler Report showed eggs set in the United States up 4 percent and chicks placed up 4 percent.

・
China sow herd increased 2.2 percent in December from November and is up 7 percent since September.  China does not report the number of its sow heard but it was thought it declined 40 percent in September
compared to the previous year.  Some analysts estimate 55 percent of the pig crop was lost since mid-2018.  Poultry production was up 3 million tons or about 15% in 2019 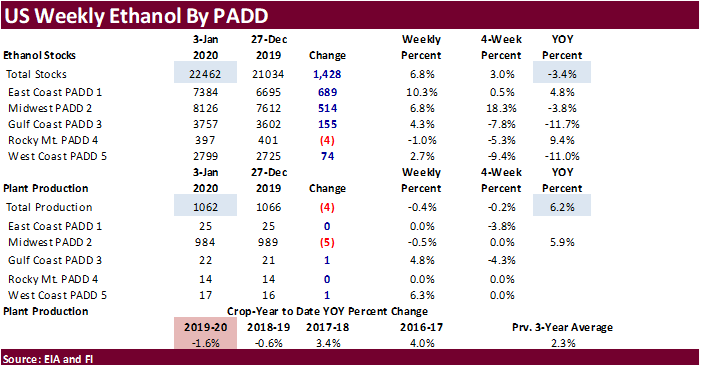 U.S.
average retail gasoline prices in 2019 were slightly lower than in 2018
https://www.eia.gov/todayinenergy/detail.php?id=42435&src=email

・
Soybeans opened
unchanged to slightly lower on lack of direction but rallied on technical buying and stronger CBOT soybean meal. The products are seeing a reversal with meal higher and soybean oil lower.    Conab reported Brazil soybean production (122.23) below a Bloomberg
trade guess but the trade seemed to be ignoring the number.  See the first bullet point in corn for our macro comment.

・
India banned imports of refined palm oil.  This should be negative for global vegetable oils.  India buys most of its refined palm oil from Malaysia and this holds, it could be a big blow to Malaysian palm
oil prices.  Meanwhile, Primary Industries Minister Teresa Kok told reporters that the new B20 mandate for biodiesel consumption will require an additional 500,000 tons of crude palm oil in 2020.  On December 27 the USDA Attaché estimated Malaysia 2019-20
industrial domestic use for palm oil at 3.065 million tons, up from 2.789 million tons.  It will be interesting to see if Malaysia will reach its 20 percent target, after rolling it out for the transportation sector (Feb) and if industrial domestic demand
increases beyond USDA’s (Attaché) 3.065-million-ton projection.   We are under the opinion B20 will not be met until late in 2020 due to logistics, but a potential pileup in palm stocks after India cutoff Malaysian palm imports could facilitate the program.
Malaysian palm for biodiesel production increased to about 1.6 million tons in 2019 from 120,000 tons in 2010.  MPOB is due out with updated S&D data on Friday (late Thursday evening for US observers). 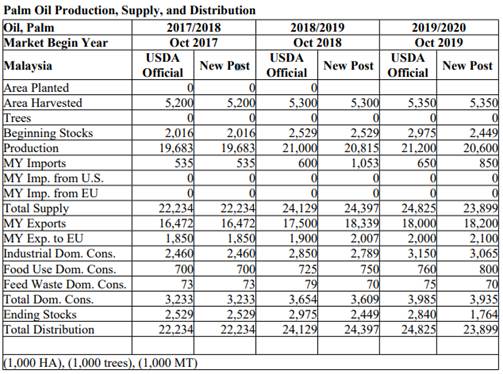 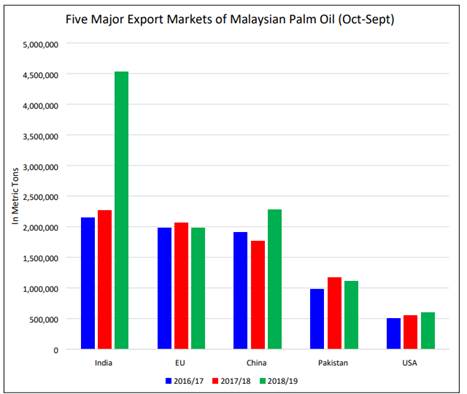 ・
Despite the higher CBOT, US country movement of soybeans was slow as of mid-week. Basis formed a touch in NE and northern IL.  Forward sales in South America are also slow. The USD is losing against the BRL.
Argentina spot crush margins are poor but new-crop is a little better.

・
Australia’s weather bureau does not see any sign of cooler weather or significant rain over the next few months.  Fires have destroyed nearly 26 million acres of land.

・
USDA is set to release their annual crop production report on Friday.

・
US wheat futures
started the day session mixed but ended higher on technical buying, positioning ahead of the USDA reports, and Egypt picking up 300,000 tons of wheat-an indication global import demand is still strong.  Egypt paid about $10/ton above what they paid in their
last import tender mid-December.