PDF attached includes FI’s US S&D’s, but the funds were not available at the time this was written

US
airstrike near Baghdad’s airport killing a top Tehran general is widely affecting global markets. Gold and most energies were up sharply.

CFTC
is delayed until Monday

China
may see its largest snow event in years.  This weekend into Tuesday, snowfall of 4 to 10 inches and local totals of 10-20 inches will fall across much of Shaanxi, Shanxi, Shandong, northern Henan, northwestern Hubei and northeastern Shandong.

South
America weather will be mixed with some concern about drying in northern Argentina, Paraguay and southern Brazil, but the odds seem to favor some timely rain in these areas especially in the Jan. 9-16 period and as long as that evolves production potentials
will not be changed. Weather in southern Argentina and the remainder of Brazil should be favorable with temporary improvements in northeastern Brazil.

In
the meantime, recent rain in southern Sumatra and western and central Java and has been improving soil moisture for better oil palm production potentials in 2020. The rain must be sustainable over multiple weeks and it looks like that may be the case.

South
Africa crop weather will remain varied offering some timely rainfall to many areas, but frequent follow up rain will be needed to seriously change crop moisture and development potential. Some areas may not get enough rain to counter evaporation in the next
two weeks while many others will.

India
will get some additional showers over the next couple of week benefiting some winter crops. Timely precipitation has occurred in many other areas and more is expected next week to support good yields.

Winter
crops in China and Europe are semi-dormant and mostly in good shape. Rain and snow in China this weekend into early next week will help to improve soil moisture for better winter rapeseed establishment prior to reproduction in the spring. That same storm in
China will produce some significant impacts on travel and livestock this weekend with substantial rain and snow in east-central parts of the nation.

Late season farming activity in the United States will not advance very well for a while, but that is no change from recent weeks.

More
rain in the U.S. Midwest and southeastern Canada over the next couple of weeks will maintain wet and in some cases snow covered conditions which should be good for crops in the spring.

Winter
crop conditions in China will improve if precipitation falls as expected this weekend and early next week. The moisture will fall in areas that were a little dry in the autumn. Improvements in wheat establishment prior to reproduction cannot occur until warmer
weather comes along in the spring, but the moisture should still be available to crops unless a warm and dry finish to winter and start to spring takes place. The same weekend storm in China will threaten livestock, induce power outages and cause travel delays
as significant rain and snow fall.

India
wheat production areas will receive some welcome precipitation over the next week to ten days further ensuring high yields this winter.

Crops
in Europe and the western CIS are dormant and mostly in fair to good shape. Some significant snowfall is likely in northwestern Russia and some neighboring areas. Dryness in the autumn left many crops in southeastern Europe, including Ukraine, and Kazakhstan
with poor emergence and establishment. Timely precipitation and seasonable temperatures will be needed in the spring. Until then, snow is needed to protect poorly established crops from any harsh or extreme weather that suddenly evolves. There is no threat
of damaging cold for the next two weeks and snow will be widespread in northern Russia and a few neighboring areas.

North Africa wheat is in fair to good shape. Crops in southwestern Morocco are not well established and need timely rain in the next few weeks to induce better establishment prior to reproduction.

Argentina
harvesting was disrupted by rain recently and additional precipitation is expected late this weekend, but good field working conditions should occur into Saturday to get some of the remaining wheat and barley crop harvested. 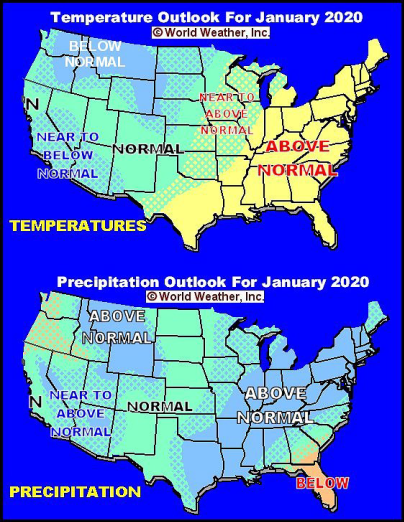 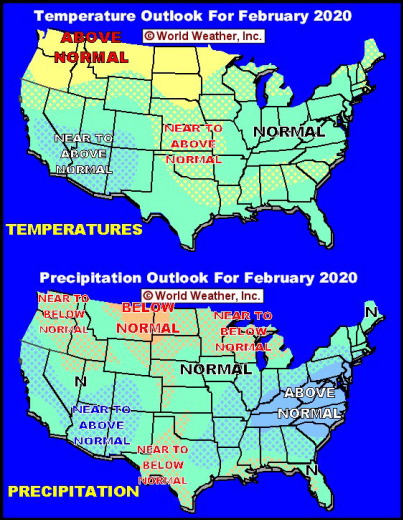 USDA
export sales
were poor all around (holiday week). Soybean oil and all-wheat crop-year to date commitments lost some of its edge to the year ago pace. Soybean oil sales were negative 1,900 tons. Soybean sales were below expectations and a marketing year low.  Soybean meal
sales of less than 100,000 tons were at the low end of expectations.  Corn sales of 531,400 tons were within expectations, lowest since October 31 and well below its previous 4-week weekly average of 938,400 tons.  Corn commitments to Japan and especially
South Korea, are running below their respected 3-year averages.  All-wheat sales of 312,900 tons were down from 715,000 tons previous week.  Pork sales were a marketing year low. 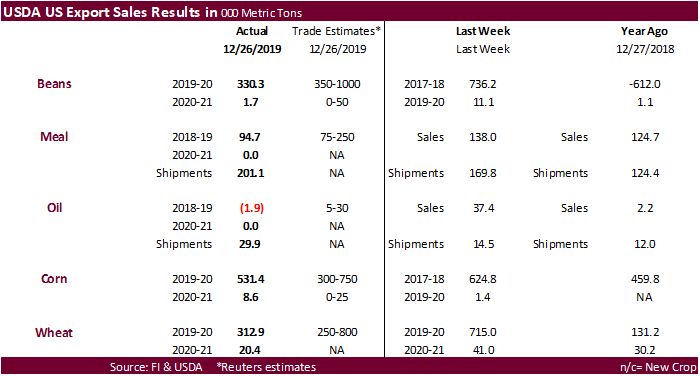 ・
Corn traded 1.75-5.00 cents lower (bear spreading) on weakness in wheat, livestock disease concerns, and slow US export developments. EIA reported a decline in US ethanol production, but stocks were down for
the third consecutive week.  Yesterday USDA reported the November corn for ethanol use a little higher than expected, but the discrepancy was not large enough for us to think USDA will change its outlook for corn for ethanol use on January 10.

・
Predicting December 1 US stocks this year for corn and soybeans was much more difficult than recent years, given the uncertainty what USDA will do with 2019 US supply (planted, harvested, yield, production).
Our December 1 US stocks estimate may end up near the lower end of trade expectations, based on a bullish Q1 corn for feed estimate amid higher animal unit numbers and lower harvested area.  Our working December 1 corn ending stocks is 11.489 billion bushels,
well below 11.665 billion University of Ill projected.  FI’s full list of estimates for USDA’s January reports will be in selected polls released on Monday.

・
Geopolitical tensions were in focus today as traders assess the impact over the US air strike near Baghdad’s airport killing a top Iranian general and other government official.

・
Bulgaria will cull 24,000 pigs after ASF was discovered at a pig farm in the northeast of the country, its first industrial farm case since August.

・
Baltic Dry index fell 7 percent on Friday. Yesterday it was down nearly 10.5 percent. 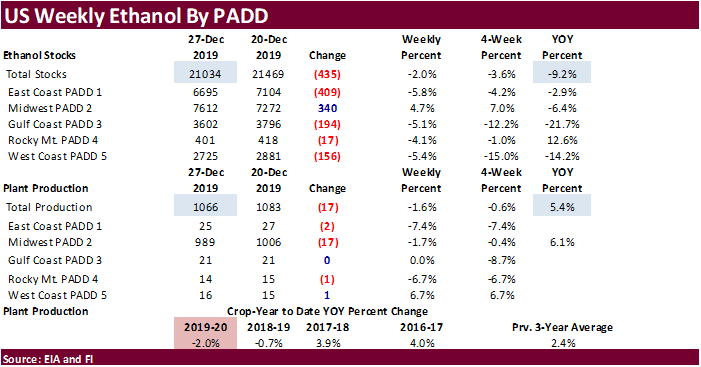 ・
Soybeans and meal started the day lower on geopolitical problems and lack of confirmation China bought US soybeans over the past week.  Soybean oil started the day near unchanged.  Less than an hour into the
session prices tanked, presumably on reports Phase One of the US/China trade deal could be delayed after the US launched a strike against an Iranian convoy in Iraq, killing a top general.  While in a lower trade, stops sent soybeans down about 19 cents in
early day session trading.  Nearly 6k SH traded @ 9:22 am CT, sending March from $9.43 to $9.3750.  At the same time 2000 meal and 2000 corn traded.  Profit taking, bird flu discovery in Poland reported yesterday, ASF reported in Bulgaria, and slow US export
developments weighted on not only soybean, but soybean meal prices.  Soybean oil followed soybeans lower.

・
USDA soybean export sales were a marketing year low and we look for another week of slow sales to be reported next week.  Buyers were nonexistent this week for Gulf and PNW soybeans.

・
Southern Argentina has a chance for rain over the weekend.  Brazil saw good rain on Thursday and more rain is expected next week.  Note yesterday USDA’s Attaché estimated the Brazil soybean crop at a record
123.5 million tons.

・
US wheat futures fell on profit taking and uncertainty over US grain demand for the Middle East after the US airstrike in Iraq. Fears US wheat and corn shipments into the Middle East may be compromised by
a military conflict weighed on prices. In addition, there were rumors China could back off from the Phase One trade deal that could put millions of tons of US grain sales at risk.  KC and Mn wheat were hardest hit today with nearby contracts 10.25-11.25 cents
lower. Chicago finished 3.50-5.75 lower.

・
Northeast Ukraine and Russia’s central region and Volga Valley will see snow over the next few days. 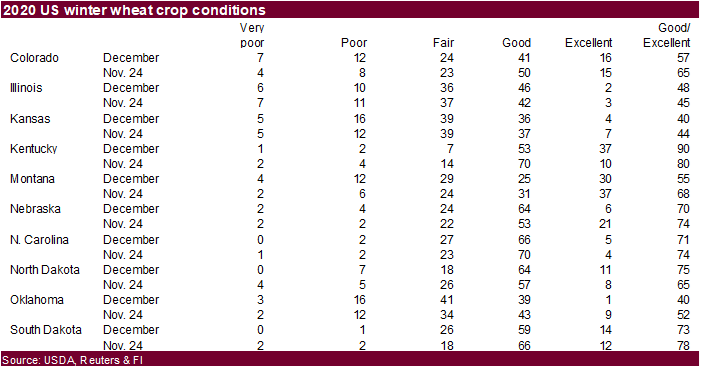 This summary is based on reports from exporters for the period December 20-26, 2019.