USDA
announced sales of soybean, meal and corn.  Soybean futures are surging higher again on heavy fund buying amid Chinese buying that seems not to be slowing down.  Chicago soybeans hit their highest level since May 2018.  Bunge cancelled 8 SBO registrations.
President Trump announced $13 billion of US farm aid yesterday while visiting Wisconsin.  Back in April $19 billion relief was announced, including $16 billion in direct payment.  $28 billion of trade aid was handed out in 2018 and 2019.  US corn is higher
following the soybean strength.  China Dalian corn hit a fresh five-year high with January gaining 55 yuan (about 8.14 U.S. dollars) at 2,484 yuan per ton.  China’s currency is strong.  French corn ratings declined to 59 percent good to very good as of September
14 from 60 percent previous week.  4% of the corn crop had been collected.  Ukraine grain exports are running 10.2 percent below year ago level (July-June season) at 10.33 million tons (11.5MMT year ago), according to the economy ministry, including 612,000
tons of corn (1.9MMT year earlier).  La Nina like conditions with dry areas across the southern US winter wheat belt is a supportive feature for wheat. 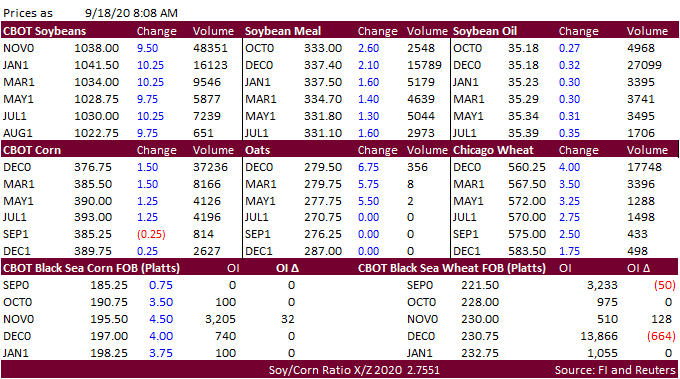 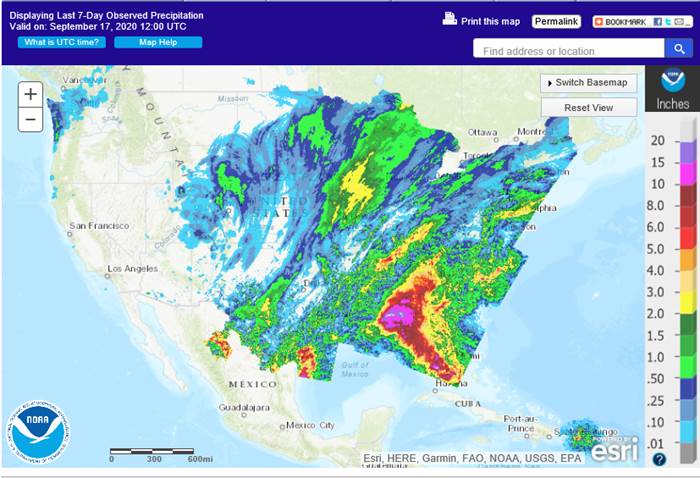 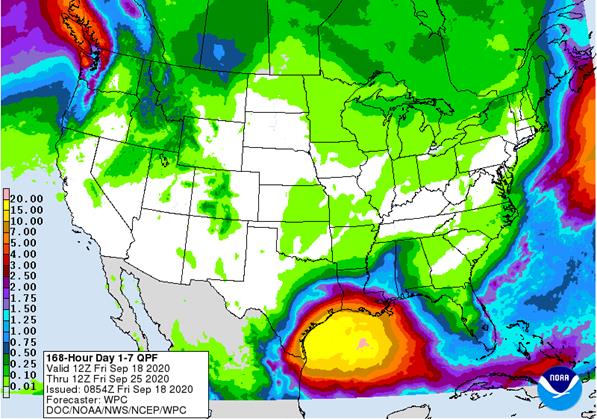 A
tropical disturbance in the southwestern Gulf of Mexico is becoming better organized and has recently been upgraded to Tropical Depression Twenty-Two. The system’s center is between the southern tip of Texas and the Yucatan Peninsula. The system’s movement
will likely be slow and erratic the next several days as it meanders in the western Gulf of Mexico. Confidence is low of a direct landfall in southern Texas; however, it could get close enough early next week to promote significant bands of rain in the region,
especially near the coast. The European Model suggests the system then moves towards the Delta after this; though, this will depend on a variety of factors including its strength and land interaction. This will become a tropical storm and possibly a hurricane.

The most significant precipitation in the second week of the outlook in this evening’s GFS model run was the increase in the Hard Red Winter Wheat Region, West Texas, and eastern half of New Mexico Sep. 30 – Oct. 2. The increase was due to a slow-moving upper-level
weather disturbance and moisture from a tropical disturbance suggested near Baja California Sur. The model was out of line with this rainfall scenario and suggested way too much moisture. Changes are expected in future model runs.