Please
note I will be out the balance of the week, attending the AFOA conference in Nashville.

CBOT
soybean complex, corn and oats ended lower.  Wheat was higher.  Our bias is for soybeans and corn to continue to trend lower and wheat to trade two-sided over the short term.

following
the release of the report soybean prices dropped and corn followed.  Wheat traded two-sided post USDA report and then trended higher in part to wheat/soybean and wheat/corn spreading.  2021 US soybean production was upward revised 74 million bushels after
the USDA raised the US yield by 0.9 bu/ac to 51.5, 0.4 bu/ac above an average trade guess.  There were no changes to the US harvested area for soybeans and corn.  USDA increased the 2021-22 US soybean carryout to 320 million bushels, 20 million above the trade
average.  USDA made some adjustments to their old crop balance sheet, including the 81 million bushels increase in ending stocks per September 1 stocks (2020 upward revision to production).  For this crop year, USDA increased soybean production by 74 million
bushels.  They lowered imports by 10 million.  For US crush, USDA increased it by 10 million bushels, and increased residual by 1 million.  We still think USDA is too low on 2021-22 US crush.  What was interesting to see was USDA’s adjustments to old-crop
soybean oil.  They decided to lower food use by 175 million pounds and left unchanged soybean oil for biodiesel. We thought they would adjust lower SBO for biofuel.  They took SBO 2020-21 imports up 30 million pounds and raised the end of October ending stocks
by 205 million pounds to 2.063 billion, well above the 1.2-1.3 billion the trade was looking for about six months ago.  New-crop SBO production was raised 115 million pounds (higher crush) to 25.535 billion, above 24.980 billion produced in 2020-21.  USDA
cut old-crop soybean meal ending stocks by 50,000 short tons to 400,000 (we were looking for an upward revision).  They lowered old-crop exports by 200,000, raised domestic use by 175,000, took production down 55,000, and lowered imports by 20,000 short tons.
For new-crop USDA raised production by 250,000 short tons and raised domestic use by 300,000 short tons, resulting in a 400,000 short ton carryout, 100,000 less than the previous month.  World soybean production was revised higher by 0.7 million tons to 385.1
million, 5.4% above the previous year.  World ending stocks were reported at 104.6 million tons, 3.9 million above an average trade guess, 5.7 million above the previous month and 5.5% above 2020-21. 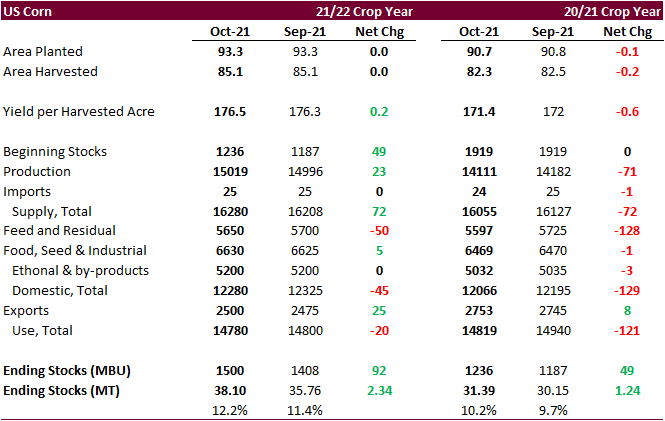 After
adjusting for a lower all-wheat crop production per Small Grains Summary, USDA cut the 2021-22 US stocks by 35 million bushels to 580 million, about in line with trade expectations, and down 31 percent from last season.  USDA lowered its outlook for HRW wheat
stocks by 36 million bushels and SRW by 5 million, and slightly raised the other three classes of wheat.  USDA’s 51-million-bushel reduction to 2021-22 all-wheat production forced them to trim the feed use by 25 million bushels.  They also lowered imports
by 10 million, possibly by recognizing a short Canadian wheat crop (was taken down 2MMT this month).  USDA lowered world wheat production by 4.4 million tons and world ending stocks by 6.0 million tons (3.6 million more than what the trade was looking for).