Weather conditions are unlikely to change greatly during the next couple of weeks. Scattered showers will occur across key grain, oilseed and cotton production areas in the nation and temperatures will become seasonably warm. The alternating periods of sunshine and rain will be ideal for late season crop development with the exception of dry pockets that will remain. The largest dry pocket remains in portions of Iowa and there has been some expansion of the dryness to neighboring areas recently.  Rain expected over the next ten days to two weeks will whittle away at some of the northwestern dryness, but portions of the region will continue struggling for greater rainfall. Another area in need of rain is the northern Delta and a part of the Tennessee River Basin and this region may also struggle with dryness for a while. Most other crop areas east of the Plains will experience mostly good conditions. There will be some ongoing concern over dryness in the northwestern Plains, Canada’s Prairies and in a part of western Texas. Most of the far western U.S. is quite dry and the southwest monsoon will continue to be a poor performer for the next couple of weeks.

Relief from dryness in France and neighboring areas is still being advertised for next week. The situation will be debated for a while over how significant the relief will be, but the nation is critically dry and needs rain. A notable warm up is expected to precede the rain adding more stress to crops and making the already stressful situation much worse.

Overall, the relief that comes to France next week will be brief, but very much welcome. Western parts of the nation will reap most of the benefits from rain. Greater precipitation may evolve across the United Kingdom at the same time. High pressure is expected to build aloft over central Europe for a while this weekend and next week inducing a restricted rainfall pattern and warm temperatures that promote net drying.

Model consistency today remains for abundant rain to fall near and immediately east of the Ural Mountains in the central New Lands over the coming ten days. Some areas may receive 2.00 to more than 5.00 inches of rain by the end of next week. Some of that same region is already saturated or nearly saturated and that may raise some potential for flooding.

Overall, the weather change advertised for next week will be mostly good, although concern over crop quality in the central New Lands will rise because of the wetter bias in that region.

Overall, no significant changes were noted or expected in eastern China’s key crop areas during the next ten days to two weeks.

The bottom line remains one of ongoing concern for Argentina wheat and barley in the west where drought remains and is not likely to change. Southern Brazil rainfall in the second week of the outlook will improve wheat conditions and early corn planting conditions, but it is still questionable how heavy that rainfall will be and how far to the north it might extend. The 06sz GFS model may have taken too much rain out of Sao Paulo and made areas to the south too wet. 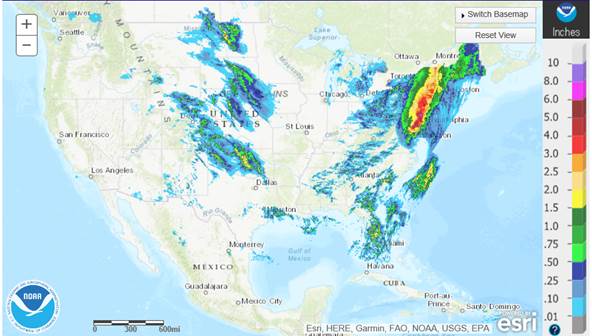 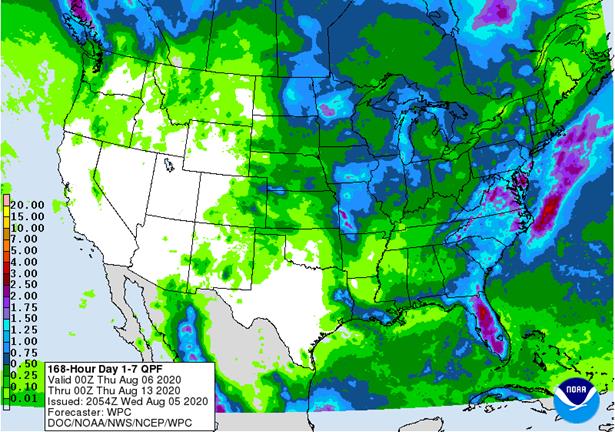 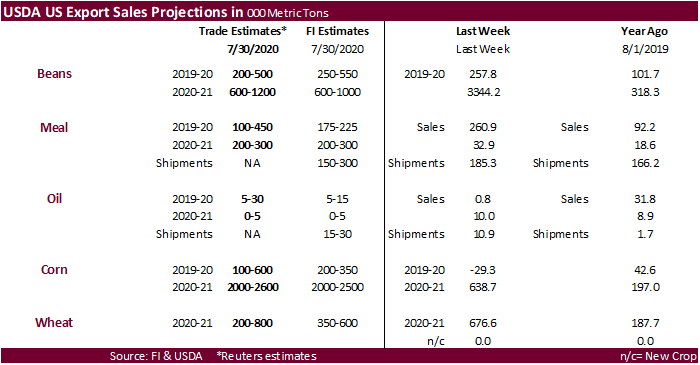 ·         The U.S. and China have agreed to high-level talks on Aug. 15 to assess Beijing’s compliance with the bilateral trade agreement signed early this year 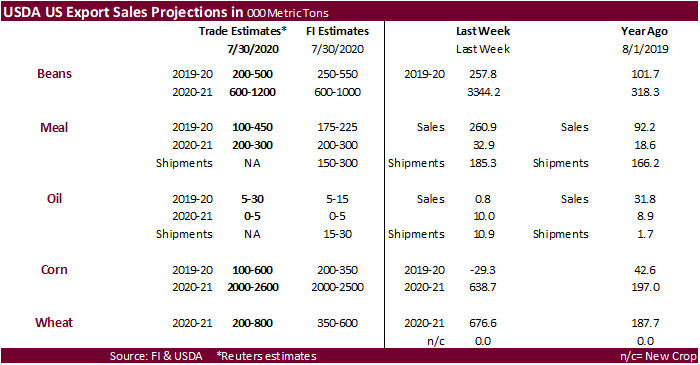 Debate over Brazil’s tariff-free ethanol import quota is heating up ahead of a 31 August expiry. Brazil imposed a 20pc import tariff on ethanol imports in August 2017 in the face of rising imports from the US, with a 600mn liters/year (10,339 b/d) tariff-free quota. Amid pressure from Washington, the tariff-free quota was raised to 750mn l last year. Brazilian authorities are currently reviewing whether to extend or alter the tariff. “If the quota is renewed, everyone should have access,” Sergio Araujo, president of the fuel importers association Abicom, told Argus, referencing a government decision last year to limit access to the tariff-free quota exclusively to biofuels producers, shutting out importers and distributors that had access to the quota in past years. Araujo added that ethanol imports are needed no matter what happens to the tariff. “There is a structural production deficit,” he said.

·         Palm oil:  Down 2 percent.  Market is projecting 5 percent drop in July palm production and stocks down 12 percent to a 3-year low.  Early trade estimates were looking for production to drop 8 percent.