We
updated our price trading ranges

US
soybean crop ratings increased one point (trade looking for unchanged) to 73.  Corn was unchanged, as expected.  Spring wheat conditions increased 3 points to 73 (trade was unch.).  US wheat harvesting progress fell below trade expectations.  This morning
USDA reported 260,000 tons of soybeans to unknown. 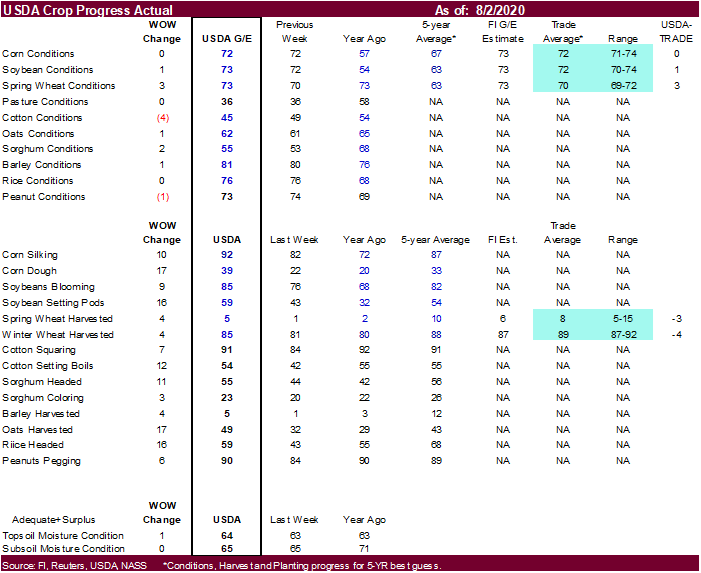 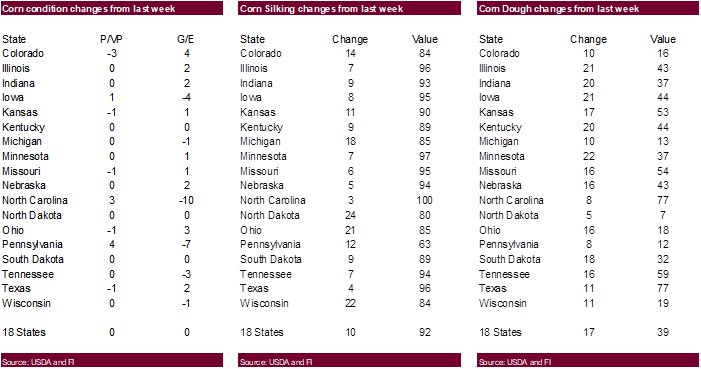 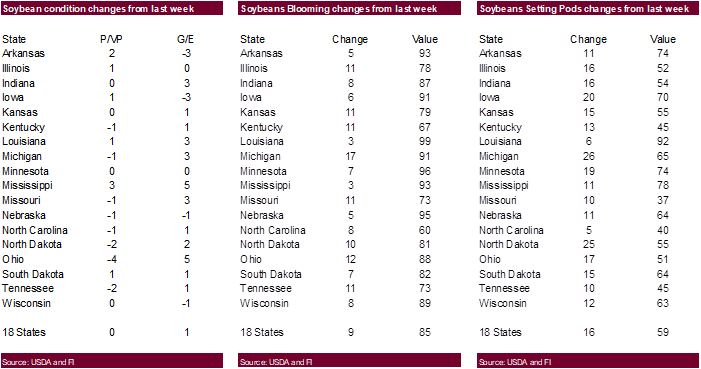 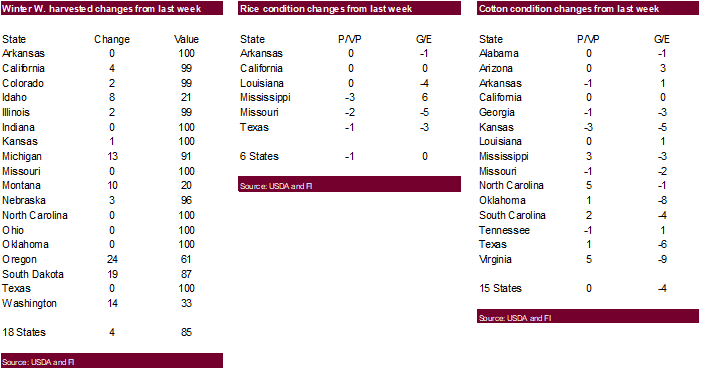 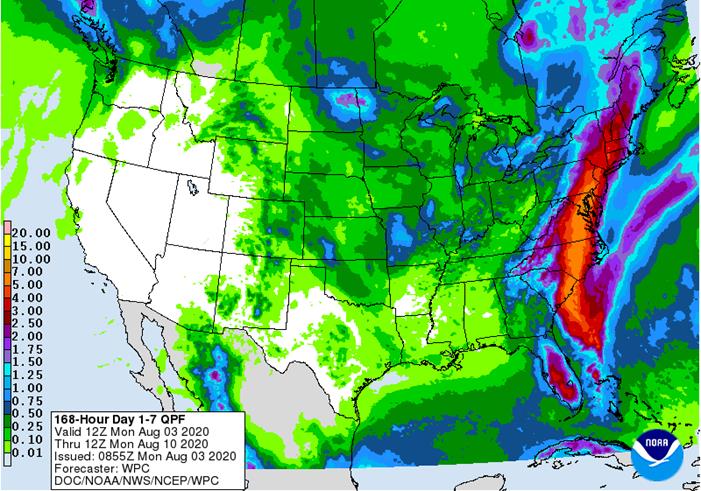 MARKET
WEATHER MENTALITY FOR CORN AND SOYBEANS:  U.S. weather is expected to be mostly favorable as it should continue to be in India and China.

Net
drying will occur in parts of Canada’s Prairies for a while this week into next week which may stress a few crops like those of the northwestern Plains. Crop conditions are improving in Mexico and still look good for Australia with significant rain coming
soon to that nation.

Early
season corn planting will advance quickly in Brazil, but rain is needed to improve soil moisture for emergence and establishment. Dryness and some excessive heat will be a concern for summer coarse grain and oilseed crops in parts of western and southeastern
Europe as well as eastern Ukraine into Russia’s Southern Region. Dryness will also continue in some of the sunseed areas of Russia’s eastern New Lands.

Some
concern over net drying will also continue in oil palm production areas of Indonesia.

MARKET
WEATHER MENTALITY FOR WHEAT:  Most of the damage done to this year’s spring cereals has already been done and no further change of great significance is expected unless the harvest season turns wet.  Some lower production is expected from Russia and Europe
due to dryness in the New Lands and in various areas in northwestern and far southeastern Europe. China’s spring wheat has performed well. Australia’s winter crops will benefit greatly from rain coming over the next two weeks and some ongoing dryness in Canada’s
Prairies may further stress late filling crops. Argentina drought will not change over the next two weeks. 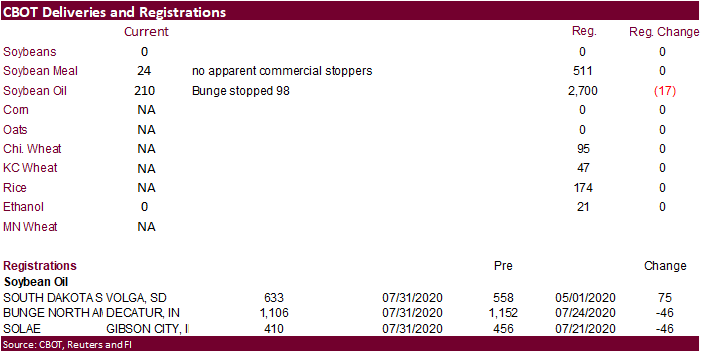 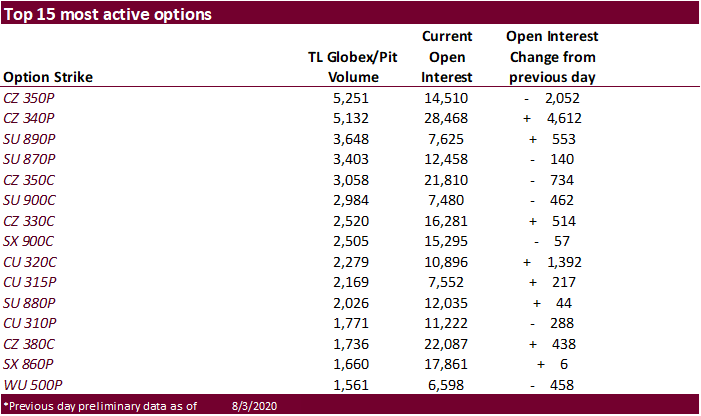 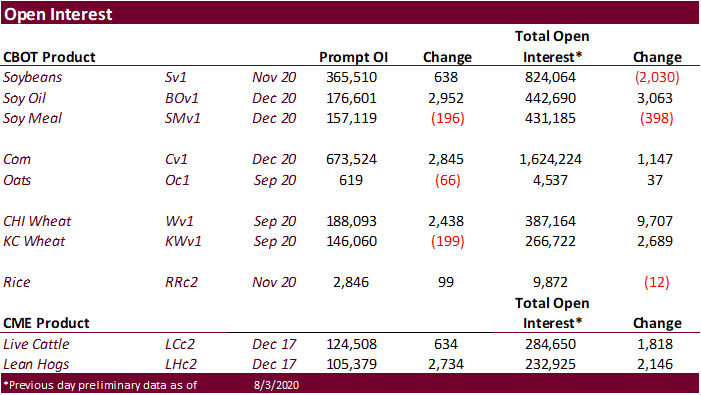 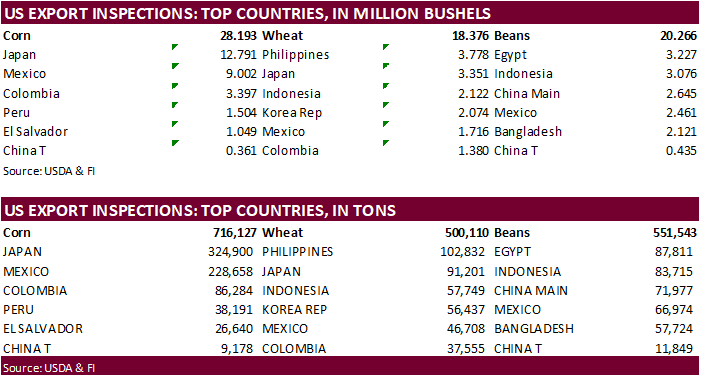 (Reuters)
– U.S.
manufacturing activity
accelerated to its highest level in nearly 1-1/2 years in July as orders increased despite a resurgence in new COVID-19 infections, which is raising fears about the sustainability of a budding economic recovery. 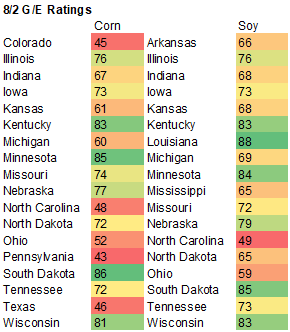 US
corn usage for ethanol production rebounded to 379 million bushels for June versus 300 million in May and 245 million in April.  Year ago, corn use was 456 million.  Sorghum use fell to a multi-month low of 2.3 million.

·
Soybeans
traded much of the day higher following sharply higher soybean oil.  September soybeans were up for the third consecutive day.  August was unchanged, September 2.75 cents higher and November up 3.75 cents.

·
September soybean oil rallied 75 points to 31.22, highest values since February 24.
We think September SBO has a good chance to trade up into the 32.00-32.50 area.
Palm oil prices in Malaysia and China were sharply higher on Monday from robust July Malaysian palm oil shipments.  Late last week EIA reported a large increase in US soybean oil for biodiesel use which is helping CBOT SBO.  Product spreading pressured
US soybean meal.  Sep meal was down $1.90.

·
Offers for US Q3 soybean oil are drying up, in part to good biodiesel demand and September crush downtime.  We are hearing Q4 is tight but Q1 is available.  Argentina Aug was last 470 over and Brazil
fob 550 over.

·
USDA announced additional sales for unknown destination(s).  It might be for Europe or Mexico as we didn’t hear of any Chinese buying over the weekend.

·
US weather remains ideal but warmer temperatures return this week for the US Midwest and rains will be less frequent.

·
The European Union imported 1.37 million tons of soybean imports during the July 1 and August 2 period, 6 percent below the same period year ago. EU rapeseed imports reached 90,415 tons, down 68%.

·
China bought about 20 to 25 cargoes of soybeans last week, mostly of Brazilian origin.

·
AmSpec: Malaysian palm oil exports for the month of July were up 6.8 percent to 1.740 million tons from 1.629 million tons for June.