Choppy
two-sided trade in CBOT futures.  WTI was sharply lower after OPEC and its allies agreed to boost output.  USD was up 15 points as of 1:30 PM CT.  Virus concerns impacted other global markets.  US equities were sharply lower.  30 year yield traded at 1.81%,
lowest since February 1.  US spring wheat conditions declined by a more than expected 4 points to only 11 percent good/excellent.  Corn was unchanged at 65 percent and soybeans rose one point to 60 percent.  73 percent of the US winter wheat had been harvested,
up from 59 percent last week and one point below average. 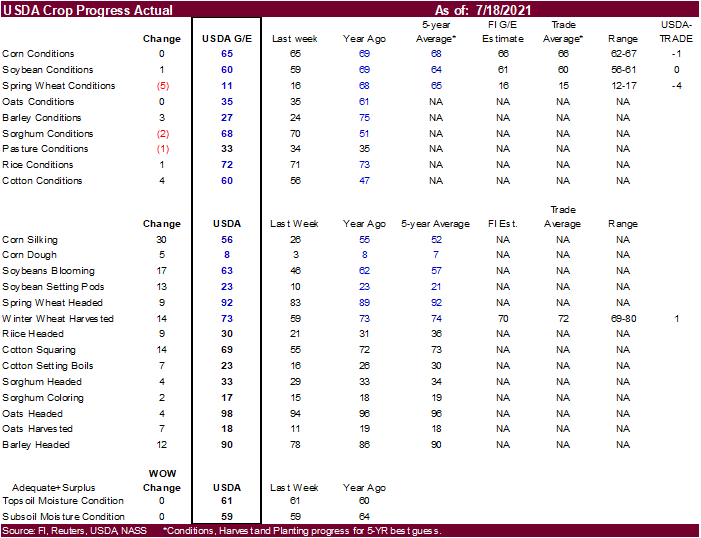 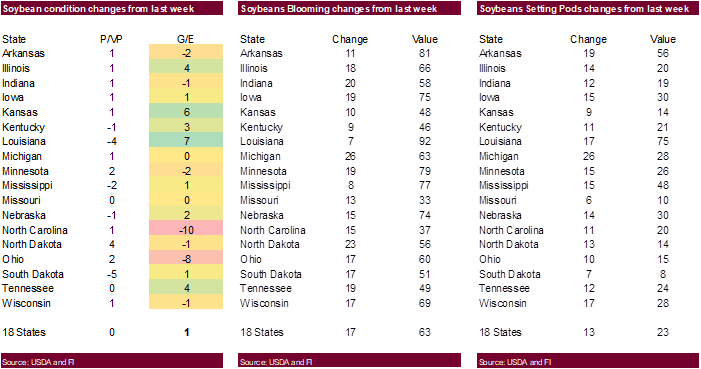 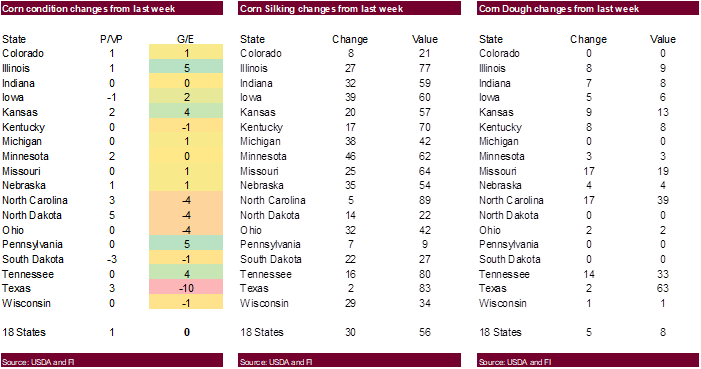 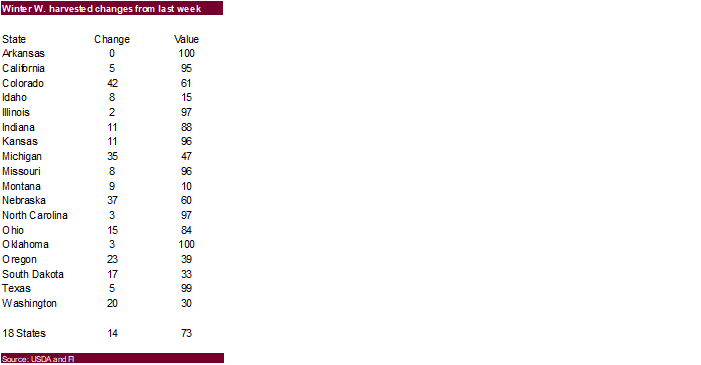 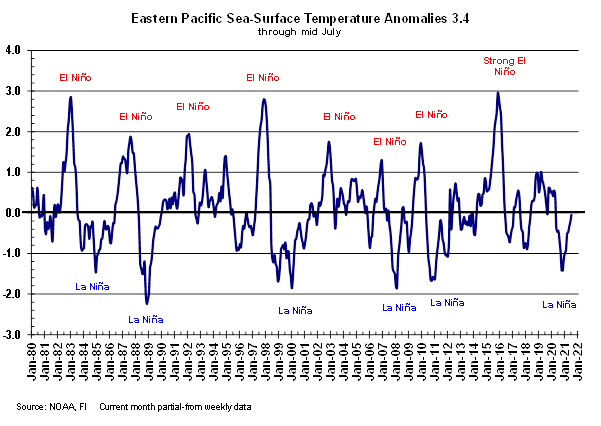 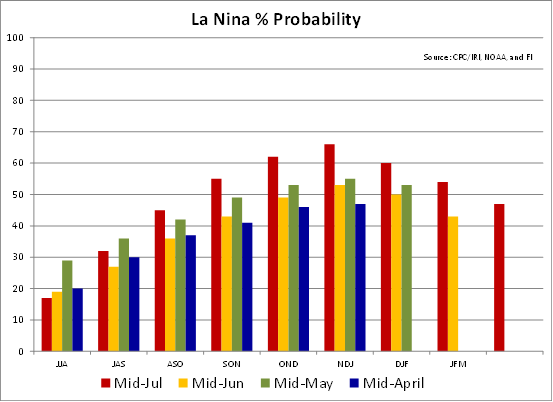 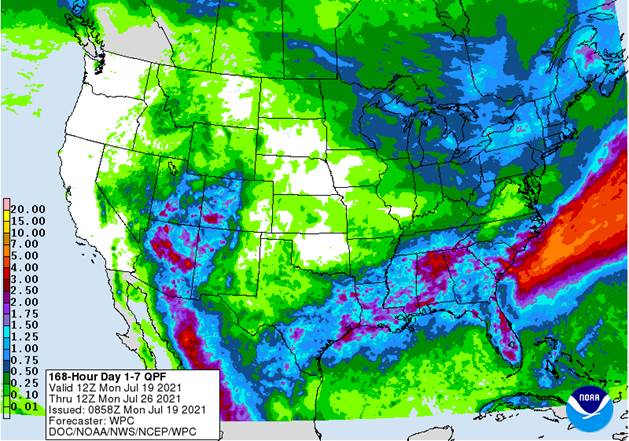 o
Frost in sugarcane, citrus and coffee areas should not have been serious enough to induce permanent crop damage

o
The storm will eventually move inland over Guangdong, China Tuesday and heavy rain from the storm is expected through at least Thursday resulting in some flood damage to rice and personal property

o
In-Fa is expected to become a typhoon Tuesday and it will pass to the immediate north of Taipei, Taiwan Friday

o
Rain the U.S. southeastern states was more erratic with local totals of 1.00 to 2.00 inches in parts of Alabama, central South Carolina and from northeastern North Carolina into southeastern Virginia

o
Scattered thunderstorms occurred in the Texas Panhandle and northern parts of West Texas with rainfall reaching 1.00 to 2.67 inches near the New Mexico border

o
Dry weather occurred in most of the far western U.S.; including the Pacific Northwest, California, the Great Basin and much of the southwestern desert region

o
These areas will not be totally dry, but the showers that occur will be too brief and light to counter evaporative moisture losses

o
Net drying will continue elsewhere; including most of the western Corn Belt

o
The warmer bouts of weather will prove very helpful to corn and soybean production areas that have abundant soil moisture since it will stimulate more aggressive crop development and help ensure the best yield potentials.

o
Resulting rainfall is not likely to be great enough to seriously improve crop or field conditions, but any rain would be better than none

o
Temperatures will be warmer than usual throughout the coming two weeks except in northwestern Alberta where additional rain is expected periodically which will help hold temperatures down for a little while.

o
Harvest delays continued during the weekend, but change is coming

o
Not all areas received sufficient rain to ease long term dryness, but a significant amount of relief occurred in other areas

o
Additional rain will fall in a part of this region this week with 0.50 to 1.50 inches of rain expected throughout southeastern Europe

o
The moisture was welcome in western Russia where net drying occurred in the past week, but more rain is needed

o
Net drying is expected in northwestern Russia, the Baltic States, Belarus and many areas from Russia’s Southern Region into Kazakhstan

o
A boost in rainfall should occur during mid- to late-week next week in northwestern Russia, the Baltic States and Belarus

o
Highest weekend temperatures were in the upper 80s and lower 90s in much of the nation, but in the upper 90s in the interior south

o
Tropical Storm Cempaka was expected to drift into Guangdong Tuesday and last through Thursday with rainfall of more than 10.00 inches of rain resulting

o
The storm may impact Taiwan and both Fujian and Zhejiang, China during the latter part of this week

o
No land impact is expected from either of these storms

o
Amounts were highly varied with most areas reporting 1.00 to 3.00 inches in the east while interior southern areas reported amounts mostly under 1.00 inch

o
Coastal areas were wettest along the middle west coast where rainfall of 5.00 to more than 13.50 inches resulted

o
Soft frost may reach a few pockets in the traditionally coolest areas of Sul de Minas, but no crop damage is expected in the key coffee, citrus or sugarcane production areas

o
Weekend rainfall was greatest from South Australia into Victoria and New South Wales where 0.30 to 0.71 inch occurred with local totals of 1.00 to 2.60 inches in Victoria

o
Drought conditions are waning and crops are performing better