Corn
saw technical buying today after selling stalled on Wednesday.  Soybeans were higher on Chinese demand and sharply higher soybean oil.  Wheat was on the defensive on improving global weather and profit taking after Chicago traded at a 3-month high yesterday.
A
combined 873,000 tons of old and new-crop soybean 24-hour sales were sold to China and unknown.

US
CPC: Above normal precipitation favored for the northern Great Plains and upper Miss Valley.  Aug-Sep above normal temperatures. 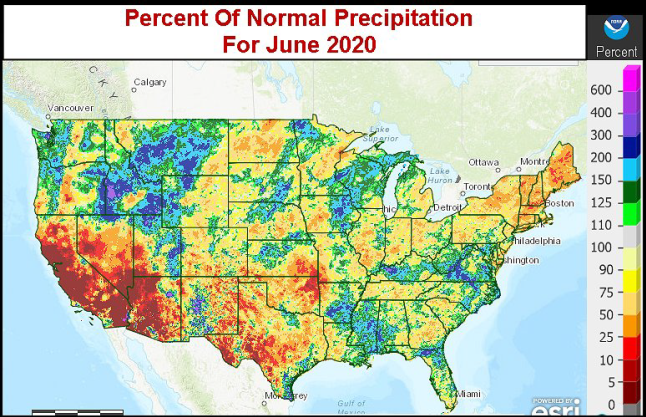 The
general theme for the coming week remains about the same as that of Wednesday with rain likely in most of the Midwest at one time or another and sufficient rain will be present to support reproducing corn and flowering soybeans. Very few areas will be completely
missed by rain, but some areas will need greater amounts to fully restore soil moisture after recent drying. Temperatures will be quite warm across the Midwest this weekend and possibly again late next week and into the following weekend which may accelerate
drying. Pockets of dryness are expected during the next two weeks, but a widespread generalized problem with moisture shortages is unlikely. A close watch on the distribution of rain is warranted because some of the rain advertised seems a little overdone
and pockets of dryness at the end of this month could fester into a more stressful environment in August if rainfall becomes more limited in the southwestern Corn Belt and Delta as expected. 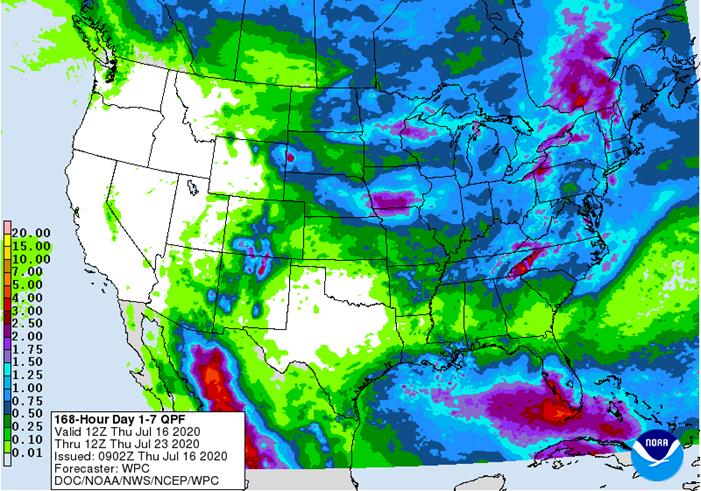 Today’s
forecast for the New Lands has improved over that of earlier this week with rising confidence. The strong ridge of high pressure and limited rainfall that has dominated this week will begin to break down this weekend, although today and Friday may again be
hot and dry. The breakdown of the ridge will be a gradual process and even though temperatures will become less oppressive during the weekend and early next week there will continue to be a warm bias and rainfall will be limited to scattered showers in only
a portion of the region. Greater “potential” relief may come along later next week and into the following weekend, although that period of time will need to be closely monitored due to the potential that the ridge might reassert itself on the region in future
model runs.

China’s
bottom line remains too wet for parts of the Yangtze River Basin and areas northeast into Jiangsu and possibly far southern Shandong over the next ten days. A better mix of weather is expected to the north, although some heavy rain is possible for a brief
period of time weekend and early next week. Far southeastern China may experience net drying for a while.

Today’s
model solutions have diminished some of the rain advertised for western Argentina, although rain is still expected late this weekend into early next week. Some of the reduction was needed and all of the rain that falls will be welcome, although more will certainly
be needed. Far southern Brazil rainfall was reduced in the 06z GFS model run and that change was needed after the previous model run was too wet. 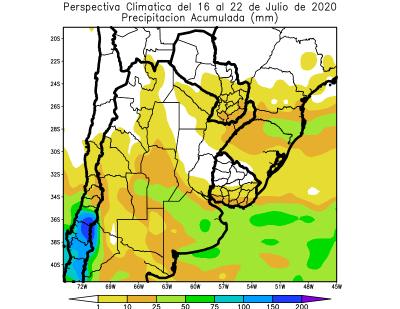 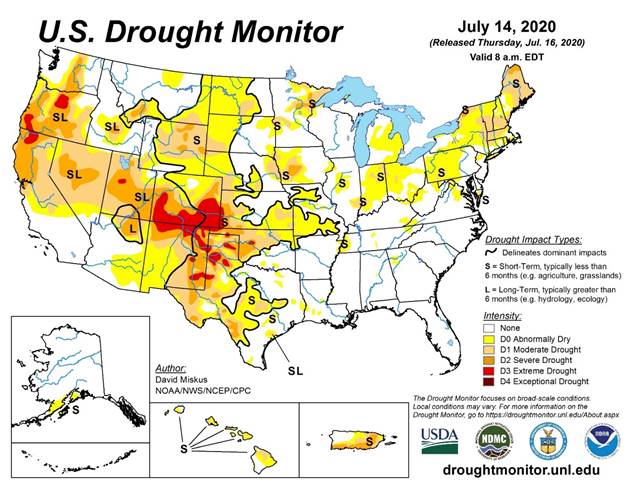 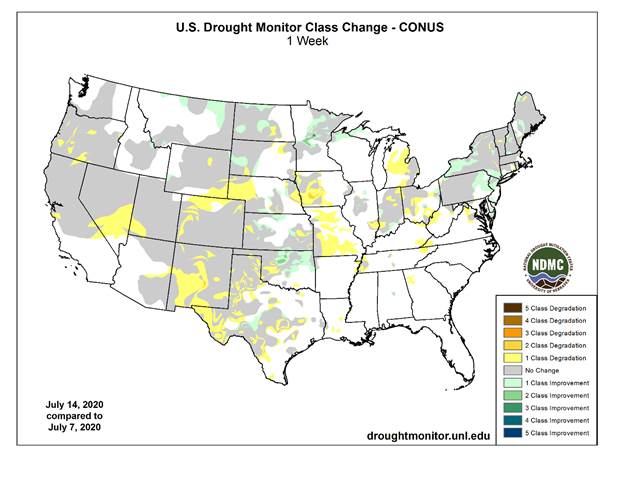 USDA
export sales showed new-crop corn sales below expectations despite the Chinese sale. China booked 768,300 tons of old crop corn and 600,000 tons new-crop.  Soybeans and meal were within expectations. Soybean oil on the lighter side.  Wheat exceeded expectations.
38,500 tons were recorded for pork and 72,700 tons for sorghum. 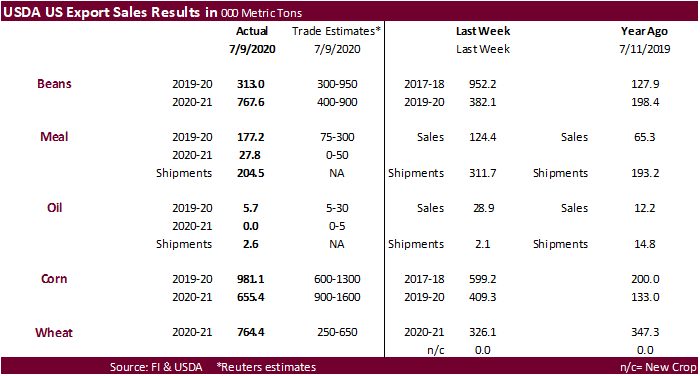 ·
The US generated 1.07 billion D6 ethanol blending credits in June, up from 841 million in May. 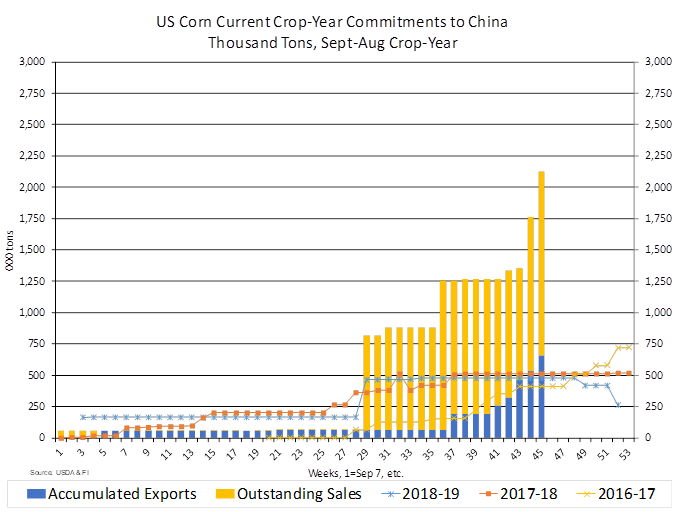 ·
The US generated 387 million biodiesel blending credits in June, up from 370 million in May.  The increase in credits was seen supportive.

·
We are starting to see US locations switch over to the November.

·
We heard China bought at least 3-4 soybean cargoes from the US for Q4 shipment.  Some mentioned up to 10 were bought. 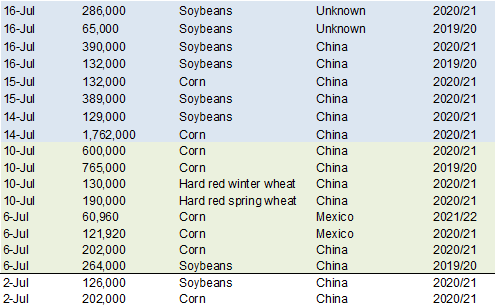 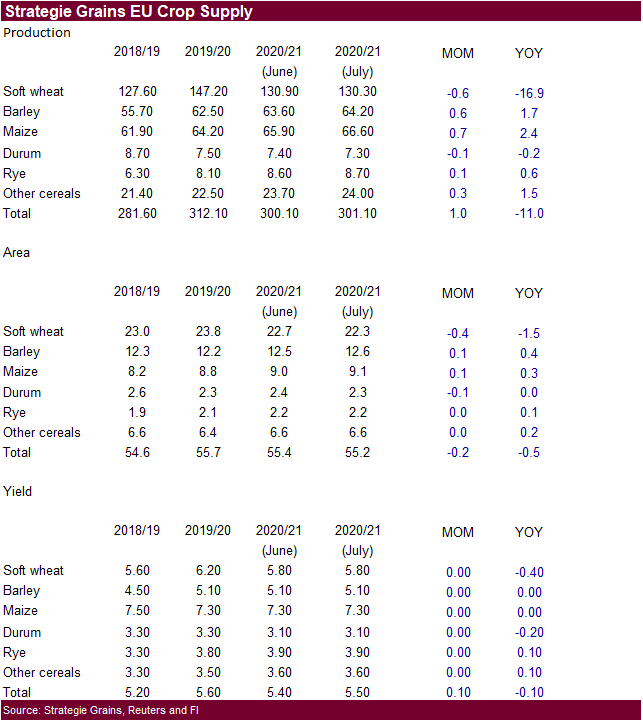 This
summary is based on reports from exporters for the period July 3-9, 2020.

Exports
for Own Account:
For 2019/2020, the current exports for own account outstanding balance is 100 MT, all Canada.

Exports
for Own Account:
For 2019/2020, the current exports for own account outstanding balance is 2,100 MT, all Canada.