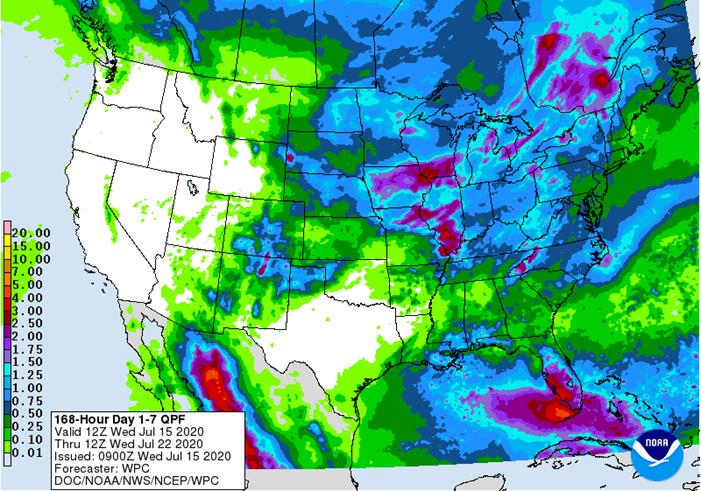 MARKET WEATHER MENTALITY FOR CORN AND SOYBEANS:  U.S. weather is advertised to be unsettled enough over the next two weeks to limit problems with moisture stress to small parts of the production region. However, watch closely, some very warm temperatures are expected in southern areas this weekend into next week that might accelerate drying and surprise some traders how quickly the ground has firmed back up again after recent rain. The majority of Midwestern crop areas will see a favorable mix of weather during the next ten days, but that does not mean a little moisture stress will not take place in a few pockets.

Concern over crop conditions in France and neighboring areas of the U.K, and Germany will continue as well as in the Balkan Countries and from eastern Ukraine to Russia’s Southern Region, despite some recent shower activity.

Worry over Russia’s central New Lands where sunseed is produced may continue this workweek, but relief is expected briefly this weekend into next week.  China’s biggest threat is due to flooding, but only a minor amount of corn, soybean and groundnuts are being lost from that event.

Australia and Canada’s canola crops are improving with little change likely. There are still some notable concerns about too much moisture in parts of Alberta and northwestern Saskatchewan and not enough in parts of the eastern Canada Prairies. Southern parts of the Prairies will be drying out soon.

MARKET WEATHER MENTALITY FOR WHEAT:  Most of the damage to world wheat has likely been swallowed by the market with recent USDA and other agency reports. Dryness continues in northwestern and southeastern Europe, Russia’s Southern Region and now Russia’s central New Lands, although rain is expected in the central New Lands this weekend into next week.

China’s spring wheat crop is likely developing well and Australia’s crop looks a little better as each weak moves along. Western Argentina, however, is still too dry. Argentina will get some rain late this weekend into early next week to offer “some” relief. South Africa has received some welcome rain recently to improve its western wheat crop, but small grains farther east are still quite dry.

Spring wheat in the northern U.S., Plains, Pacific Northwest and Canada’s Prairies varies greatly with too much moisture in western Alberta and some pockets of notable dryness from North Dakota into eastern Saskatchewan. 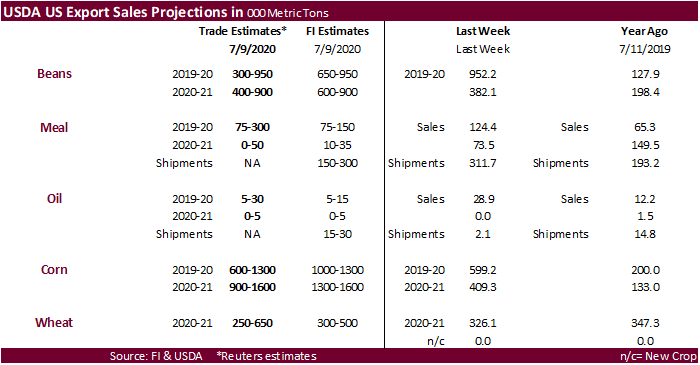 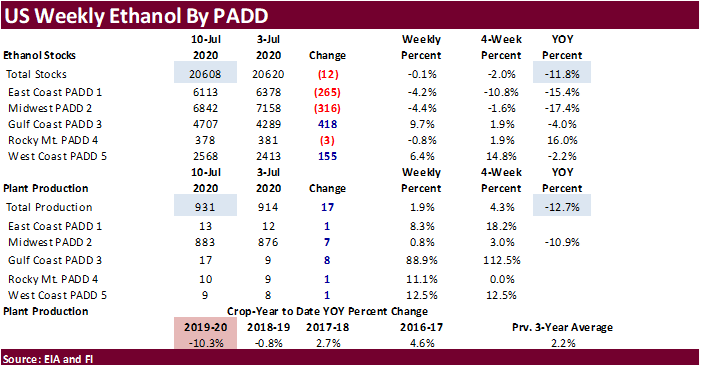 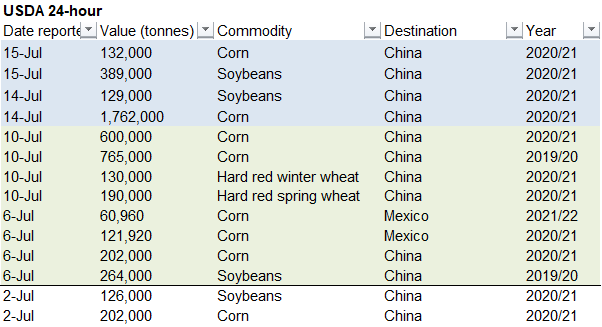 ·         Front month spreads were very firm against 2021 contracts in part to export demand, lack of producer selling and better than expected June crush indicating USDA might be on track after they lifted their crush estimate by 15 million bushels in the July S&D report.

·         NOPA reported a US June crush at 167.3 million bushels, 5.1 million above an average trade guess.  NOPA end of June soybean oil stocks of 1.778 billion pounds were 35 million below a trade guess and down from 1.880 billion pounds reported at the end of May.   The June crush was a record for that month.  Daily adjusted it improved to 5.58 million bushels per day from 5.47 million last month.  Soybean meal exports were good at 835,400 short tons and were the second highest for the month of June in at least 15 years.  Soybean oil stocks for end of June were the highest for that month since 2019.  With a large crush, implied soybean oil demand was good.  June exports were likely high.