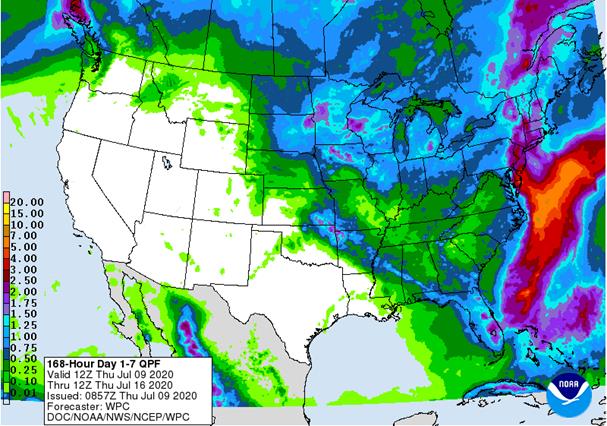 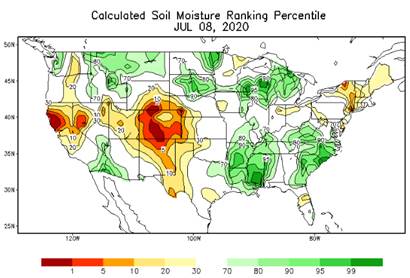 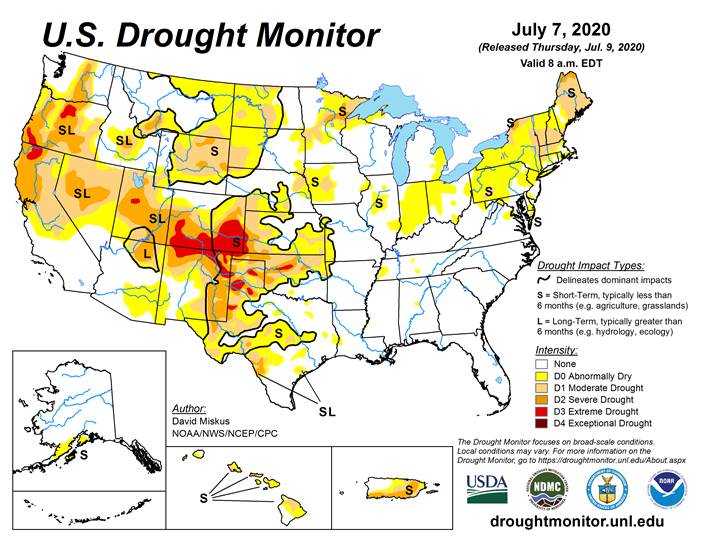 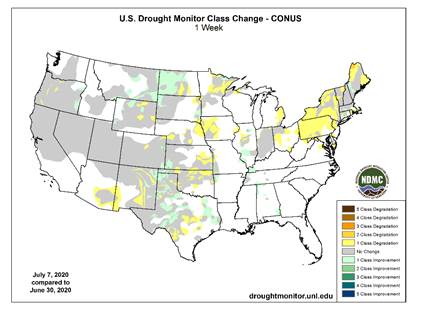 MARKET WEATHER MENTALITY FOR CORN AND SOYBEANS:  Concern over U.S. weather, northwestern Europe weather, eastern Black Sea weather and the central New Lands weather will maintain some bullishness to market mentality today. Worry over the lower Danube River Basin dryness will also continue. Weather in China may also be contributing some bullishness because of flooding, although most of the crop damage has not been in key corn and soybean production areas. Today’s U.S. weather outlook is drier for the second week of the forecast and a little hotter in the southwestern Corn Belt next week.

MARKET WEATHER MENTALITY FOR WHEAT:  Wheat harvest weather in the U.S. will be fair to good over the next ten days. Very good conditions are expected in western and central Europe and the eastern Black Sea region as well. Rain may be threatening grain quality in Eastern Europe, including western Ukraine, Belarus and western Russia.  China wheat quality may have slipped a little in recent weeks because of some rainy weather, but the winter harvest is winding down.

Spring wheat in northeastern China is in good condition. Some improvement in wheat is expected in Canada as rainfall increases in the Prairies, although some of the crops in the driest areas in Saskatchewan have already advanced too far to benefit from rain.  Crop conditions may also improve in parts of the U.S. northern Plains, but other areas will remain too dry. Rain is needed in the U.S. Pacific Northwest, although much of that crop is irrigated.  Crop conditions in southeastern Canada are rated favorably.

There is some concern over future Russia spring wheat conditions in the central New Lands where net drying is expected. 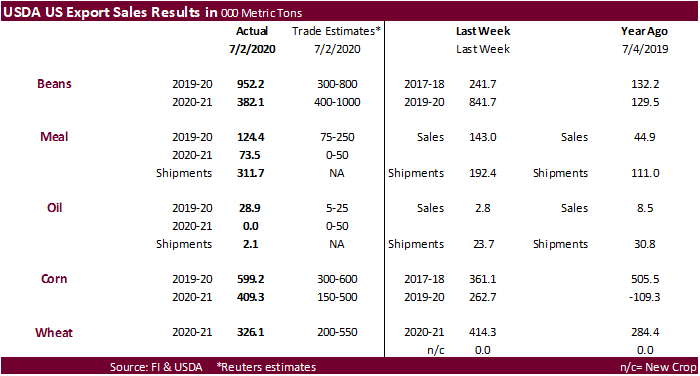 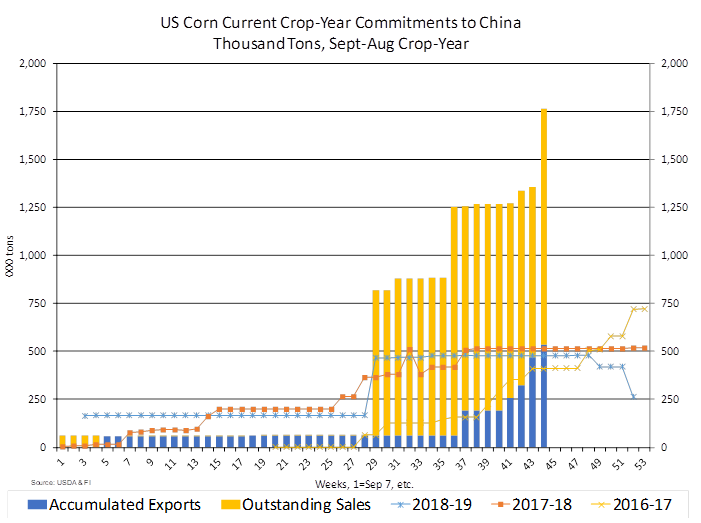 ·         China sold all of its 4 million tons of corn out of auction, bringing cumulative sales to 28 million tons, more than all of last season.  2020-21 China corn imports could easily end up more than the 7MMT cap.

Some people are asking if the corn yield will change this month from June.  Our thinking is no.

Some people are asking if the corn yield will change this month from June.  Our thinking is no.

What’s a comparable year to back this response?  We are hearing 2011 and 2012.  Since 2012 was extreme, let’s look at what happened in 2011.  Corn production declined 1% YoY, yields -5.6bpa.  Dry soil conditions and above normal temperatures during pollination limited yield potential.  Planted and harvested acres were +4% and +3% YoY.  Planting began slowly and delays continued through May, finishing by the 2nd week of June.  Early July weather promoted rapid development.  The second half of July through August saw much above normal temperatures, negatively impacting the crop.  Harvest proceeded at a normal pace.  Result: There were no changes in the US corn yield of 158.7 from June to July (158.7 was adjusted trend).  In August, USDA initial survey reported the yield at 153.0 bu/ac, then it went lower by 4.9 bu/acre in September 2011 to 148.1.  Final yield was 146.8, 8.1% below USDA’s adjusted trend yield projected in June.

For 2011 US soybeans, production was down 8% from the prior year, yield -2bpa.  Planted and harvested acreage was -3% and -2%, respectively.  Planting and emergence were slower than normal through the end of June.  Crop conditions were rated below the 2010 crop through most of the growing season.  Harvest was variable, but generally finished at a normal pace.  No change in yield is expected for 2020 from June to July.

·         US weather forecasts turning hotter and drier for the second week of the forecast.  Much of the rain predicted for this workweek has already occurred for the heart of the Midwest while the east will continue to see an active pattern in part to the tropical storm off the southeast.

·         SBO traded lower despite appreciation in South American soybean oil values. Thursday and Friday is a holiday in Argentina. Look for a possible large price swing in SBO prices when we return to work on Monday.

·         US wheat continued the rally today on concerns over global supplies.  Also helping wheat is short-covering and technical buying.  The spec short is near flat after the 2-day rally.  WU0 was able to break the 100-day moving average at 525.00c/bu, but unable to settle above it.

·         Note trade estimates look for the USDA to reduce new crop stocks and lower US production on Friday.  The US crop could end up below 2019 and well below a ten-year average. Below 2020 FI estimate.