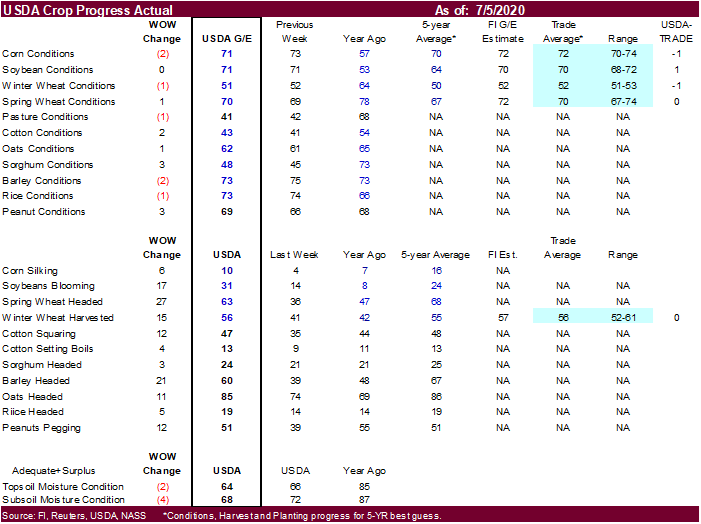 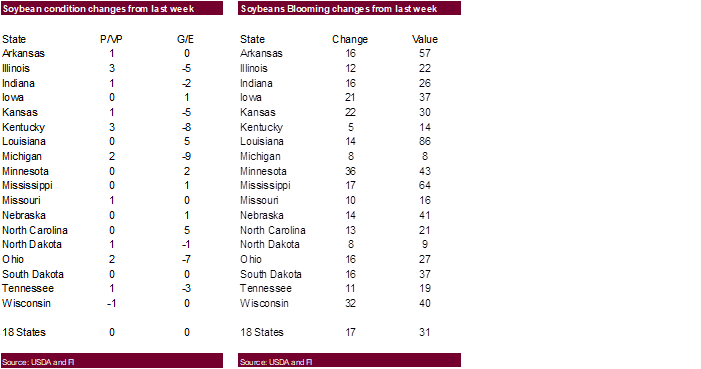 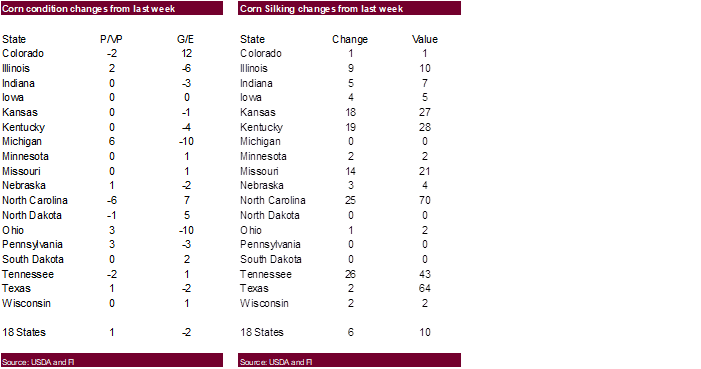 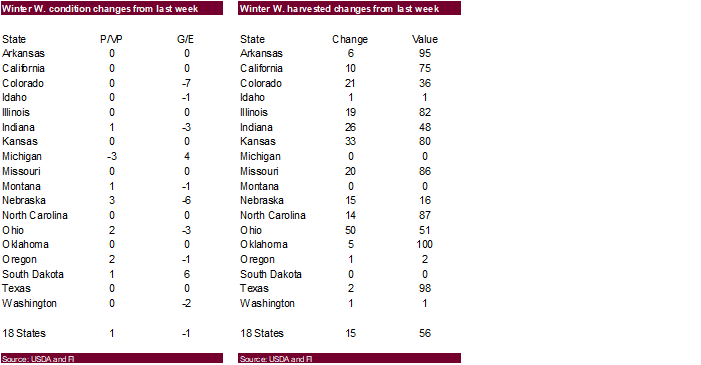 MARKET WEATHER MENTALITY FOR CORN AND SOYBEANS:  Concern over U.S. weather, northwestern Europe weather, eastern Black Sea weather and the central New Lands weather will provide some bullishness to market mentality today. Weather in China may also be contributing some bullishness because of flooding, although most of the crop damage has not been in key corn and soybean production areas.

Overall, weather today will likely provide a mixed influence on market mentality with a bullish bias.

MARKET WEATHER MENTALITY FOR WHEAT:  Wheat harvest weather in the U.S. will be fair to good over the next ten days. Very good conditions are expected in western and central Europe and the eastern Black Sea region as well. Rain may be threatening grain quality in Eastern Europe, including western Ukraine, Belarus and western Russia.  China wheat quality may have slipped a little in recent weeks because of some rainy weather.

Spring wheat in northeastern China is in good condition. Some improvement in wheat is expected in Canada as rainfall increases in the Prairies, although some of the crops in the driest areas in Saskatchewan have already advanced too far to benefit from rain.  Crop conditions may also improve in the U.S. northern Plains. Rain is needed in the U.S. Pacific Northwest, although much of that crop is irrigated.  Crop conditions in southeastern Canada are rated favorably.

There is some concern over future Russia spring wheat conditions in the central New Lands where heat and dryness are expected soon. 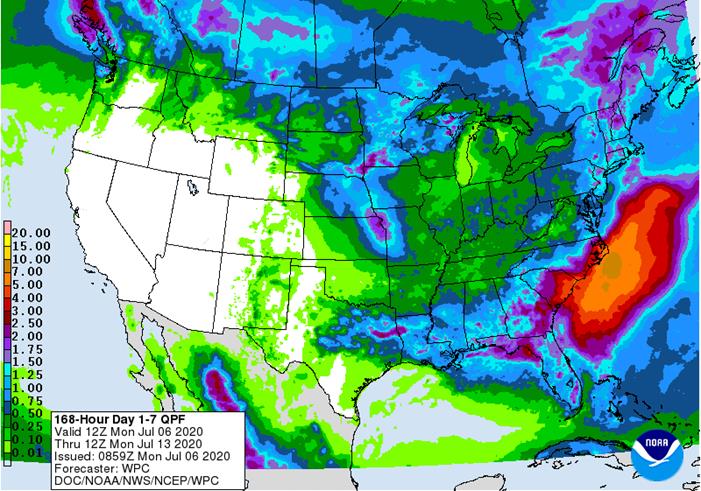 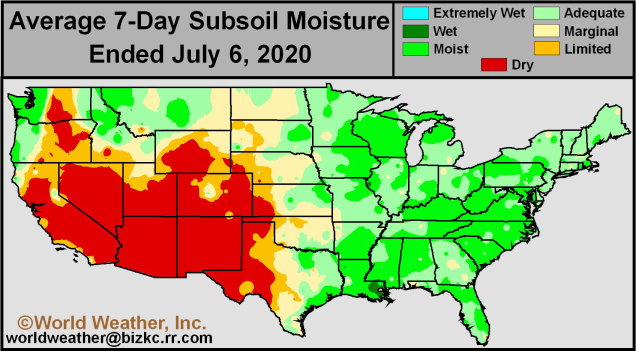 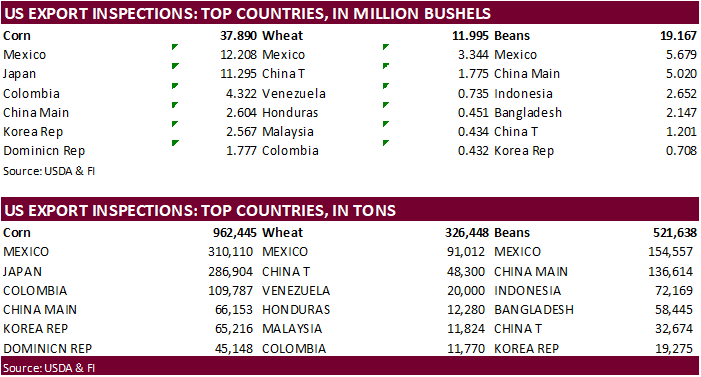 ·         CBOT corn traded higher led by bull spreading despite new-crop US crop concerns.  For the day, September corn traded in a narrow 4.5 cent range.  This does not seem very bullish given the current US weather situation.  China interest for US corn was seen supportive. USDA also reported corn sales to Mexico.  The corn sales for China indicate stocks might be much tighter than what USDA has penciled in.  China reserve sales have reached 24 million tons.  USDA projects China 2019-20 corn carryout stocks at 207.1 million tons, down from 210.3 million tons.  2019-20 stocks represent 66 percent of the global carryout.  In comparison, the US carryout was projected at 53.4 million tons.   Note Brazil fob corn is about $3-$4 cheaper than US Gulf corn.  USDA Attaché estimates 2020-21 China production at 250 million tons, 10 million less than USDA official. While total consumption is 278 million tons, above USDA official of 276 million (271 for 2019-20).  https://apps.fas.usda.gov/newgainapi/api/Report/DownloadReportByFileName?fileName=Grain%20and%20Feed%20Update_Beijing_China%20-%20Peoples%20Republic%20of_06-28-2020

·         The USD was under a good amount of pressure today in part to a rally in the Chinese yuan and uptick in positive US economic news.  The euro reached a 2-week high.

·         Late last week the US EPA put on hold their decision for 2021 US biofuel mandates.  It was expected to come out in late June or early July.

·         CBOT soybeans established a fresh 4-month high while corn was at a 3-1/2 month high on US weather concerns and a USDA 24-hour announcement for 264,000 tons of old crop soybeans to China.  Bear spreading was a feature.   Soybean meal and oil were also higher. August meal hit its highest level since April 13.  News was light. Global vegetable oil markets were firmer at the start of the week.  Egypt on Wednesday seeks 30,000 tons of soybean oil and 10,000 of sunflower oil for September 1-20 arrival.  A couple weeks ago Egypt bought 59,000 tons of soybean oil and passed on sunflower oil.

·         South American soybean meal when imported into Europe was $3 to $8 higher, in part to tightening SA supplies and weather worries for the US keeping a firm undertone for CBOT soybean meal. 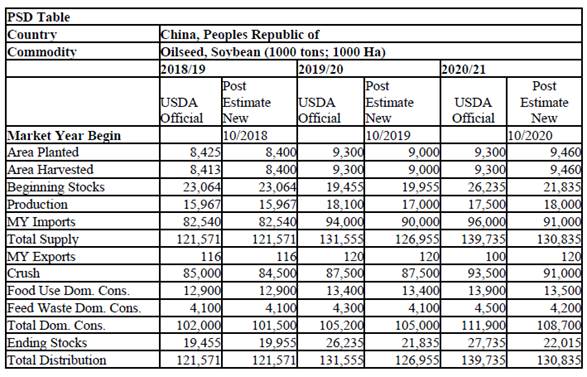 ·         Wheat ended mostly higher in Chicago.  KC and MN were up 0.75-5.50 cents.  Excessive heat across the US is expected to facilitate harvesting progress. 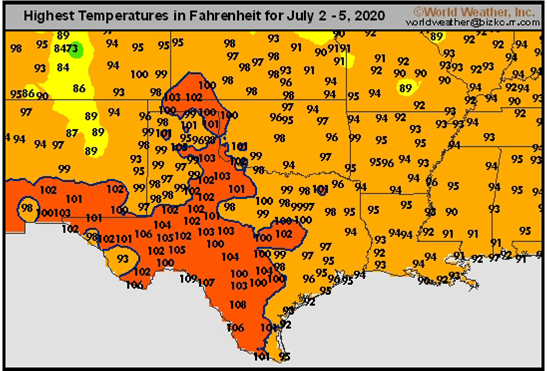 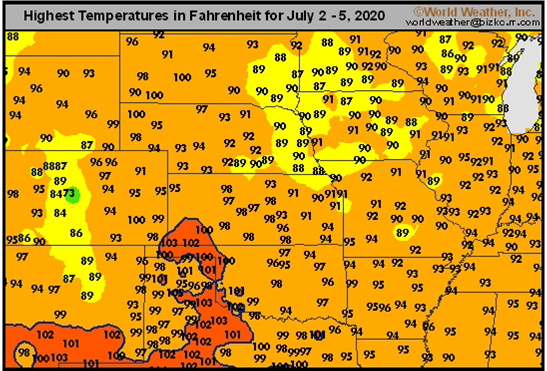