MARKET WEATHER MENTALITY FOR CORN AND SOYBEANS:  A less threatening U.S. outlook today has already shifted some market mentality, but with the long weekend coming up and the potential that many crop areas in the U.S. Midwest will be drying down over the next ten days the premium will stay in the market place and concern about long term crop development will remain especially with pollination expected July 10 through July 30.

Good crop weather is occurring in India and northern China’s main corn, sorghum, soybean and groundnut production areas are seeing a good mix of weather to support crops. Weather in Brazil is not offering any major changes to unharvested corn.

Canola conditions are improving in parts of Canada’s Prairies and Australia’s canola is establishing relatively well.

Concern over France, Germany and areas from eastern Ukraine into Russia’s Southern region will remain on the minds’ of many traders. 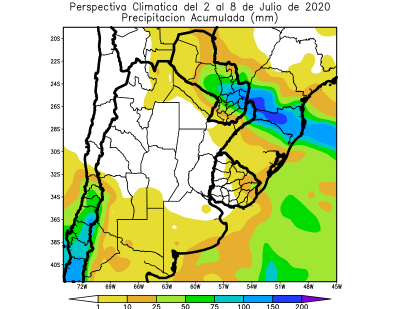 Wheat conditions in Canada are improving with rainfall this week and Australia crops remain in mostly good condition. There is need for rain in western Argentina, in many South Africa crop areas and in both Queensland and South Australia.

USDA export sales text can be found below the wheat comment.  It was seen neutral for the soybean complex and wheat, slightly bearish for corn.  Sorghum sales were good at 144,400 tons old crop and 68,000 new crop.  China took 594,000 tons of new crop soybeans.  Pork sales were 39,200 tons. 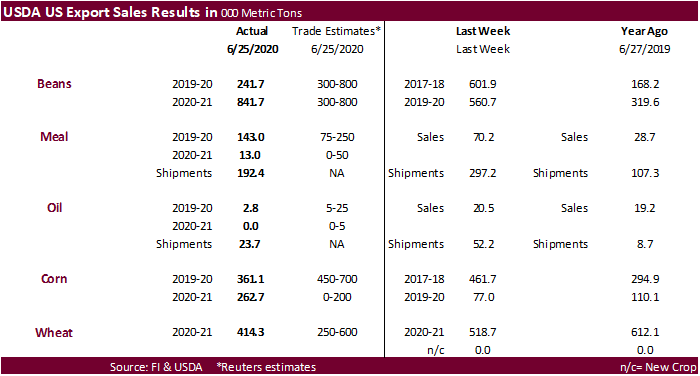 ·         Corn traded lower on profit-taking ahead of the long US holiday weekend following the bullish move from the stocks and acreage data earlier in the week. For the week, corn rallied almost 7.6% seeing the best week since mid-June last year.

·         There was buying noted from weather bulls as the US will see hot and dry weather next week over the Corn Belt.

·         The Sunday evening open may be active as we await the updated weather models this weekend.  Today’s run showed some additional moisture next week which pressured ag prices into the close

·         The EPA has shelved a proposal for the amount of biofuel blending refiners are obligated to use in 2021.  The anticipated target was 20.17 billion gallons for 2021 from the current 20.09 billion gallons annually.

·         USDA export sales for corn of 361,100 tons were below expectations and new-crop of 262,700 tons were just above expectations.   Shipments were a marketing year high of 1.44 million tons and included 144,300 for China-already known from the Monday export inspections report.

·         August soybeans ended slightly lower on the session giving up earlier gains on profit-taking following the best week for soybeans since mid-September 2019.  Soybeans finished the week up 3.6%.

·         Also weighing on the market is the thought of reduced soybean exports to China.

FAO world food price index showed a 2.2 percent increase for June from May

This summary is based on reports from exporters for the period June 19-25, 2020.