US agriculture futures surged at least for corn and soybeans amid a surprise downward adjustment in the US principal crop planted area.  Funds were active buyers in corn.

Bottomline was the acreage was bullish for soybeans, corn and wheat.

Implied 2020 US corn production suggests its down 1 billion bushels from June S&D after USDA lowered the planted area by 5.0 million acres from March Intentions. Soybean plantings increased 315,000 acres from March Intentions.  The implied soybean production is near unchanged from the June S&D, while wheat is 50 million bushels below June.  The cotton area was lowered 1.5 million acres.  All wheat plantings declined 405,000 acres due to a reduction in spring wheat of 390,000 acres and winter wheat of 225,000 acres.  The implied all-wheat production is 50 million bushels below the June S&D.  The acreage of the 8-major crops came in at 246.7 million, 6.720 million below March and all principal crops were down 7.2 million from March.   Some producers may have decided you can’t make as much money in some of these commodities than previous years.  With corn 30 under in parts of IN, for example, yields $3.20 basis the December.

Attached are some summary tables, including state by state for corn.  Area declined by most for the Dakota’s and Nebraska.  More tables and charts will be released later this week.

We are under the opinion the loss in the June acres from March will not sit idle.  Many of the producers may opt to take insurance this year, but some sort of cover crop could get planted.  Many of the acres that were reduced for corn were in states that saw too much rain (WCB and northern Great Plains) where yield potential might be limited, leading to abandonment.  Those state include Nebraska, South Dakota, and North Dakota, areas where corn basis has been depressed since the start of the 2019 harvest.  Producers don’t buy land for steady annual returns, rather for land appreciation.  Skipping a cycle is economically devastating but over the long run if history repeats, most producers will weather the storm.  Look for a possible large second soybean crop planted this year for the Midwest and Delta.

We lowered our corn for feed by 150 million bushels to 5.500 billion, 200 million below USDA.  Our corn carryout for 2019-20 is, for now, at 2.343 billion bushels, above USDA’s 2.103 billion estimate.  The all-wheat carryout of 1.044 billion was much higher than expected, and implies feed use for the year could end up near 75 million bushels versus 135 million USDA was using in June.  US soybean stocks of 1.386 million were near expectations.

MARKET WEATHER MENTALITY FOR CORN AND SOYBEANS:  Concern over U.S. crop weather during the next few weeks is rising with many forecasters offering drier and warmer biased conditions for key corn and soybean production areas in the Midwest. This developing concern and worry over ongoing dryness in the eastern Black Sea region and developing dryness in France will raise some market interest. But for today, the USDA report will likely have more influence than the weather, but the remainder of this week and next week will likely be more about the weather than anything else.

Good crop weather is occurring in India and northern China’s main corn, sorghum, soybean and groundnut production areas are seeing a good mix of weather to support crops. Weather in Brazil is not offering any major changes to unharvested corn.

Canola conditions are improving in parts of Canada’s Prairies and Australia’s canola is establishing relatively well.

Overall weather will likely begin contributing a more bullish bias to market mentality as a new drying trend gets under way in the U.S. while France and the eastern Black Sea region’s deal with dryness as well.

Wheat conditions in Canada are improving with rainfall this week and Australia crops remain in mostly good condition. There is need for rain in western Argentina, in many South Africa crop areas and in both Queensland and South Australia. 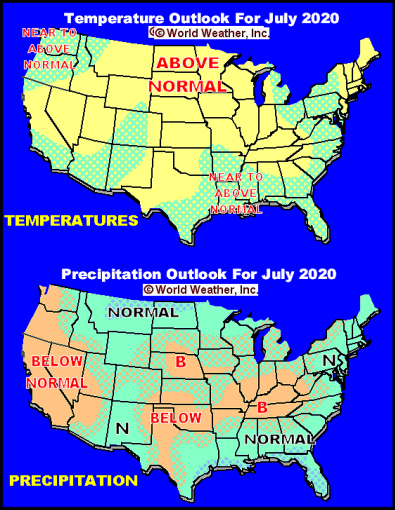 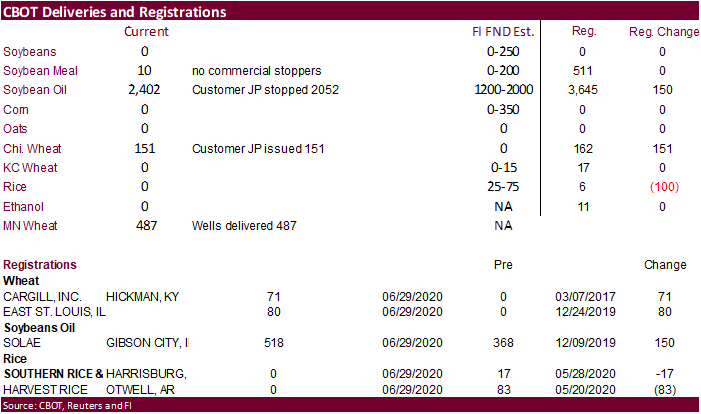 ·         Corn futures surged by most for the September contract since inception after USDA surprised the trade by lowering the US 2020 corn area by 5 million acres-largest planted area decline for the March to June period since 1983.  See comments above.  September corn touched its 100-day MA, a level it has not traded through since January 24, the start of the bear trend for the corn market.  Technically corn looks bullish, but we are still under the opinion a large supply will be seen for 2020.  USDA’s implied US corn production is down 1 billion bushels from June S&D.  25 million tons may seem like a large reduction but if the US export program fails to pick up steam from 2019, it won’t matter too much when already expecting a large carryout.  We see upside price movement over the next week limited on favorable US soil moisture conditions that should counter any dry spells after July 4th.  In our opinion, another good rain event for the Midwest and much of the US corn crop is made, then traders should shift their focus over to August weather for US soybean development.

·         China is seeing a reemergence in African swine fever that is sending domestic pork prices higher.

·         China looks to sell another 4 million tons of corn from reserves on Thursday.  China corn prices remain near a 5-year high.

·         August soybeans hit a three-month high during the session on smaller than expected rise in US soybean planted area and short covering prompted by sharply higher corn futures.  Soybean meal ended sharply higher by $5.50-$7.30/short ton and soybean oil was up 35-36 points.  The US soybean area was reported at 83.8 million acres, 900,000 below an average trade guess.  Note the implied US soybean production was nearly unchanged from USDA June S&D.  With soybean stocks as of June 1 also near expectations, we see little reason for USDA to make any major changes in the July US S&D balance sheets. In fact, with crush margins declining (see our updated US cash crush sheets attached), US demand might be lowered for 2019-20 from the previous month.  Many US crush plants are through to slow down the crush rates in August with many taking downtime. 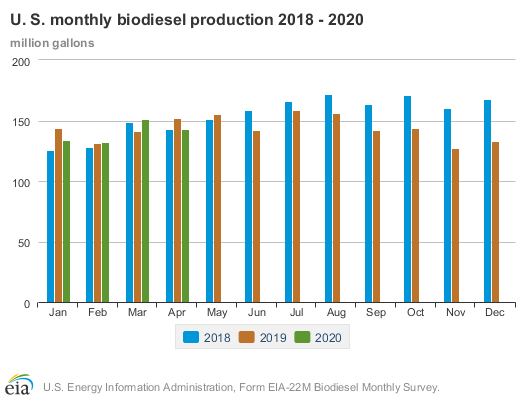 ·         US wheat futures ended higher led by the MN spring wheat contract amid declining US spring wheat crop ratings.  USDA reported a lower all-wheat planted area (spring and winter) yielding an implied US all-wheat production 50 million bushels below USDA June S&D.  The massive reduction in the US corn planted area from March centering around the northern Great Plains added support to MN wheat futures prices today on concerns that unfavorable weather may have had a larger impact on the crop than previously expected.

·         Ukraine exporters and government will meet in August to set a target on export quotas.