Today
was not an ordinary day at the office.  CBOT agriculture markets tanked, especially in the soybean complex where limits were expanded.  Soybean oil and corn ended limit lower. Today we may have seen some margin problems for some positions as indicated in price
changes for July soybean options.  USD was sharply higher.  Erasing some 2021 CBOT agriculture market gains over a one-week period was on everyone’s mind. • CME RAISES CORN FUTURES (C) MAINTENANCE MARGINS BY 9.4 % TO $2,325 PER CONTRACT FROM $2,125 FOR JULY
2021

Limits
for the soybean complex will remain unchanged for Friday but corn expands to 60.  Lumber and lean hogs expansions are in place as well.
https://www.cmegroup.com/trading/price-limits.html

GFS
weather model was wetter for the US while the European model is not as optimistic as they are much drier.  The trade looks as if they are agreeing with the GFS models that put good rains across the northern half of IA, lower WI, MI and other parts of the upper
Midwest.  Not all the drought areas of the WCB may see soaking rains over the next ten days, if realized.  Weather will continue to drive CBOT price fluctuations for a while.  Other fundamentals have been widely ignored this week. 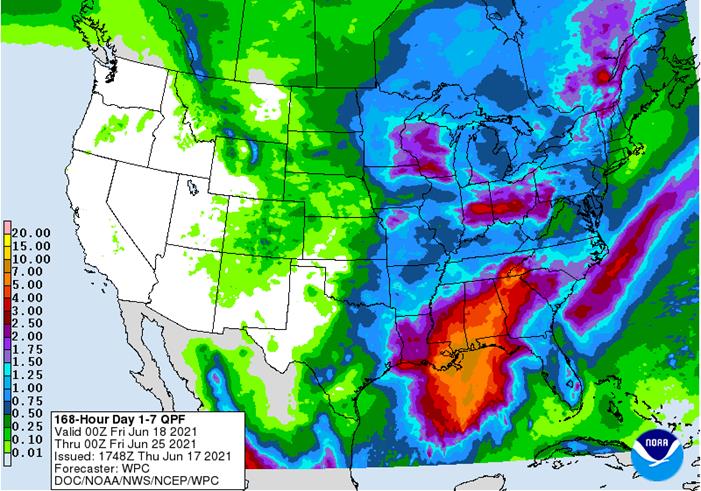 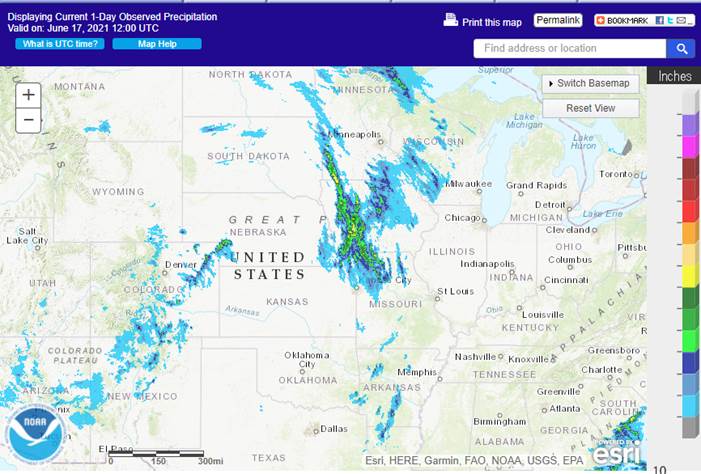 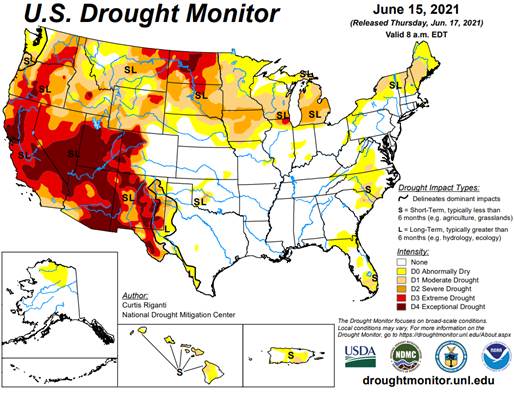 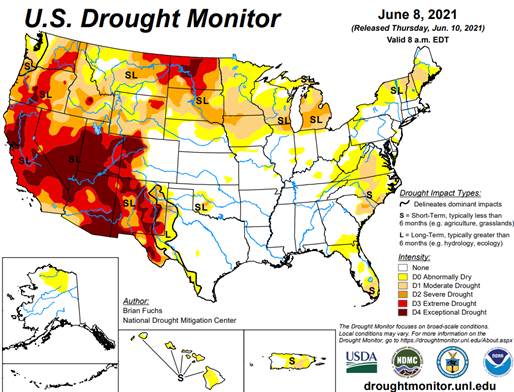 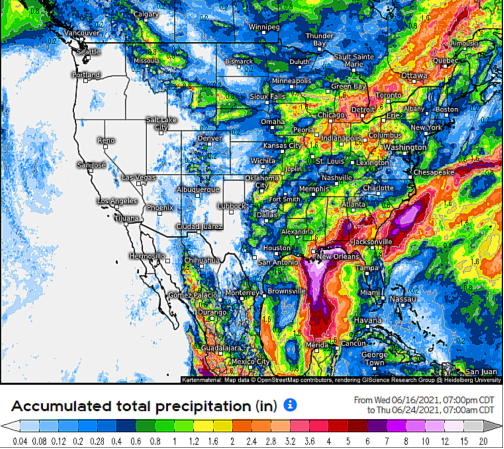 o
The heat and dryness will slowly expand to the west and north during the weekend next week impacting the lower half of the Volga River Basin, the eastern two-thirds of Russia’s southern Region

o
The long term outlook for establishment has been and will continue to improve as the drier areas of South Australia, northwestern Victoria, western New South Wales and Queensland gradually receiving improving rainfall

o
Wheat in Argentina still in much better condition than last year because of favorable soil moisture outside of the far west.

o
Some rain “may” evolve in the last week of June

o
The situation is not a big concern for now, but if rainfall does not improve during July the situation could change

o
The cool off will come with some needed rain will be good for summer crops by reducing evaporation, lifting topsoil moisture conserving soil moisture through slower drying rates

o
Too much rain is expected from southeastern Mississippi, southwestern Alabama and far western parts of the Florida Panhandle into northern Georgia

o
Not much damaging wind expected

o
Flooding will be the greatest concern

o
Harvest progress will advance around the precipitation.

o
The precipitation will not harm Safrinha corn, although drying will soon be needed to support maturation and harvest progress

o
Crop conditions and planting prospects will be good in the central and east, but concern about moisture shortages in the interior west will slowly rise

o
Most areas will get rain at one time or another by June 23.

o
Any precipitation will be welcome, but greater amounts are desired

o
Winter crop establishment has been favorable in the southwest, but unirrigated areas in Free State has been a little dry and rain is needed

o
Temperatures will be near to above average 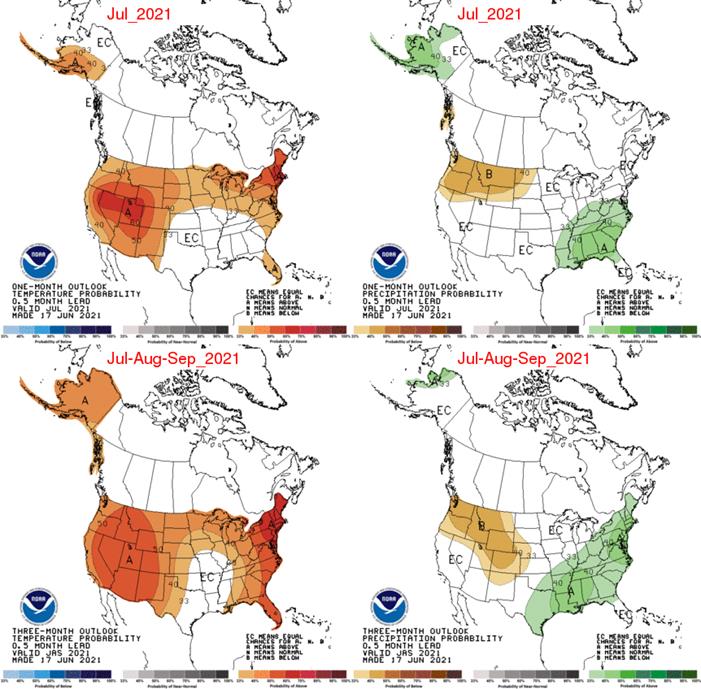 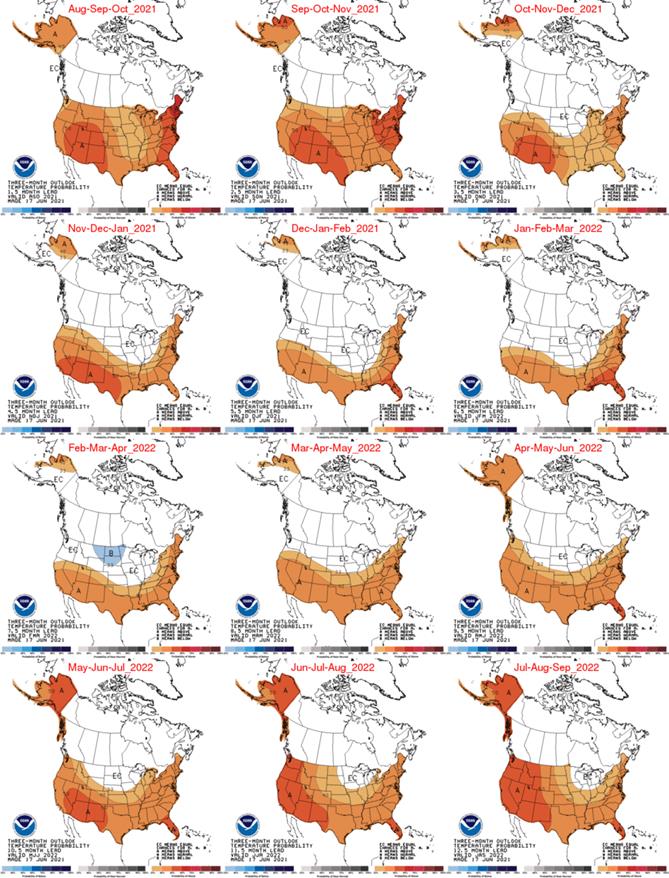 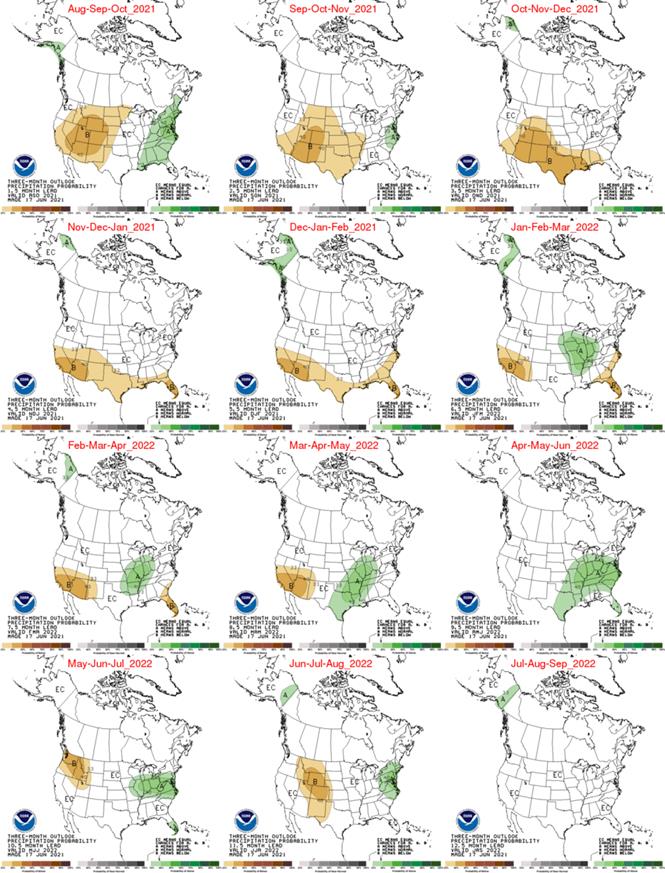 USDA
export sales were on the low side for many of the major commodities, but good meal shipments may provide a positive undertone for that commodity coupled by unwinding of oil/meal spreads.  Soybean sales were only 65,300 tons, within expectations, and not a
surprise as commitments is running 99 percent of USDA’s projection.  Corn sales of 18,000 old crop and 276,100 tons new crop were poor.  All-wheat sales cooled last week to 287,100 tons from 325,900 tons, negative in our opinion.  Soybean meal sales improved
to 177,300 tons and shipments were 199,000.  Soybean oil commitments were only 2,300 tons and shipments were off from the previous week at 8,000 tons.  We look for sales to improve next week amid break in futures prices. 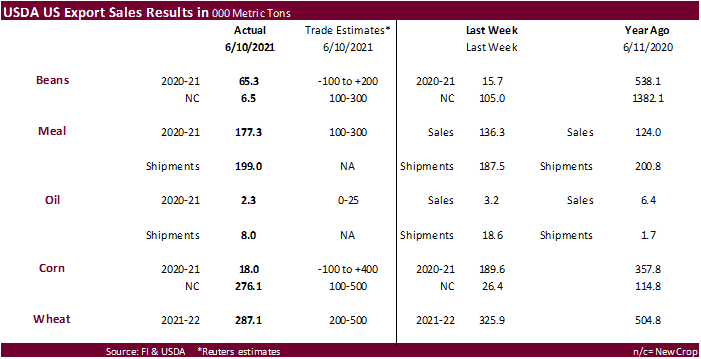 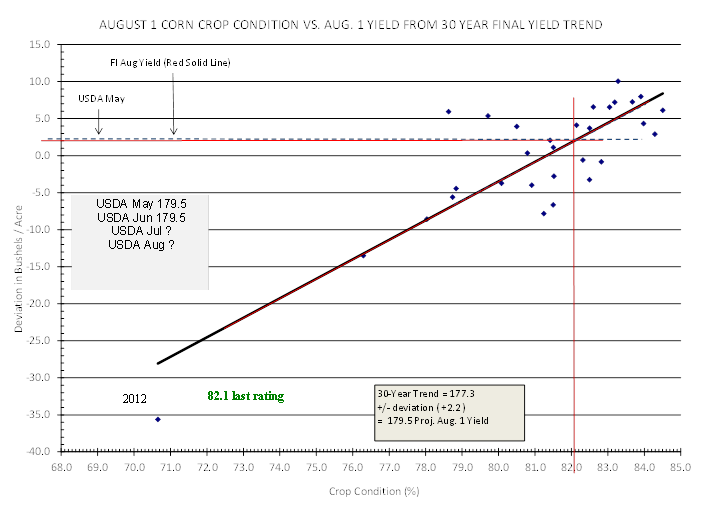